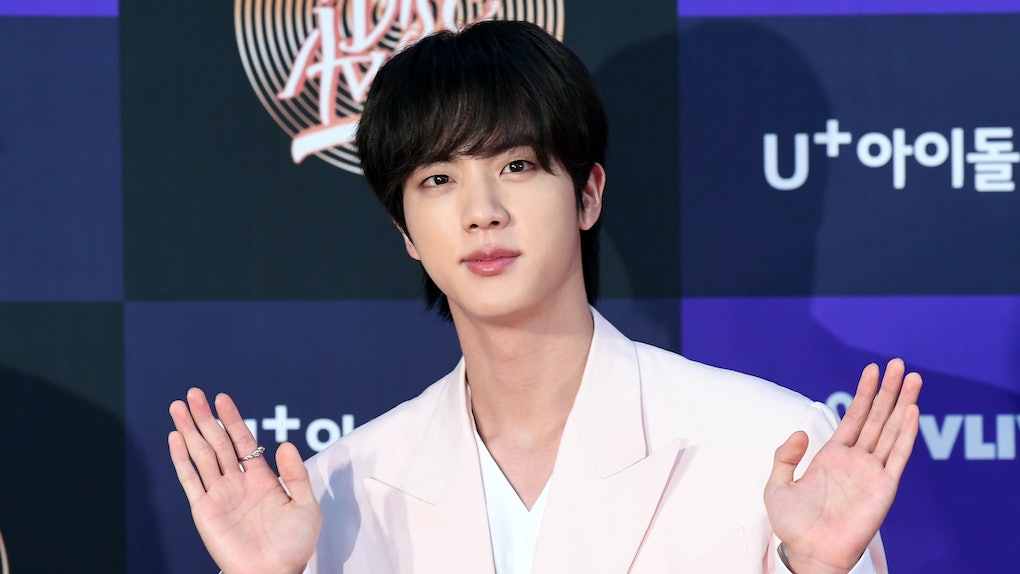 What Did Jin Do Before BTS? His First Dream Wasn't Singing

The talent in BTS runs deep. While RM, Jin, Suga, J-Hope, Jimin, V, and Jungkook might be best known for being the biggest boy band in the world, each member boasts an individual backstory of their own which helps set them apart from their bandmates. Jin, for one, had a totally different plan prior to being thrust into the music industry. For fans who have wondered, "What did BTS' Jin do before BTS?" the answer may surprise you.

Jin, born Kim Seok-Jin on Dec. 4, 1992, hails from Gwacheon, South Korea, and he's the oldest member of BTS. Being older than his bandmates definitely gives him a unique perspective on life, which carries out in his music. “As the oldest member, I think I experienced the world a little sooner than many people my age, so I think I am a grown-up," Jin said in the BTS Now 3 magazine. "I just act like a kid on purpose. But I feel like a grown-up when I talk to my friends and they ask for advice."

But, of course, Jin was working hard in the years leading up to his fate with BTS.

Jin might be the oldest member of BTS, but he's the youngest brother in his family, which means becoming the eldest bandmate was likely a big adjustment for him. Jin has an older brother, Seok-Jung, whom he's recently went into business with. The brothers seem to be super close. In August 2018, Seok-Jung opened Ossu Seiromushi, a restaurant in Seokchon Lake in Seoul, that Jin reportedly co-owns, and Jin even MCed Seok-Jung's wedding in August 2020.

Jin majored in acting at Konkuk University in Seoul, according to South China Morning Post. Jin graduated from the university in 2017 with a degree in art and acting, and later enrolled in graduate school at Hanyang Cyber University.

Jin had no intention of pursuing music until he was recruited on the streets, literally while getting off a bus. At that point, he was asked to audition for Big Hit Entertainment. Though Jin originally auditioned as an actor (since he had no formal singing or dancing experience), the company still saw something so promising in him. They asked him to become an idol trainee and join BTS, and he took the chance. The rest is history.

Before debuting with BTS in March 2013, Jin worked as a model. Jin modeled for, and endorsed, ETUDE HOUSE, a popular South Korean cosmetics brand. The makeup company praised Jin in a tweet just three months before he debuted with BTS.

Much like many of his bandmates, Jin also made a cameo in 2am's "You Wouldn't Answer My Calls" music video in 2010.

So much of Jin's personal life remains private, but what fans do know is they're so happy he chose to go with the flow and take a chance on singing, because it really paid off in the end.