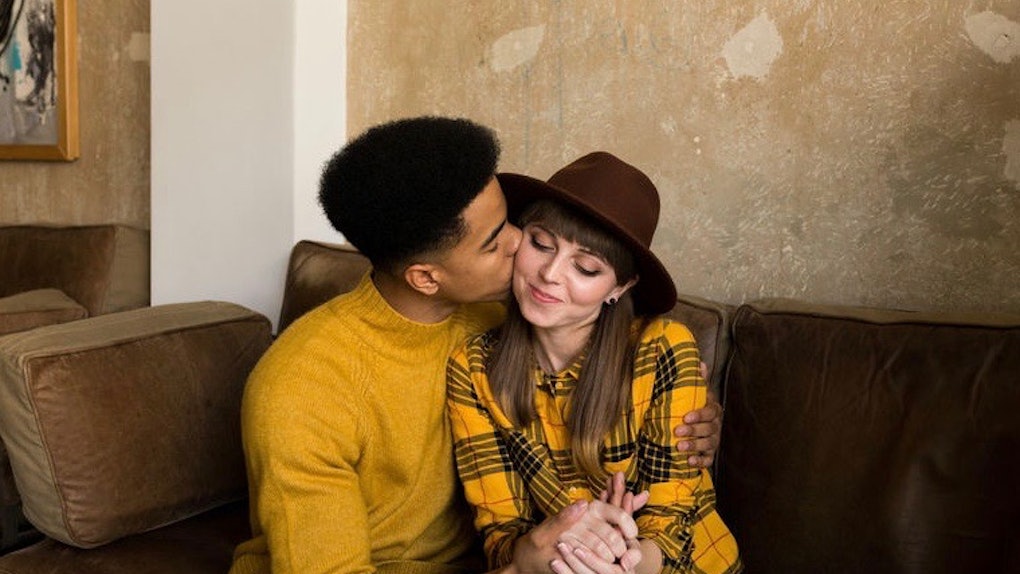 What Coming Out In A "Straight" Relationship Is Like, According To 6 Queer People Who've Done It

If you identify as bisexual, pansexual, or sexually fluid, you've probably faced a different set of challenges than someone who's gay or lesbian. You may have dealt with homophobia from straight folks, but biphobia exists too, and it's a double-whammy. Both straight and gay people alike might tell you that your bisexuality is just a "phase" or a stepping stone to being "actually gay for real." Another form of bi-erasure can happen when you're in a straight-passing relationship, aka a relationship with someone of a different gender. Coming out is already hard, but coming out while in a "straight" relationship can be extra tough for bi and pan folks because of all of that extra social baggage.

I'm a bisexual femme who's only had one serious, long-term relationship with a woman. When most people see us together, it's generally easy for them to wrap their heads around us. But my girlfriend, on the other hand, has had serious relationships with women and men. When she was about 15 years old, she was dating a guy we'll call Jared*. By then, she was also out to her immediate family and friends as pansexual. When she'd meet new people and mention her past relationship with a woman, they'd respond with reactions like, "Wait, I thought you were with Jared?" or "Aren't you with a guy right now?"

Now that she and I are dating, she might start a story with, "A couple years ago, my ex-boyfriend..." and get the same befuddled response. Her experience is far from unique, especially when it comes to coming out in a straight-passing relationship. Here are six other women and femmes on what their experiences were like.

You're Reminded How Much Your SO Loves You

I came out as bi to my boyfriend of five years this past summer. I'd always known I was closer to the middle of the Kinsey Scale than to one end or the other, but I'd been in relationships with men since I was a teenager. Being bi was never something I felt like I would be able to "act" on, so I never talked about it. After starting to work with a therapist, I finally had space to explore my feelings about women and femmes, and found that my queerness was actually really important to me to talk about as a part of my identity.

Still, I hadn't planned to tell my boyfriend about it. I didn't think he "needed" to know, since I didn't want to end our relationship. But one night, we were coming back from dinner and the conversation turned toward sexuality. I clammed up for around an hour before spilling that I liked people of different genders, then promptly burst into tears. He said he was glad I told him and that he loves me no matter what. (He also made some iffy male gaze-y comments in an attempt to lighten the mood, which I shut down pretty quickly.) But overall, we've been able to have very open and honest talks about what this means for our relationship which is... nothing, right now, because neither of us wants to practice non-monogamy.

For me, understanding my queerness is still very much a process and I've been beyond grateful to have his support. I still feel a bit of queer imposter syndrome — after all, I'm coming from a place of a lot of privilege in not just having his support, but also being seen as part of a straight-presenting relationship. It's still hard for me to feel "right" about taking up space in the queer community, but I've gotten a lot of support from my other queer friends who assure me that my identity, no matter how it's expressed, is valid.

I had to make some peace with the fact that there’s a possibility that I may never have a serious relationship with a woman. However, now he and I casually talk about women being hot when watching shows and movies. Liking women is one of the many things we have in common. It went from being an awkward thing for me to becoming a bonding thing.

When I came out, my partner’s parents called him all upset, immediately assuming we broke up. I posted on Facebook saying I was pan and non-binary. Within a half-hour, he was inundated with texts and calls asking if he was OK. He told them that we were still together and our hetero-appearing relationship had nothing to do with me being queer or not.

You & Your SO Will Might Have To Have Some Hard Conversations

I was deeply closeted up until the year after I graduated. I came out to my boyfriend while drunk at a party by leaning in and saying, "You know I'm not straight, right?" He was taken aback, but seemed OK with it, until a conversation we had a few weeks later where he said he wasn't sure if what we had was real. I think he felt threatened in a way. I don't want to speak for him, but it's possible he thought I was mostly with him because I'd been 'straight' almost all my life.

I definitely think there's a conversation to be had about the role compulsory heterosexuality plays in who we choose as partners before coming out. I didn't know how to articulate that at the time, while affirming I really did love my partner. I think over time he had less of a complex about this, because we've been together for nearly three years now. We've had mutual friends who were involved with women, who later came out as bi.

As for how my friends reacted, it's been mostly tacit acknowledgement — liking my tweets about being queer, for example. I like that they don't make a big deal of it, but it also makes me wonder who actually noticed I came out. Funny enough, I was more afraid of coming out to my friends, especially my college friends, than coming out to my boyfriend. If he didn't like it, I could leave him, but imagine being rejected by people who love you?

I was also scared because I had a friend whose (closeted) boyfriend cheated on her with her male friend. She was angry and hurt, and kept insisting he was "confused" or "actually gay." I'm still not sure if this friend knows [I'm queer], but I deeply hope that she does and that it didn't change anything between us.

Even though it might've made people look at me differently, I don't regret coming out. I felt like I'd been squeezed into a space that was too small for me all my life, and now I can breathe. It's weeded out people I don't want in my life anyway.

You Might Learn How To Bounce Back From Self-Doubt

It created a lot of confusion for me. I came out to my mom and she didn’t really say anything. When I’d talk to my friends, they would always be like, “Aren’t you in a relationship [with a guy]?” It made me second-guess myself and I’m still kind of getting over that. I didn’t really view it as negative, because it was a valid question. Not everybody’s first response is acceptance without question, and that’s OK.

I am bi and still dealing with the whole, super fun, "Am I Really Bi Because I've Only Dated People Of Other Genders"-impostor syndrome. I told my partner as we started dating, because I felt comfortable enough with him and we were best friends before we started dating. He wasn't really surprised and I had only recently realized I was bi earlier that year. I dealt with a lot of internalized issues with being bi after being called a ton of homophobic slurs in high school. My partner was unbelievably supportive and never treated me like he didn't trust me, even though I told him I was attracted to people of more than one gender. And he actually came out as bi to me earlier this year! So, it's a happy ending.

I'm OK with dealing with it! Most of my friends are bi, so I've had a really wonderful circle of people to talk to about it. My older sister is also bi. (We always joke about who's the gay cousin. She's the only one in my family who knows.) She came out to my family when she was 13. They said she was just confused and that she "had to choose one." Like, what? So, I keep it to myself and to my friends.

The whole experience made us both more comfortable with talking about sexuality with each other, as well as our needs and desires. And we also actively work to squash biphobia among our peers who may think that all bi people are unfaithful or confused. If we could have a needlepoint that says "No bisexual erasure in this household!" we would — except we're not out to our families, so that would be awkward.

Whatever your situation looks like, coming out in a straight-passing relationship might not always be simple or straightforward. Sometimes, you might feel a wave of relief that you have a partner whose hand you can hold on dates without worrying about sneers or double-takes. Other times, you might get nervous about the backlash of taking your boyfriend to pride. Whatever the case may be, having a supportive family and/or chosen family of friends who've got your back can be key to helping you thrive as a bi or pan person with past, present and future partners of any gender or identity.