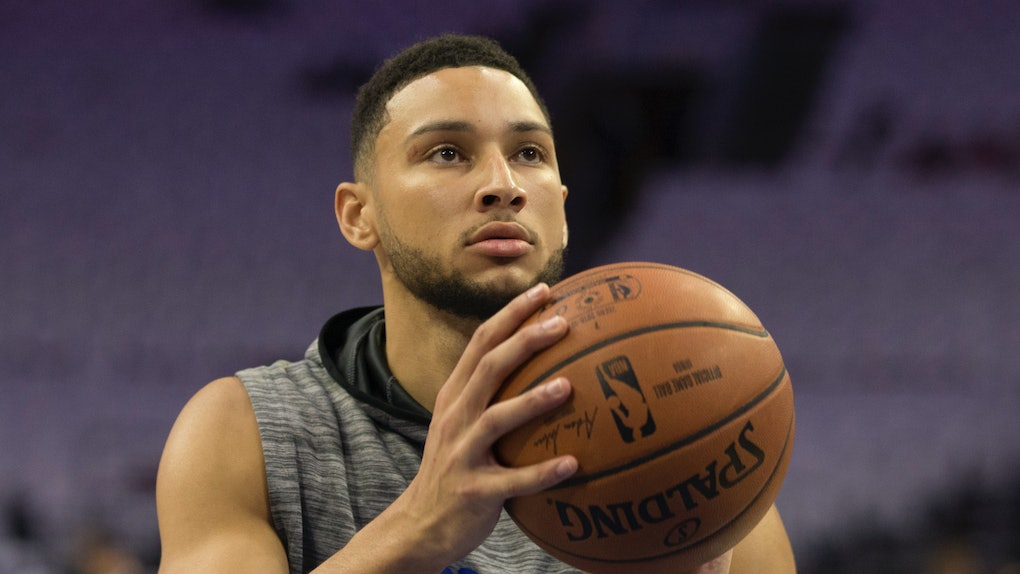 Ben Simmons has remained tight-lipped about his rumored on-again/off-again relationship with Kendall Jenner, and it's not surprising. Rumors that they're dating have been circulating since May 2018, and despite being photographed together several times, neither the supermodel nor the 76ers point guard has confirmed their relationship. But taking their zodiac signs into account, the fact that they'd be drawn back together isn't surprising at all, considering the connection between a Scorpio (Jenner) and Cancer (Simmons) is fire. It's actually one of the most compatible combos in the zodiac, in part because of what Ben Simmons is like as a partner. This water sign brings a grounding in emotion that the intense Scorpio both needs and ultimately really wants, and Scorpio passion helps ignite the same in Cancer. Plus, deep down, they both want the same thing: to feel secure and loved, and in one another they find that kind of lasting connection. Like I said, the connection is intense.

While we can see why Scorpio and Cancer go well together, what is it exactly that a Cancer like Ben Simmons brings to the relationship? What is a Cancer like when they're in love? The answer is complicated. This is a sign that is both fiercely self-protective and deeply vulnerable. That combination can be simultaneously frustrating but also endearing. Here is what we can guess Simmons is like in a relationship based on his zodiac sign.

Cancers are ruled by the Moon, the heavenly body associated with emotion. Add to that the fact that they're a water sign, which are notorious for tending toward emotional depth, and you have yourself a partner with seemingly endless amounts of love to give. Cancer is compassionate and sweet, and once they feel secure in a relationship, they can let loose their passionate side. This also means they are traditional romantics. Poems, flowers, and songs are not out of the question. And if your Cancer man is one who has some coins, this also means grand gestures like spontaneous getaways and jewelry.

He can be insecure.

Falling in love requires vulnerability, and this can create a real struggle for cancer. Not because he can't be open, but because beneath his shell, it’s all vulnerability. When he has to lower his walls, those insecurities rise to the surface. As a result, Cancer goes hot and cold or becomes overly clingy. However, given time and reassurance, he can get over these fears and be his full confident and loving self.

He avoids conflict — sometimes a bit too much.

Cancer men despise confrontation; it just brings up too many negative emotions. So, instead of confronting problems or how they feel, they tend to bottle it up and hide it from their partner until it inevitably boils over. The key is for Cancer to find a partner who embraces their emotional side and encourages them to speak on whatever is weighing on their heart and mind.

Because physical affection and emotional affection are strongly linked for Cancer, this is a sign you don't have to worry about straying. They also aren’t liars — unless you consider lying by omission. This is where Cancer can get themselves into trouble. Their tendency to keep secrets comes back to their need to be self protective. They hold in things they worry would hurt others, or just to have the security of knowing they have something they’ve kept to themselves. It can be very frustrating as a partner, but being with a Cancer has so many pros that it’s hard to hold a few benign secrets against them.

He prefers making love to having sex.

Cancers are not the most sexual sign in the zodiac. It’s not because they don’t enjoy it, but because their biggest erogenous zone is their heart, they don't tend to pursue it as much as, say, a Scorpio or a Taurus who just revel in physical touch. No, this is a sign that needs the body-heart connection to really ignite their passion. Which is why sex with Cancer, even when it gets wild and kinky, is always love making rather than just casual sex.

So, as you can see, it would be hard to quit a Cancer like Simmons. No wonder Jenner keeps popping up courtside at his games. Just sayin’!