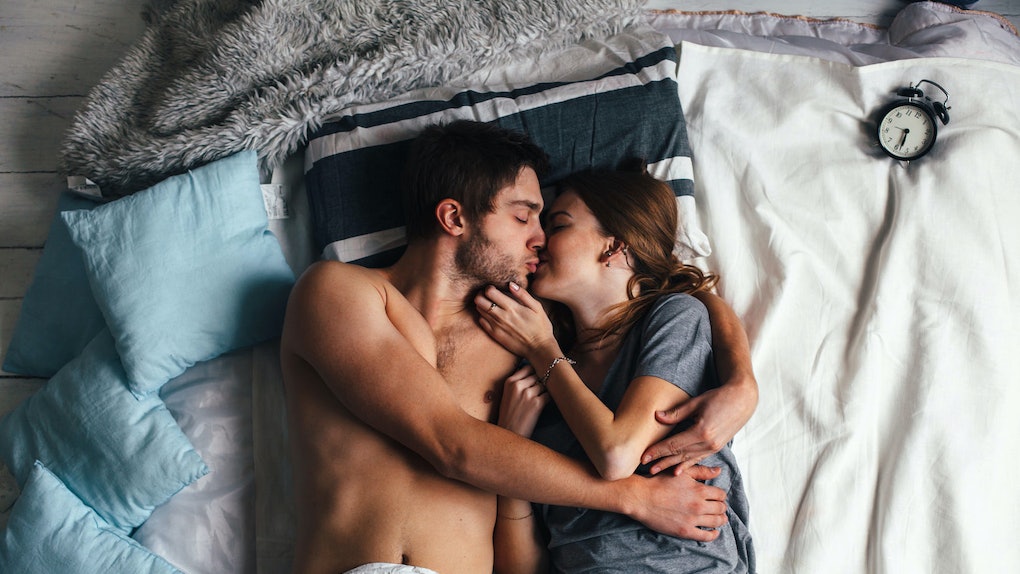 What Being Too Tired For Sex Really Means For You & Your Partner, According To Experts

As great as sex is (and let's just get that out of the way, first and foremost: Sex is great), there can be times when you're just not feeling it. Do you know what I'm talking about? Sometimes, no matter how much you want to have sex, you're just too tired, or bloated, or sick to get it on. If this happens from time to time, there's no need to fret. We're all just human after all. But if you're constantly finding yourself turning down sex, then you might want to know what being too tired for sex really means — especially what it means for you and your partner. Now, to clarify, it's completely OK if you're just plain exhausted and not in the mood for sex sometimes. But there might be a deeper issue if it happens repeatedly, and it should probably be addressed.

Firstly, being too tired to have sex can mean you are just plain tired. Dr. Jennifer B. Rhodes, licensed psychologist and forthcoming author of Toxic Insecurity: Our Search For Authentic Love tells Elite Daily, “There are a lot of factors that can contribute, but if your body is tired and you haven't been listening, you need to start listening.”

However, if this isn’t the case, it’s time to ask yourself some questions. Sex expert Lola Jean tells Elite Daily that you have to ask, "Is being tired becoming a pattern? It is an excuse?" She explains, "You can’t blame lack of energy for sex on a failing relationship, [and] there are likely other conflicts and items at bay. Like any conflict, approach the situation honestly and without judgement or defense if it’s a matter you want to talk through and understand." It's important to remember that sex is intimate, and talking about it is crucial in any relationship, even though it can be scary sometimes.

Rhodes suggests there may be underlying issues in your relationship, and you shouldn’t avoid opening up about it. She explains, “If your body is not tired then you may be avoiding intimacy or something is going on with your hormones. If this is an ongoing issue, you need to talk to your partner about it.”

If your partner is the one who is always too tired, evaluate what they might mean when they're using it as an excuse not to have sex. "It could mean that they don't enjoy the sex they're having but can't or won't verbalize it to their partner," Fehr says. "It could be that sex hurts but they are ashamed to say it. It could be that the couple has some un-repaired or unresolved hurts, and it's a way to avoid facing intimacy while you feel distant from your partner." Basically, if it's just an excuse, then they could be hiding any number of feelings. Sadly, lying about being too tired "can be a way to punish your partner by withholding sex," adds Fehr.

"As much as sex is a relaxing and energizing activity, it also requires energy, attention and presence," explains Fehr. So, if true exhaustion is the only issue with you and your partner, then don't stress about it. "People who work long hours, have intense jobs that either require a lot of physical energy or attention or interacting with people and/or children, struggle with illness, or have internal stress that's taking up their energy (e.g., financial or relationship stress) may not have the energy they need to have sex," says Fehr.

Other stressors in life can also add to the feeling of being tired. “Everything that is associated with stress can wreck your sex life,” Rhodes explains. Some common issues she points to are: “working too hard, not having fulfilling friendships, a family crisis, or feeling financially stressed.”

Before you worry that there's something wrong with your sex life, evaluate the nature of your lives. If one or both of you is super stressed or overworked, then that's probably all it is. It's hard, but it is in no way an indicator of how much your partner loves or cares about you.

On the other hand, if you know that "I'm tired" is just an excuse, then it's time to talk it out. "Have a conversation with your partner from a calm, compassionate, and curious place — not blaming or accusatory," Fehr advises. "Be curious about them: ask them about their experience, what's it like for them, what they might want or need from you to have sex. Try to understand them. Then, tell them how you feel being in your position, what it feels like to be rejected, and what you want and need. Be understanding and also stand in your own truth."

If you don't communicate about the lack of sex or the constant "I'm tired" excuse, then things could come to a head. "If a couple notices a pattern, and it is left unaddressed, then this can mean that the couple is growing apart," Fehr advises. "When couples avoid speaking about what's going on for them and asking for support or what they need — enabling change or shift toward resolution — it's likely that there is an unresolved hurt or pain underneath. The more a couple leaves the issue unaddressed, the further apart they grow."

"It is rarely the reason why sex wanes is because the partners are not interested in each other," Fehr explains. "Sex is a reflection of a couple's connection and intimacy, therefore when it wanes, it is usually because of a break in connection or trust."

Whatever you do, Rhodes urges couples not to ignore the issue, saying: “Talk to your partner and come up with an action plan. This is a big issue that should not linger.” If you can’t find the answer on your own, she suggests you should “seek professional help if you can't figure out what is going on.”

This article was originally published on Sep. 21, 2018