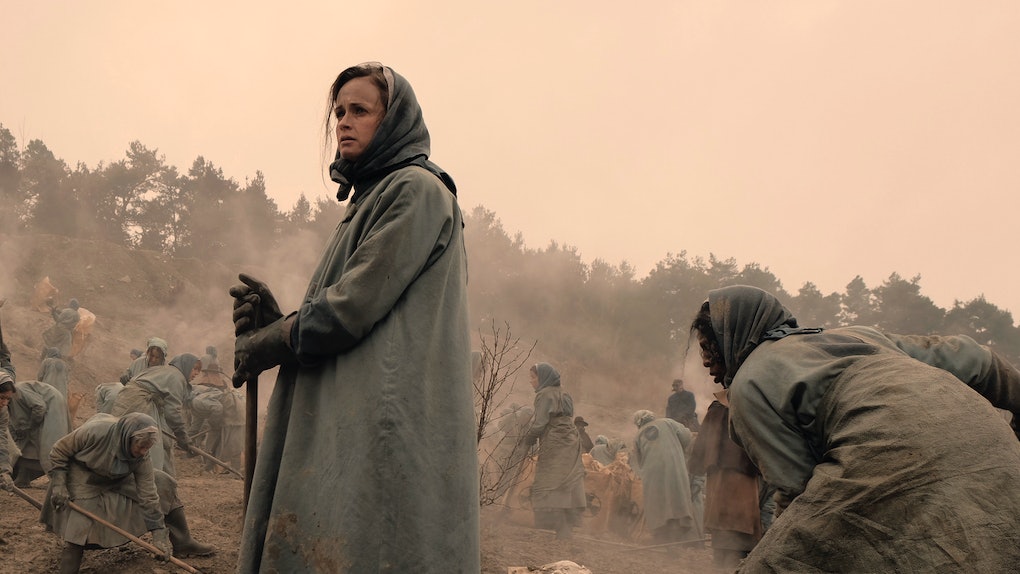 What Are The Colonies In 'The Handmaid's Tale'? Emily Is Working There In Season 2

With the end of The Handmaid's Tale Season 1, the series reached the end of the material contained in the original Margaret Atwood novel as well. That means Season 2 will be a deep-dive off into the unknown, with the show exploring territory that Atwood herself either couldn't due to the novel's structure, or wouldn't have thought to due to the time period. One of those characters who can carry us into uncharted territory is the original Ofglen, aka Emily, who has been sent to "The Colonies." What are The Colonies in The Handmaid's Tale? Where are they?

The entire story of Emily is mainly one made for the television series. In the books, Ofglen disappears early on after first telling Offred about Mayday, and is never seen again. We never learn her name, or that she was LGBT and married to a Canadian woman who escaped. The female castration she undergoes to control her sexuality isn't a part of the books, nor is her return as "Ofsteven."

Part of that is due to when the original book was written back in 1985. This time included the blossoming of the AIDS crisis, which peaked two years later in 1987. Emily was simply not a character imaginable in that time period.

Alex Bledel, who plays Emily, was upped to a season regular this year, which confirms the show plans to dive deeper into her story. But all we know for now is that the last time we saw her, she was being led away to a black van after a desperate escape attempt at the marketplace. Leading into Season 2, all the show has told us is that Emily has been sent to "The Colonies."

1. The Colonies Are Never Seen In The Book

Like Emily's story, The Colonies are not something we ever see in the novels. They are merely referenced in a menacing manner as a place people are sent to die. From the brief references on the page, they seem to be somewhere in Middle America, an area that's become uninhabitable due to radioactive waste. Exactly how or why an area of the flyover states got that way is unclear. The books seem to suggest a mix of pollution and nuclear fallout. The TV show has not dived further into it as of yet.

The books suggest that there are less bad parts of The Colonies that one can be sent to, picking fruit or cotton, which sounds like a more southern area, where there's less (or no) nuclear fallout. The TV show has not brought that up at all so far.

What we do know is that the idea of being sent to The Colonies frightens people. Moira, given the choice between enforced prostitution at Jezebel's or being sent to the Colonies, not only picked Jezebel's but was happy to be given the opportunity to make that choice.

There's also a threat hanging over the Handmaids that if they do not conceive within a certain period of time, they will be sent there as well, having been proven "unfertile" and therefore "unwomen." (Even though, as we know with Offred, she's able to conceive just fine.)

3. No One Comes Back From The Colonies

As for what Emily is doing out there, and how she survives her trip, that hasn't yet been revealed. As far as anyone knows, those who do go out to The Colonies do not return. Whether they die within a year or within five, the result is the same. Let's hope that in Season 2, Emily somehow manages to find a way to avoid this fate.

The Handmaid's Tale Season 2 arrives on Hulu with the first two episodes on April 25, 2018.

More like this
These Tweets About Regé-Jean Page Leaving 'Bridgerton' Are Royal Bummers
By Cianna Garrison
5 Facts About Courtney From 'The Circle' Season 2
By Dylan Kickham
Katie Thurston's 'Bachelorette' Season 17: Cast, Premiere Date, & More Info
By Abby Monteil
Stay up to date