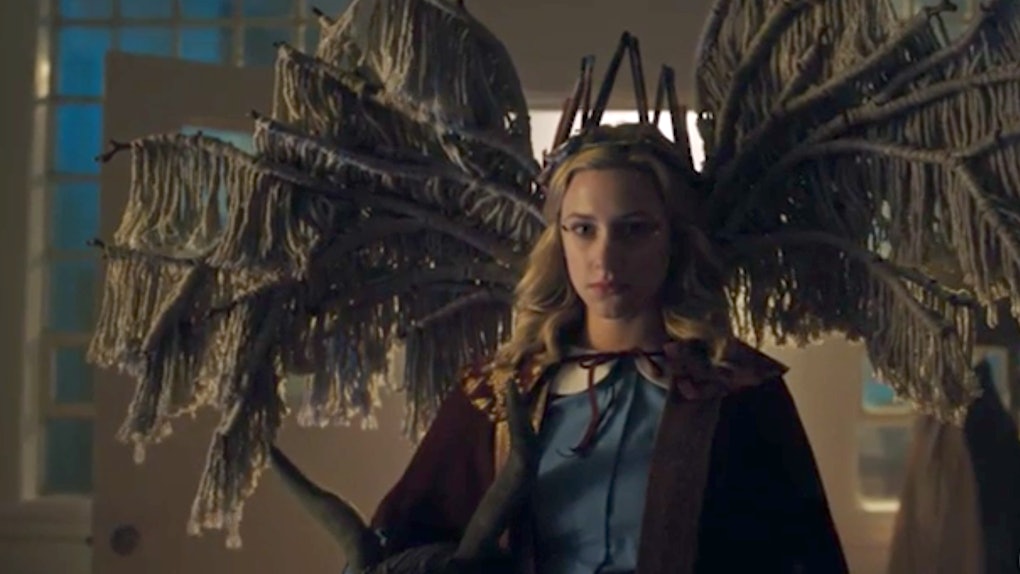 What Are Hiram & The Gargoyle King Planning? 'Riverdale' Just Revealed An Evil Alliance

Everything is finally coming together on Riverdale... I think? All season long, the teen drama has thrown fans for a loop with a million seemingly disconnected storylines. Prison? A masked killer? An evil board game? A cult? The mafia? How is it all connected!? Well, the midseason finale brought us closer to the answer. Spoiler alert: This post contains spoiler from Riverdale Season 3 Episode 8, "Outbreak." At the end of the episode, we see that Hiram Lodge and the Gargoyle King are working together. So, what are Hiram and the Gargoyle King planning, and how does this revelation help us narrow down who could be behind that mask? Let's get into it.

When Hiram Lodge first showed up in town at the beginning of Riverdale Season 2, we all knew he was up to something devious. Since that season's primary mystery with the Black Hood, pretty much every fan naturally assumed that Hiram was the man behind the serial killer, but it turned out that he was not involved at all. Hiram's real evil plan was to buy up Riverdale's south side and turn it into a giant prison, which would be a front for a drug ring. He shared this plan with a select few allies who agreed to help him: Penelope and Claudius Blossom, Sheriff Minetta, Penny Peabody, and the Ghoulies leader Malachai.

Now, Hiram's plan has reached its next phase. His prison (which I am not sure whether is built yet or not) is pumping out the new drug Fizzle Rocks, which Betty discovered causes hallucinations of the Gargoyle King. He also managed to shut down Riverdale High after a wave of mysterious seizures hit students. And in the end, he got all of Riverdale blocked off from the rest of the world by quarantining the town.

It seems pretty clear now that Hiram and Hermione were somehow behind the mysterious seizures, which allowed Hiram to achieve his goal of quarantining Riverdale... although it is still a mystery how they were able to induce seizures. It definitely seems like Hermione is more the mastermind behind the seizure operation — she gave Penelope Blossom a knowing look before Penelope either had or faked a seizure to stop Veronica and Cheryl's inquisition.

The real big moment came at the very end of the episode — after Riverdale had been quarantined, Hiram raises a glass to the Gargoyle King, who is standing in his office. There have been some theories about how Hiram is the Gargoyle King, but this reveal shows that Hiram is working in cahoots with the Gargoyle King rather than actually putting on the boney mask himself.

Of course, this naturally makes the main Gargoyle King suspects any of Hiram's allies. Hermione Lodge has already launched some Gargoyle King rumors, and she has been working very closely with her husband this season despite decrying his methods at times in the past. Then there's Hiram's co-conspirators in building the Southside prison. Sheriff Minetta is dead and Penny Peabody was out of town (and possibly dead after what Gladys Jones put her through), so that leaves us with the Blossoms and Malachai.

The Gargoyle King suspects are finally starting to narrow down, so hopefully we will get the reveal soon after Riverdale returns from its winter hiatus on Jan. 16.

More like this
These Fake 'Riverdale' Brand Names Are Even Better Than The Real Thing
By Rachel Varina
When Will 'Riverdale' Season 5 Return In 2021? Its Mid-Season Break Is Long AF
By Rachel Varina
The 'This Is Us' Season 5, Episode 14 Promo Teases Another Beth Story
By Ani Bundel
Stay up to date