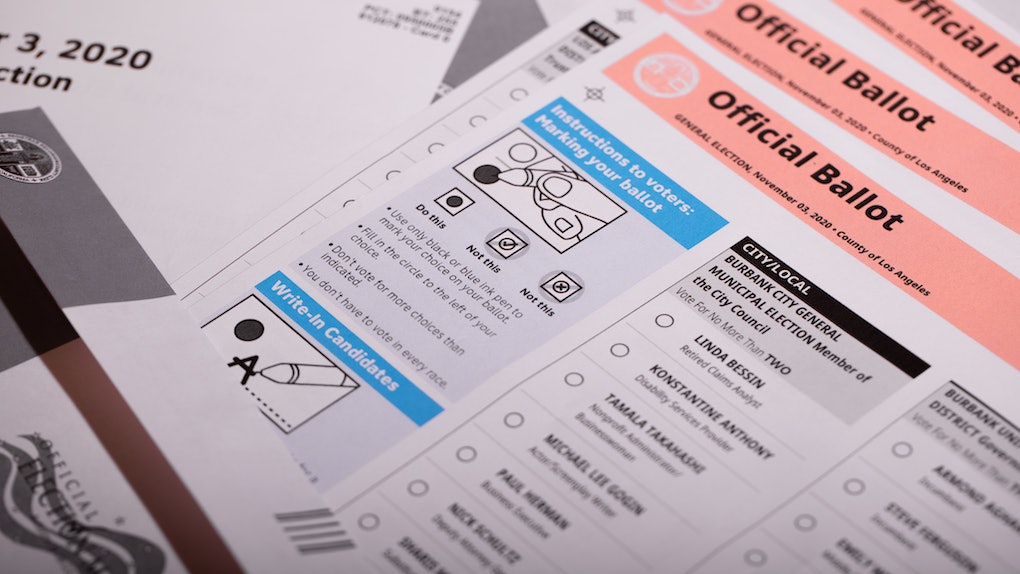 What Are Down Ballot Races? Here’s Why You Should Pay Attention

As the 2020 general election approaches, you likely know which presidential candidate you're voting for, but you may not be as familiar with the lower level races. When you go to vote during this election season, it’s important to keep in mind the impact of the other races you're voting in. If you need a refresher, here's what down ballot races are — and why they're so important.

“Down ballot” is the colloquial term for state, local, or even congressional races — the ones which appear further down on your actual ballot than, say, the presidential race. Merriam-Webster lists Senate and House seats, as well as those running for other state and local offices as down ballot positions, because "their outcomes are often influenced by the turnout for the presidential race at the top of the ballot." As you prepare to cast your ballot, here’s why you should make sure to pay attention to these lower level races and vote in them.

The nonpartisan organization I Am A Voter shared a snapshot on its Instagram account of what’s at stake in the upcoming election. On the ballot this November are 35 Senate seats, all 435 House seats, 11 gubernatorial seats, 10 state attorneys general, seven Secretaries of State, and 280 state supreme and appellate court seats. And that’s all in addition to any other local races in your city or county.

While the presidential races get a lot of attention, these down ballot races will actually have a lot more impact on your day to day life. State and local governments oversee things like police departments, school systems, public libraries, parking laws, and more of the systems you use in your everyday life. Meanwhile, officials such as state governors, the attorney general, and your city or county's mayor or city council members make policy on how your region handles big issues like LGBTQ+ rights, reproductive rights, public health policy, or law enforcement. If you want to see changes in your area, down ballot races are where to look.

President Barack Obama weighed in on the importance of down ballot races on Sept. 24 in a video with NowThis News. "You've heard a lot about the presidential race, maybe too much, but there is a lot more that will be on the ballot this fall — senators and representatives in Washington, state legislators, governors, [and] mayors," Obama said. "In this election, the state leaders we elect will help redraw electoral districts all across the country … that could mean a decade of fairly drawn districts where folks have an equal voice in their government, or it could mean a decade of unfair partisan gerrymandering," he continued.

State and local officials have the power to directly impact politics in your area. State senators and representatives in Congress affect legislation for all 50 states, while your state government takes on health care, wage rates, and other state laws. Both state and local governments enact laws and regulations that affect your area's economy, tax policy, environmental regulations, and more, and are also in charge of the allocation of resources, such as educational budgets.

While most people know who’s running for president, it might be a little harder to find out about local elections. But an easy way to discover what down ballot races you’ll get to vote on is to head over to Ballotpedia and look up a sample ballot. From there, you’ll see not only all the races that you’ll get to vote on but all the candidates running in each one — making it that much easier to research your options ahead of casting your vote.

Every vote counts, and remember, you get to cast yours in more than one race.