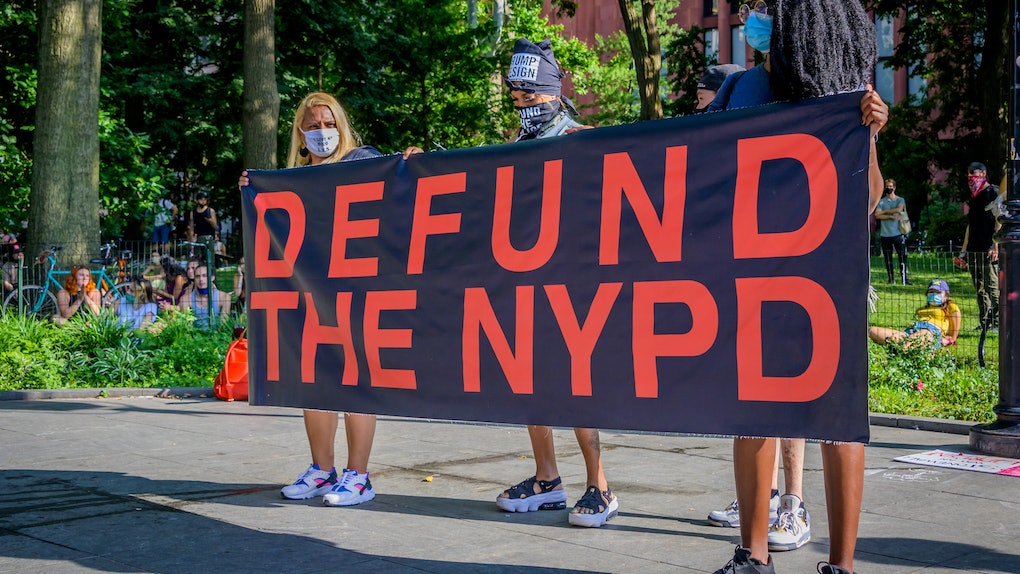 These Are The Local Elections Where You Can Vote For Police Accountability, So Pay Attention

As activists continue to take to the streets in protests against racist police brutality, they are also advocating for major changes to police departments, demanding everything from police accountability to defunding or abolishing the police. But these demands will likely be more effective if the officials who make the final calls are receptive, and in order to elect more supportive officials, you have to vote for them. The decisions about where to allocate budget resources and how to oversee police forces are typically in the hands of local officials, like your mayor or district attorneys — officials who are often elected. So if you want to demand justice for the Black people killed by police and you want to challenge existing systems of racism and discrimination, these are the local races you should pay attention to.

All across the country, activists have demanded justice for George Floyd, Breonna Taylor, Tony McDade, Elijah McClain, and many other Black people who have been killed by police — and at the local level, they have put pressure on city councils and other elected officials to invest in communities, rather than in policing. Calls to defund and ultimately abolish the police have been coupled with demands to invest in schools, health care, social work, and other resources, especially in disproportionately marginalized communities and neighborhoods.

In many areas, the political pressure activists have placed on local officials has gotten results. On June 12 — 18 days after Floyd was killed by Minneapolis police officers on May 25 — the Minneapolis City Council unanimously voted in favor of a plan to disband the city's police department and replace it with a community-led safety model, thereby highlighting the importance of local elections and the effectiveness of grassroots activism. If you want to take your activism to the ballot box as well as the streets, here are some of the races and elected positions you should be ready to vote on — whether you want to support specific changes to policing, complete overhauls of law enforcement, or the ultimate abolition of the prison industrial complex. Not all of these elected positions may be applicable to where you live, but even if they’re not, you can use this as a starting point to research what’s most effective for your area. Remember, there are all kinds of ways to enact lasting change.

In Minneapolis and many other cities, activists are specifically calling on city councils to take action, because city councils approve annual budgets, regulate public safety, pass local laws, and more. As a result, they often ultimately have the power to approve police budget cuts and funding reallocations. If you want to see your local police department defunded, or call for funds to be allocated to resources other than policing, calling and emailing your city council members — and meeting with them in person wherever possible — is an important way to make your voice heard.

Mayors are often the face of their city or town, which means they negotiate labor agreements, propose police budgets, and often appoint police chiefs. If you want to demand that your city defund and dismantle its police department, the mayor's office should be at the top of your list of officials to call — and high on your list of elections to follow. The city council has the final say on budgets, but mayors often put forth budget proposals, hiring suggestions, and more, making them the first step in changing policy.

If you do call your mayor or mayoral candidate, there are a few different demands you can make. You can urge them to propose a budget to the city council that includes significant cuts to your city’s policing budget. You could also lobby them to fire a police chief who hasn’t held their officers accountable for violent behavior or misconduct. Mayors generally hold office for two-year or four-year terms, depending on city or town regulations.

If your town or county has a sheriff’s office instead of or in addition to a police force, voting for change may be an even more direct for task. Unlike police chiefs, who are usually appointed by mayors, sheriffs are typically elected directly by their constituents. Depending on where they are, sheriffs' responsibilities vary: in some parts of the country, their offices are the primary sources of law enforcement; while in others, they may be in charge of running county jails or serving court papers. Although they are accountable to voters, sheriffs can nevertheless abuse their positions.

According to The Appeal, sheriffs have historically imposed dangerous jail conditions, supported federal deportation efforts, and violated people's civil liberties. If your community's main source of law is a local sheriff's office, your demands as a voter may go further if you call that office, because a mayor cannot fire a sheriff like they can a police chief. Sheriffs generally hold office for four-year terms.

You’ll also want to pay close attention to district attorneys and state attorneys general (AGs), who make decisions about charging officers accused of misconduct. Kentucky's attorney general, for example, said on June 18 that he had not concluded his investigation into Breonna Taylor’s death and that he would not be swayed by celebrities like Beyoncé calling for answers. His investigation was still ongoing as of July 2, despite widespread outrage and calls to charge the officers involved, who, more than three months after they killed Taylor, have not been charged with any crimes relating to her death.

District attorneys are responsible for prosecuting criminal cases in court and reviewing police arrest reports, among other duties, so they play a key role in police accountability. State AGs, meanwhile, represent state governments in legal proceedings, and cases like Floyd's often end up being passed up to state AGs. District attorneys and state AGs both typically hold office for four-year terms — except in Vermont, where the state’s AG serves two-year terms.

And remember, you don't have to wait for a public instance of police brutality or violence to happen in your area to call these officials and demand change in your town or city. You can proactively call on your mayor and city council to cut local police budgets, or demand that your sheriff's office hold itself accountable for violent actions.

Pushing officials to commit to change works: Minneapolis was not the only city in recent weeks to vote on changes to its police department. On June 11, the Austin City Council voted unanimously to reallocate some of the police department's budget to social services, and to ban police from using certain deadly practices. In Spokane, Washington, the city council unanimously voted on June 29 to shoot down a proposed labor agreement with the Spokane Police Guild, on the grounds that the contract did not sufficiently implement civilian oversight. And on June 30, the New York City Council voted to cut $1 billion from the city's $6 billion police budget, though activists have alleged that the cuts are little more than budgetary sleight of hand with no real impact.

Voting is not enough as a stand-alone action, because police unions have a lot of power and it's difficult — though far from impossible — to change entrenched systems. If you want to take more action, you can still get out and protest, support activists, and donate. However, if you help elect officials who are more sympathetic to defunding the police, it'll be easier for you and your fellow voters to put pressure on them once they're in office.

More like this
Biden's Quote About Police Reform At The 2021 Address To Congress Went Way Beyond Policing
By Rhyma Castillo
After Derek Chauvin's Conviction, Young Black Activists Demand True Justice
By Nylah Burton
Why Are Washington, DC & Puerto Rico Not States? There's A Lot To Unpack
By Rhyma Castillo
Stay up to date