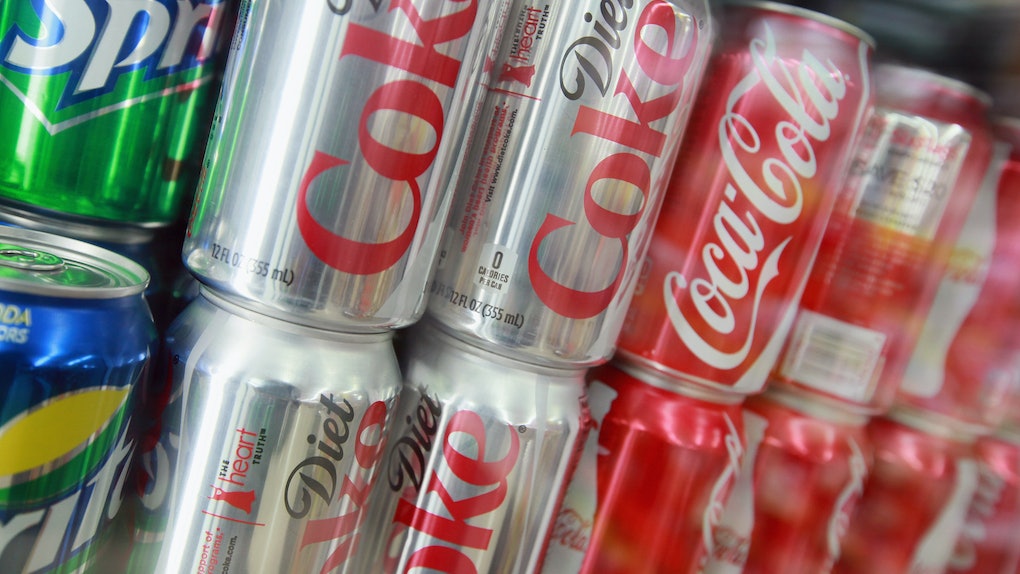 What Are Diet Coke's New Flavors? They're Fruity & The Cans Look So Different

Ah, Diet Coke. The fix for any and all midday slumps, the prize on your endless quests for chasers and mixers, and probably the reason why your mom was always so peppy when she picked you up from elementary school every day. But that beloved caffeine fix we've all come to know and love is getting a remix — and no, it's not another sad attempt at Coke Zero. On Jan. 10, Coca-Cola not only announced a new can design for its beloved zero-cal beverage, but also an array of new Diet Coke flavors that are fruity AF.

If you're anything like me and you just can't stand change, don't worry, because the original design and taste will still be available in its retro-as-heck glass bottles and those plain 12-ounce cans. However, the new generation cans are a little taller and skinnier. Still containing 12 ounces of soda, the new cans have a vertical strip along the side in a color that's based on the flavor. In a press release, James Sommerville, the vice president of Coca-Cola Global Design, explained that the modernized design keeps up with consumers while still maintaining the company's original branding. He said,

For a design team, the opportunity to rethink such an iconic brand with the scale and reach of Diet Coke — to build on its heritage and create a visual language that will help write its next chapter — is a rare brief, This visual evolution elevates the brand to a more contemporary space, while still using at its foundation the recognizable core brand visual assets.

In terms of flavor deets, Coca-Cola revealed in its press release that it spoke to more than 10,000 people nationwide for flavor and packaging ideas. After testing more than 30 Diet Coke flavor combos, it ultimately decided on four distinct (and darn amazing) flavors, which received the most positive feedback. The flavors are super original and different from anything we've yet to try in Diet Coke history, and I'm just hella excited for a little tropical taste in my caffeine supply.

First up is Ginger Lime, it's and gonna be zesty AF.

This is bound to taste like pure summer. We're guessing that it'll probably go really freaking well with vodka, but what do we know? Anyway, there's no doubt that it'll be making a debut at our next house party.

Next is the Feisty Cherry flavor, winning dessert-loving hearts everywhere.

This literally sounds like pie in a can. And honestly, cherry is always the best flavor for everything, so there's no way this won't be good. For a midday pick-me-up (or for our next post-breakfast, lunch, and dinner dessert), Feisty Cherry will be there for us.

Zesty Blood Orange is going to be my new favorite morning wake-up call.

We never thought orange would make its way into a Coke can, but we're honestly not mad about it. This could actually be the best coffee replacement next time the Keurig breaks, and it seriously sounds like an ideal start to any morning.

Twisted Mango: a taste of paradise?

Next time you're craving fresh fruit and a swim in the ocean, Twisted Mango will have your back with a relaxing taste of the beach. It may be absolutely freezing outside, but a little refreshing taste of mango is all I need.

The press release continues to say that these new flavors, along with the OG Diet Coke flavor in its new packaging, are emerging this month on a rolling basis. They will be sold in individual cans, as well as in packs of eight.

So whether you're a Diet Coke fanatic or if you're merely a once-a-month diet drinker, the new packaging is undeniably sleek AF, while the new fruity flavors are expected to be unique and darn tasty.