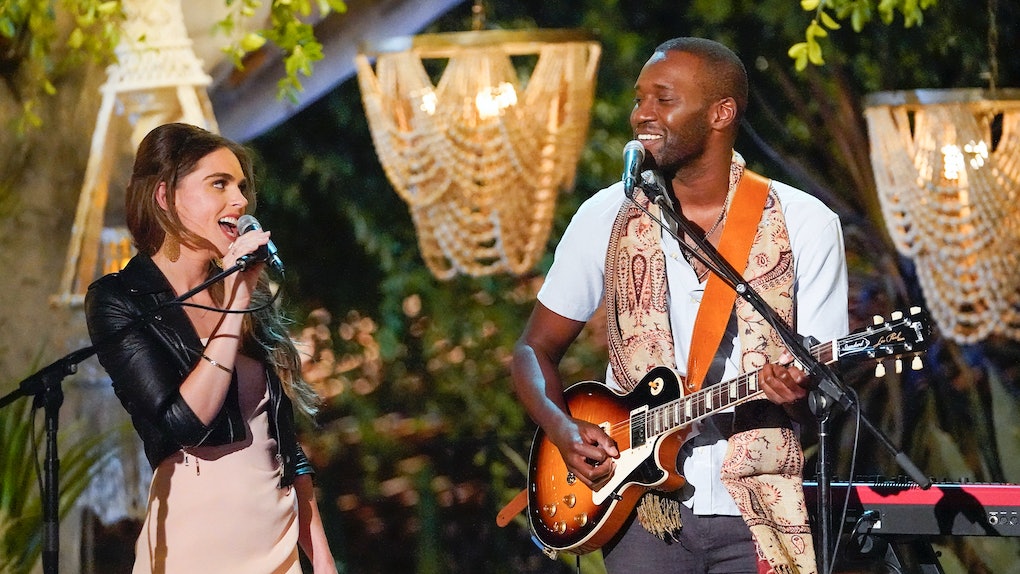 What Are Chris & Bri Doing After 'Bachelor: Listen To Your Heart'? Here's An Update

Despite all the drama in The Bachelor franchise, one of the best parts of the show is watching two people fall in love... and stay in love. But before fans could learn about the fate of Clare and Dale in The Bachelorette's Nov. 5 episode, they got a glimpse of another successful Bachelor couple. If you're wondering what Chris and Bri are doing after The Bachelor Presents: Listen To Your Heart, here's the breakdown of what the singing couple has been up to since the spin-off series came to a close.

First, for anyone who needs a quick refresher, Chris Watson and Bri Stauss were the winners of the first (and so far only) season of The Bachelor Presents: Listen To Your Heart. The premise of the show was basically this: Put a whole bunch of musically inclined singles together in a mansion, send them on dates, let them fall for the wrong people and get tied up in all sorts of drama, and see what happens. Along the way the contestants also honed their skills and put on performances each week — and in the end, a few of them even found some impactful relationships.

From the start, it was clear Chris and Bri were endgame. Not only did they have approximately zero drama or other romantic interests, but also, their vocals and their chemistry were out of this world. It makes sense that come finale time, they won the overall competition.

After winning LTYH in May, the couple appears to still be going strong both musically and romantically. They post about each other on their social accounts all the time. Oh, and speaking of social accounts — yes, they have a joint Instagram account dedicated to their music, on which they post performances, adorable photos, and IG lives. As recently as Oct. 4, they posted a video of themselves kissing, so it's pretty obvious the couple is still together and in lurve. Though they didn't leave the show engaged, they told Elite Daily back in May that it was definitely something they talk about. For now they've been taking things "slow but serious."

While their grand-prize for winning LTYH — which included going on tour together — was put on hiatus due to the coronavirus pandemic, Chris Harrison told Entertainment Tonight in May it was still going to happen... eventually. "Obviously when we made that prize package, getting out and touring and concerts were a thing," he said. "I mean, clearly that is still part of it. As soon as they can do it safely, we'll do that."

In the meantime, Chris and Bri haven't been waisting any time. They're still creating music, selling merch, and building a solid social presence. While it might be a while until fans get to see them perform IRL, watching them serenade yet another "made for each other" Bachelor Nation couple sure does scratch that romantic itch. Fingers crossed Clare and Dale's relationship continues as harmoniously as Chris and Bri's seems to be.