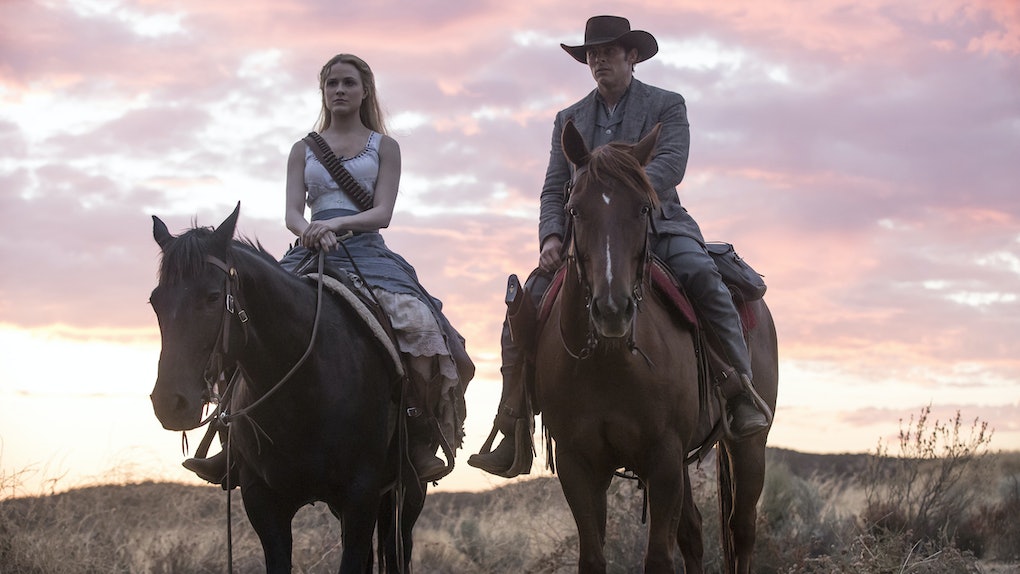 'Westworld' Season 3 Is Officially Happening, So Let The Theorizing Begin

Fans of the Delos corporation, rejoice. Though it was probably a given considering that the ratings were steady from last season, Westworld has been given another season. (Westworld doesn't bring in Game of Thrones level numbers, but nobody does.) That means no matter what wild shenanigans go down in the season finale in a few weeks, viewers can rest assured HBO will return to the park that Robert Ford built. But if Westworld Season 3 is officially happening, what does that mean for those who are theorizing about the park demise?

It's natural to theorize about the park's demise, especially with scenes like the end of Season 2's premiere, showing scores of hosts floating in a flood zone in an area of the park most had never seen before, and Bernard didn't know existed. There are some who fall into the camp that the end of Season 2 is being foretold by the new credit intro sequence, and the finale will see hosts able to give birth. Others believe the second season is following the plot of Futureworld, and that Delos is populating the earth with sleeper hosts to do their bidding. But whatever your favorite theory this season, it's going to need to be altered to fit another 10 episodes beyond this year.

Bloys is very pleased with how the show is progressing and praised Westworld's showrunners, Jonathan Nolan and Lisa Joy:

It’s been an extraordinary pleasure to work with the exceptionally talented Jonathan Nolan and Lisa Joy, as well as their gifted cast and crew.From the inspired storytelling to the incredible visuals, we are so excited to see where the next chapter will take us.

As Variety notes, though the live same day ratings of Westworld last season didn't initially look impressive, it's tally across all HBO's different platforms rose steadily. Nielsen rating averaged it at 1.822 million viewers over the season, but when HBO added in viewers from HBO Go, HBO Now, plus DVR delayed viewings, the average jumped to 13.2 million viewers, which is as close to Game of Thrones level numbers as any of HBO's show get. Season 2 has already followed suit, with numbers in the live demo slightly higher so far, and the across platforms final tallies looking better than ever.

The show was also an Emmys darling last year, despite having aired in the early Oct.-Dec. slot in 2016, scoring 22 nominations. With the series now in prime Emmy nominations airing position (the season finale will air only hours before the final day of Emmy voting) HBO is clearly seeing the potential for the series to step up into Game of Thrones shoes.

The real question is how long will the show take between Season 2 and 3. The series spent nearly 18 months between the airing of Season 1 and Season 2, though not all of that was their fault. Some of it was due to script rewrites, and editing, which falls at the feet of the production. But there were also the California wildfires which created delays in filming, as well as mudslides. Furthermore, HBO then decided to hold the premiere of the season to the April slot in order to maximize their Emmy chances.

With Nolan and Joy now having their feet under them in making the series, and HBO probably eager to keep it in the later part of the TV season, chances are the wait between this season and the next won't be quite as long. But fans will just have to wait and see.

More like this
These Tweets About Regé-Jean Page Leaving 'Bridgerton' Are Royal Bummers
By Cianna Garrison
When Will 'Riverdale' Season 5 Return In 2021? Its Mid-Season Break Is Long AF
By Rachel Varina
Katie Thurston's 'Bachelorette' Season 17: Cast, Premiere Date, & More Info
By Abby Monteil
Stay up to date