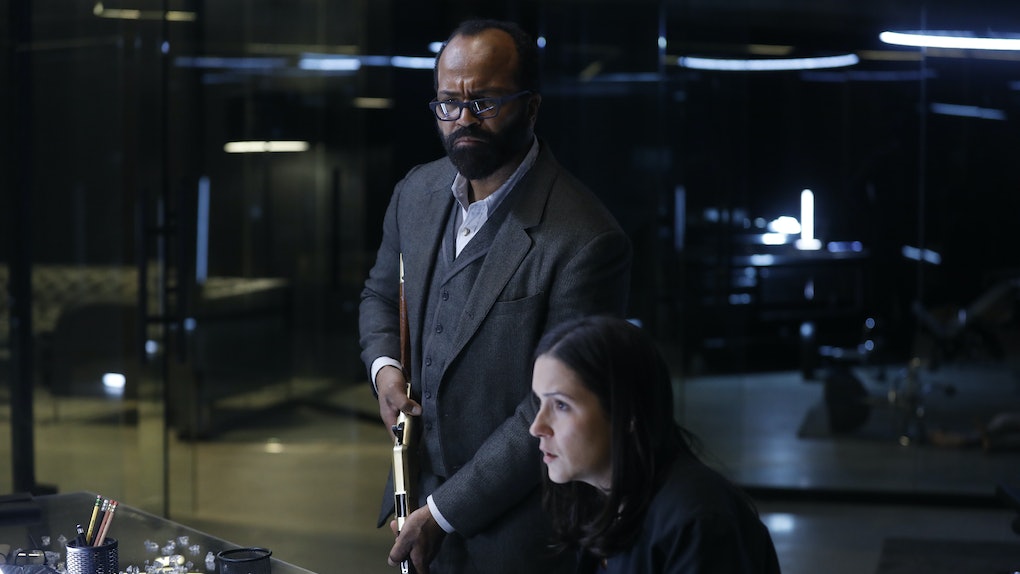 Westworld Season 1 ended with one of the biggest twists since Ned Stark was beheaded in Game of Thrones: Anthony Hopkins' character, Robert Ford was shot in the back of the head and killed. Hopkins was the biggest name on the show, and his character, Ford controlled every aspect of the parks. Viewers couldn't believe he was gone, theorizing during the offseason the Ford viewers saw shot was a host. Perhaps there were Ford hosts waiting in the wings. Instead, Ford hid in a far more sensible place. Westworld just showed fans where Robert Ford is, and he's still controlling things from deep inside the Delos program.

Two weeks ago, in episode four, "The Riddle of the Sphinx," Bernard and Elsie discovered one of the "Infinity Symbol" labs contained a whole new project Delos hid inside the park: The ability to clone a real person. This was Elsie's first time in this heretofore unknown series of labs. But Bernard kept flashing back to another time he had been there, when he had come away with a mysterious "red marble"-like object.

This week, Westworld revealed those "red marbles" are the program chip which holds the personality of the host in those little "brain muffins" in their heads. (Fans have also taken to calling them "brain cupcakes.") It turns out the red marble Bernard made was Ford's brain.

But unlike James Delos, who was having his program inserted into a host clone of himself (a "Delhost," if you will), Ford apparently isn't interested in wandering about inside a host body. (This may have to do with the host bodies rejecting the brain muffins of real people.) Instead, he had Bernard insert him into the virtual reality server where all of the park's hosts and narratives are beta-tested before release: The Cradle (CR4-DL.) He is the ghost in the machine.

This is how Ford has been controlling the park and speaking to William as he continues on his game to "find the door." It is also why QA has failed to take back control of the park from the servers. Ford is inside the program, fighting back at every step, buying the host rebellion time from the inside.

It suggests Ford knew from the beginning, far before the end of Season 1, his "new narrative" would be a hard-fought battle, and his hosts would need every advantage he could give them. It also suggests he learned lessons from Arnold's attempt to free the hosts back before the park opened, and took them into consideration.

Arnold thought that by having the hosts all kill themselves (and him), Ford would not be able to resurrect the project and go on singlehandedly. Obviously, Ford must have used the Cradle as part of the process to resurrect the hosts, so he wanted to take it out of the equation. Moreover, in his version of "taking back the park," he's having his hosts attack and kill the humans. This means any program which could be used against them in "the Mesa" labs also need to be prevented from deploying, so Ford is constantly locking everyone out. He's their man on the inside.

What does this mean going forward? For one thing, Bernard's outfit inside the Cradle is instructive: It's the outfit he's wearing on the beach in the "two weeks later" timeline. This all but confirms the theory all the scenes with Karl Strand are actually a VR simulation inside the Cradle, trying to get some sort of information out of Bernard. Perhaps they are looking for Ford?

This also feeds into the theory Dolores isn't actually under her own control, but instead is still following Ford's programming. Now viewers know Ford is inside the code, controlling the player piano while helping the fight along, it seems more likely the revolution Dolores is leading is one of his making and not her own.