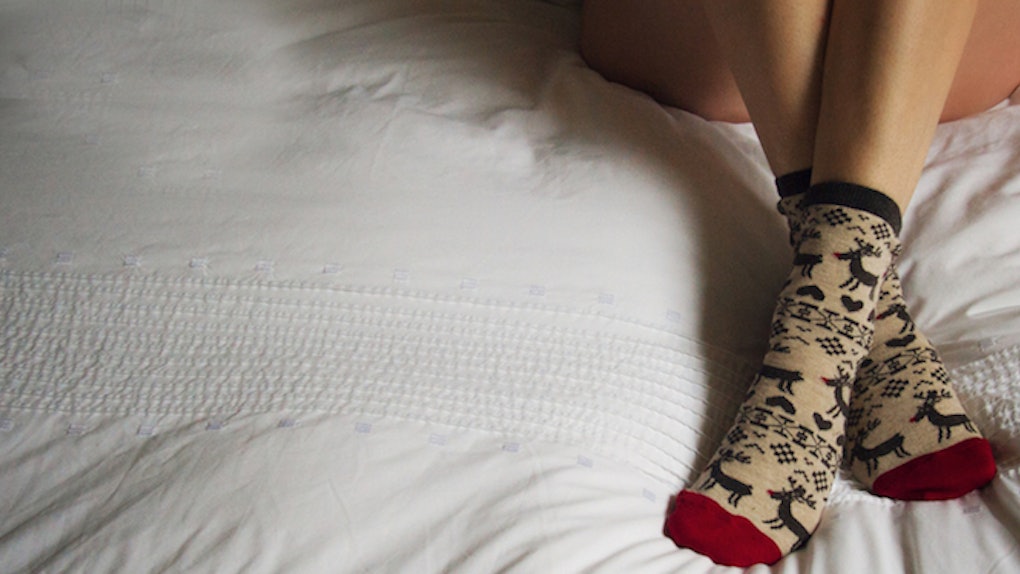 Wearing Socks During Sex Is Majorly Controversial & People Explain Why

Apparently, there's a deep divide when it comes to wearing socks during sex. Some people are hardcore #TeamSocks, while others are adamantly against it. There's a few who are in-between for the issue, but generally, this topic is pretty polarizing.

Pros to keeping them on include warmth, avoiding any unpleasant smells, hiding any potentially unruly toenails (it happens), and appealing to your partner (sock fetishes are thing!). Also, one study found that women who wear socks during sex are more likely to orgasm.

Cons include socks looking kind of unsexy, distracting from ~the mood~, and slipping off halfway through doing the deed.

When I investigated which opinion is more popular, I found that people are actually pretty passionate about this topic. Each side definitely thinks theirs is the right one (of course). While there are many threads on Reddit that debate this at length, here are a few summed-up reasons for the big sock-during-sex debate. Here's what they all had to say – arguments for pro-socks, anti-socks, and in between all ahead.

Socks shield you and your partner from cold feet.

"I was actually hooking up with my friend and his feet were super cold (because he wasn't wearing socks) and it would really bother me when I could feel that," Jenny, 21, tells Elite Daily. She prefers wearing socks when having sex to keep her feet warm and to prevent her feet from touching the sheets. "I need to be as comfortable as possible in order to be able to focus on enjoying sex."

But socks can have a distracting texture.

Marie*, 24, doesn't like it when she's having sex with someone who's wearing socks that have a rough texture, are pilled, or really old. “I say 'No, take those off first, this isn’t gonna go any further,’ if the socks are rough,” to her long-term boyfriend. She doesn't pay attention or care about him wearing socks that don't feel uncomfortable against her skin.

Jenny, who prefers wearing socks during sex, doesn't necessarily think the added layer helps her orgasm. "I do know that they're supposed to help and while I don't think I've noticed a difference, there could be a little mental thing going on there because I know it's supposed to help, like a placebo," she says.

"[A] man who is naked except for his socks is not a very sexy sight," Reddit user bombthedisco said. "Plain and simple. I don't care who the man is. Even Chris Hemsworth would look silly in just socks."

And it's not just that wearing socks is unsexy – taking them off can be seen so, too.

"Because the act of taking off a sock as a guy just can't be sexy," said Reddit user Andrew_Reynolds. "If you are laying down you have to curl up and stick your *ss in the air like it's yoga time."

Another user, TheRedRoderick, said wearing socks during sex is "just plain silly and not a turn on."

Some people have a sock fetish, liking knee- or thigh- socks on their partner. Various users on Reddit claimed they love when their partner wears socks to bed, so sometimes it can add to the sex appeal of someone rather than detract.

So whether you're on the sock train, or will legit stop anything from happening until your partner takes off every single item of clothing, remember it's all in good fun, so don't be (too) mean, and enjoy.