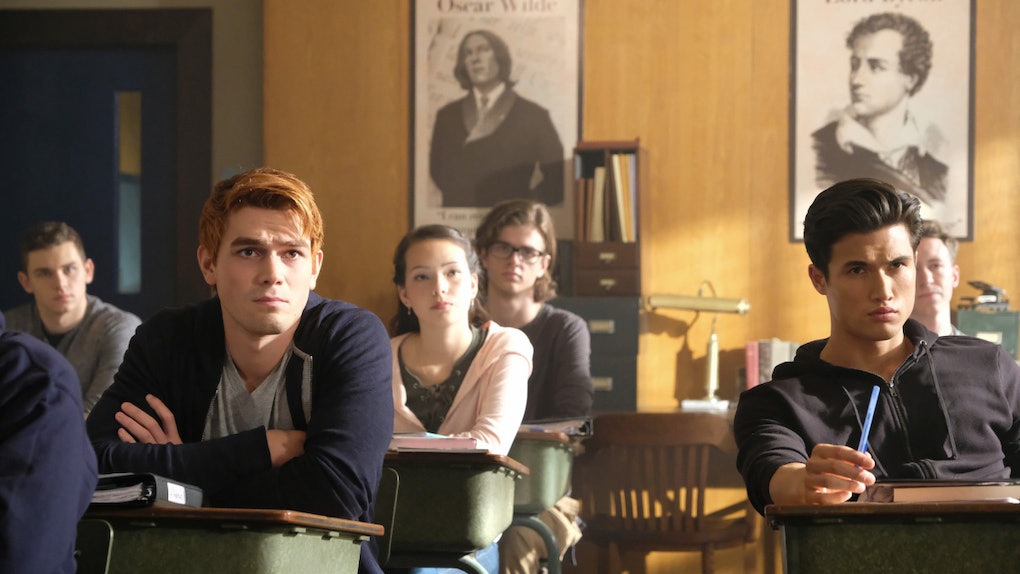 Was Moose Shot On 'Riverdale'? The Jock Was The Second Murder Victim In Season 2

The season premiere of Riverdale was all about the survival of Fred Andrews. Archie's father struggled for life all through the hour long episode, only to open his eyes at the very end. Since then, Archie has been on the war path to keep his father safe. But as the string of murders in and around the area grows, it's starting to become clear that Fred's shooting was just one piece of the puzzle, as Miss Grundy's death comes to light. And now another death may be on the horizon. Was Moose shot on Riverdale? And how will this fit into the larger picture of what I'm starting to call "The Archie Murders"?

Let's review how badly Archie reacted to hearing about the death of Miss Grundy first. His mind instantly jumped to this being a string of attempted and successful murders aimed at him. Now, to be fair, Archie hasn't exactly been sleeping. he desperately needs therapy. Instead, Reggie is bringing him uppers and telling him not to bring a baseball bat to a gun fight, which is not exactly helping where his head is at.

But the moment they say she was strangled with the cello bow, Archie immediately flashes back to giving that bow to her as a gift, and we can see the pieces clicking in his mind, even as he insists no one will believe him, and maybe he's making it all up in his mind. He runs to the sheriff, thinking the murderer was her abusive ex-husband.

But his theory was wrong, the ex didn't do it. He's got an alibi. Archie starts to let it go. It seemed like things were calming down. The episode came to a close, including a feel good night at Pop's to keep the store open. (Well, sort of. As feel good as Riverdale ever gets anyway.)

Archie even starts to give up on the uppers. He insists the gun he's buying is just for "protection."

And then... Moose got shot.

In the drivers side of the car, with Midge next to him, right after they got seriously high on Jingle Jangle and started making out.

So let's talk about Moose, who has been both tormentor and friend to Archie on and off throughout Season 1.

Moose was the one who found Jason's body, as we might remember, during a skinny-dipping swim with Kevin from school. Despite this twist that Moose, the biggest jock in the series, is gay, the show quickly backtracked (or perhaps the character did) having him date several girls before ending up with Midge, as he is in the comic books.

Unlike Miss Grundy, where there is a clear Archie connection from Season 1, and a good argument to be made that someone might be targeting Archie, Moose's connections are less obvious. As we might remember, Moose actually is seen bullying Archie in the early episodes of the series, including heckling him the first time he gets on stage to perform.

But by the end of the season, things are better between them. Moose turns up at Jughead's birthday party carrying the kegs. Archie, Reggie, Moose, and the rest all seem to be pretty cool hanging out together. Moose even enjoys working for Fred Andrews' construction company, even if he accidentally gets beaten up for it by being in the wrong place at the wrong time. In the season premiere, Moose (and Midge) were both at the hospital waiting for news of Fred.

So why Moose? Why now? Could the Angel of Death be targeting him as a sinner? Is this something to do with his closeted behavior last season and the unfulfilled relationship with Kevin?

Or could this somehow tie back to Archie after all? So many questions, and such a long wait until next week.