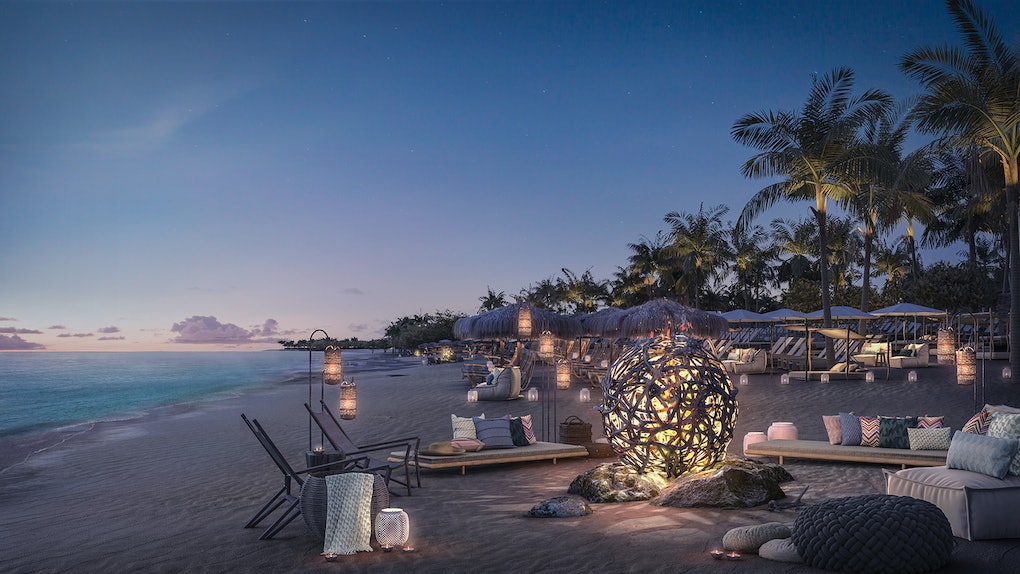 If you're currently thinking about your 2020 vacation (I'm right there with you), then I have great news. A brand new cruise ship will be setting sail next year that'll inspire you to book your trip and pack your bags. The boat I'm referring to isn't your typical on-the-water getaway, though. Instead, Virgin Voyages' adults-only cruise ship features festival-like onboard entertainment, a freaking tattoo parlor on deck, complimentary meals, and so much more. TBH, it's a tropical dream vacay for anyone who's over 18 years old — so if you're interested, read on for details about the voyage.

Let's take it from the top. While you were partaking in Valentine's Day festivities on Feb. 14, Virgin Voyages announced its first cruise ship ever. The ship, called Scarlet Lady, is the adults-only hub that's jam-packed with everything you'd ever want from a vacation (I'll get to those details in just a moment). According to a Virgin Voyages press release, the news was unveiled by Virgin Voyages' President and CEO, Tom McAlpin, and Virgin Group Founder Sir Richard Branson. Branson spoke about the cruise ship, and said,

I’ve dreamed of starting my own cruise line since I was in my 20’s, and now the launch is finally getting close. We have taken the time to think about every detail and craft an experience that brings the Virgin brand to life and disrupts the travel industry.

So, how would the Scarlet Lady "disrupt" the travel industry? The answer is simple: with tons and tons and tons of on-board activities that'll blow any other vacation out of the water (no pun intended). As I previously mentioned, there will be a tattoo parlor on the ship as well as multiple bars, lounges, "Vitamin Sea" spa and fitness areas, entertainment, and more.

Speaking of entertainment, get this: During each voyage, the cruise ship will make a day stop at a beach club in the Bahamas called The Beach Club at Bimini. There, sailors will have the opportunity to partake in beach yoga and meditation followed by hours of fun in the sun. According to the Virgin Voyages, different DJs will occasionally lead the parties with their tunes — and Mark Ronson is one of them. Yes, the Mark Ronson. In case you're unaware, he's the Grammy Award-winning musician who's collaborated with major stars like Lady Gaga and Miley Cyrus in the past.

Apparently, he'll be performing at The Beach Club at Bimini four times in 2020 — but those dates haven't been announced yet.

Now that you know about what kind of entertainment the trip has to offer, you're probably wondering what kind of food is included. According to Virgin Voyages, sailors will get to choose from over 20 onboard restaurants at no additional cost. Based off of the list of restaurants included, I have a feeling that anyone on the ship will be sailing on a full stomach.

If you're hoping to board the Scarlet Lady next year, you can go ahead and book your trip now. The scheduled voyages will take place between April 1, 2020 and Oct. 21, 2020, which gives you just enough time to save up and prepare for the vacay of a lifetime.