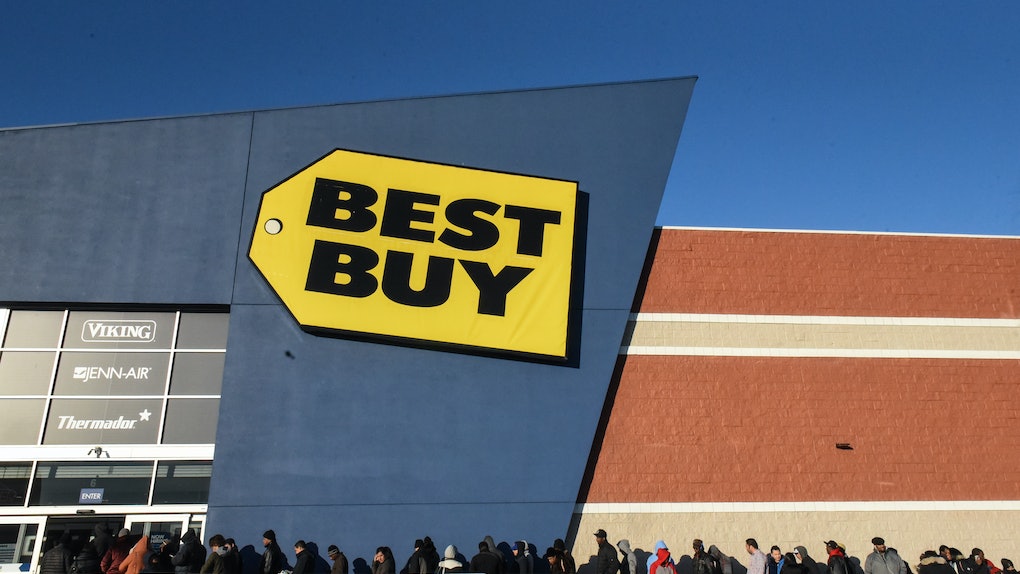 Videos Of Black Friday Shopping Will Make You So, So Grateful For Cyber Monday

It's never a good sign when a video from a news website begins with a warning for inappropriate content. It's even worse when that video is of shoppers braving stores after Thanksgiving. The mayhem known as Black Friday never ceases to amaze, and these videos of Black Friday shopping will fill you with gratitude for the innovation of online shopping.

Lots of people still go 100 percent bananas for Black Friday shopping. And it's not just fun and games: The website BlackFridayDeathCount.com, which keeps a running tally on injuries and fatalities related to the shopping holiday, has counted two injuries so far this year. And, sadly, that's a number to be thankful for, compared with the casualties of years past. At least this year there haven't been any life-threatening stampedes (yet).

Long gone are the days when you couldn't start your shopping until 6 a.m. on Friday, or even at midnight the day of Thanksgiving. The hours have crept earlier and earlier, with stores like Best Buy open at 5 p.m. on Thursday, and Kmart open at 6 a.m. on turkey day itself, according to CNN. On Thursday and Friday, people were taking advantage of the early openings and eye-popping deals, and among other things, actual fights ensued.

This video proves just how much of a hot mess the consumeristic holiday still is. A full-on fight broke out in Riverchase Galleria shopping center in Alabama just before midnight on Thanksgiving Day.

Aerial footage from a mall in King of Prussia, PA shows cars packed into the parking lot. One YouTube user filmed his Wal-Mart trip, showing lines wrapping through the store.

I'm not sure what qualifies as the technical definition of a stampede, but this video that appears to have been filmed in South Africa shows something pretty close to it.

But videos from elsewhere reminded the world that things don't have to be like this. There is a way to achieve shopping peace. One store's opening in the U.K. was inarguably more civilized. (Seriously, this person looks almost apologetic for his presence.)

For as much hype as in-person deals get, the annual feeding frenzy that marks the start of the December holiday season is going through a period of change. Black Friday shopping is now seeing a huge growth in online shopping. Normally, online shopping has been designated for Cyber Monday, the Monday following Thanksgiving, for those who want the deals without the lines. But now, it appears that Cyber Monday's irresistible convenience is starting to edge into the Black Friday crowd.

"Don't think I have the patience to do this Black Friday shopping with my family," wrote singer Jacob Whitesides on Twitter. And you can't blame him. Why wouldn't we all just shop online if it meant avoiding such horror shows?

As Fortune reports, some Black Friday goers this year were merely window shopping, checking out products that they could go online later and order at a discount. Brick-and-mortar stores have steep competition with online giants like Amazon, plus an increasing number of retailers who now offer Black Friday deals well before turkey day. Online orders account for two-thirds of the holiday shopping season revenue, Adobe Analytics says. Retailers like Walmart and Target have caught on and begun promoting online shopping more heavily, offering online discounts hours before doors opened to shoppers.

While there was a line for sneakers in Los Angeles on Friday morning, in Dallas, as the New York Times reported, crowds were almost nonexistent. According to data from the National Retail Federation, 164 million people — 69 percent of Americans — plan to or consider shopping during the Thanksgiving weekend, and 78 million people are expected to shop on Cyber Monday.

According to Adobe Analytics, online shopping for Black Friday rose 18 percent over last year, with more shoppers expected to hit the web than the stores. As of 10 a.m. ET on Friday, American shoppers had already dropped $640 million online this day alone. And up until 5 p.m. on Thursday (Thanksgiving Day), shoppers during the month of November had racked up $1.52 billion in spending, up 16 percent.

Even the official Trump online store is taking advantage of cyber deals for Black Friday, offering 30 percent off its Make America Great Again merchandise to fundraise for the president's 2020 bid. (The campaign has raised $14 million since September, according to Bloomberg.)

Hopefully, online shoppers fared much better than the folks in Alabama. If there's one thing expert shoppers might be especially grateful for, it's having Cyber Monday deals start early and getting to avoid the fightfights and stampedes altogether.