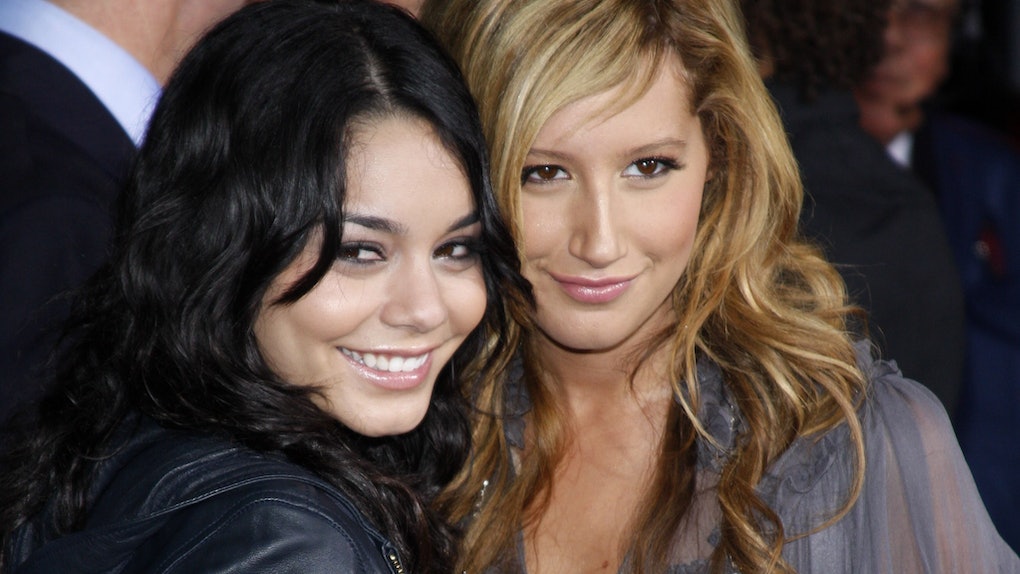 High School Musical fans can rejoice because Ashley Tisdale and Vanessa Hudgens have officially reunited! On Wednesday, March 3, Tisdale shared a picture of the two hanging out after not seeing each other for months due to the coronavirus pandemic. If you loved HSM growing up (and still can't get enough of it now), Vanessa Hudgens and Ashley Tisdale's Instagram reunion will put you in your feelings knowing they're still close.

Hudgens and Tisdale have been friends since they starred in the first HSM film in 2006. After working on two more movies of the hit Disney Channel franchise, they became inseparable. Through the years, they've attended each other's birthday parties, celebrated Halloween together, and in 2014, Hudgens was even one of Tisdale's bridesmaids at her wedding to Christopher French. Although the pandemic has kept them physically apart, the pair have kept in touch by making HSM-inspired TikToks together and virtually appearing alongside each other during the Disney Family Singalong special in April 2020.

Now, after all this time, Hudgens and Tisdale have finally seen each other again in person. "It's taken 9 months but safely we got a picture before my girl left again. Love you @vanessahudgens ❤️❤️," Tisdale captioned the photo, which showed the two embracing while wearing masks. Hudgens responded by commenting, "I LOVE YOU SOOOOO MUUUCCCCH."

Check out their reunion photo below.

If that's not the cutest thing you've seen today, then I don't know what is. This reunion was long overdue. Their last one was to celebrate Tisdale's 35th birthday on July 2, 2020. Hudgens posted a series of throwback pictures of them together throughout the years for the big occasion. "HAPPY BIRTHDAY TO MY OG BESTIE @ashleytisdale 🥳🥳 ash and I started from the bottom now we here!!!" Hudgens wrote at the time. "We met on a commercial audition and our friendship took off... Now in our adulthood we busy helping each other decorate and renovate our houses."

That October, the Merry Happy Whatever star also gushed on IG about how much she wanted to see Hudgens again. "Missing my Halloween Queen 👑 @vanessahudgens," Tisdale wrote, alongside an old photo of them spending Halloween together.

It seems the wait to see each other was definitely worth it!

More like this
Do The BTS Members Have Personal Instagrams? Here's What Baby ARMYs Need To Know
By Michele Mendez
Here's Why Meghan Markle Reportedly Isn't Attending Prince Philip's Funeral
By Cianna Garrison
The 'Glee' Cast's Tribute To Naya Rivera At The 2021 GLAAD Media Awards Was So Moving
By Abby Monteil
Stay up to date