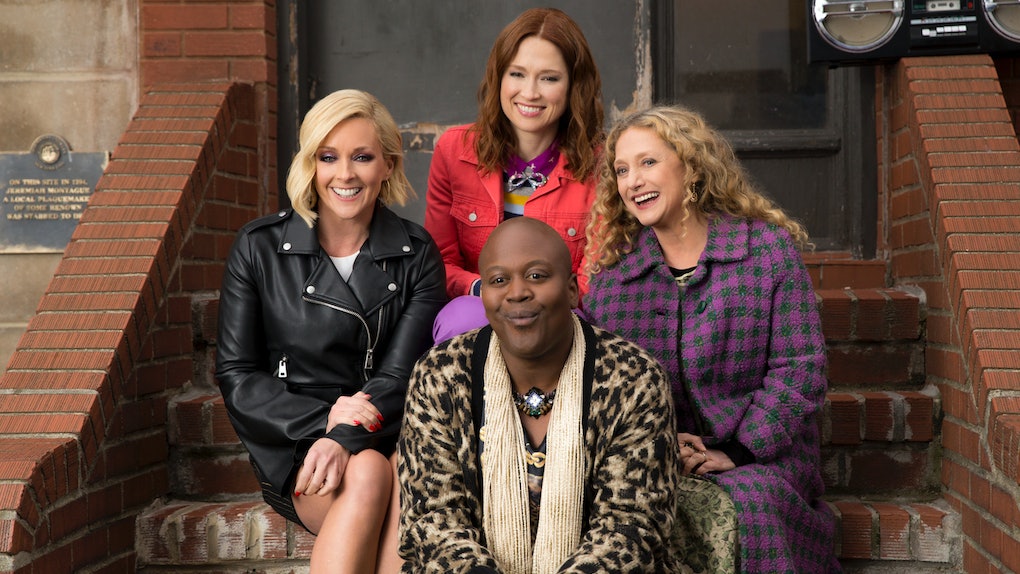 An 'Unbreakable Kimmy Schmidt' Movie Is "Definitely A Possibility," According To Tina Fey

It may not be the end of Kimmy Schmidt's story just yet. Although the fourth and final season of Unbreakable Kimmy Schmidt is currently streaming on Netflix, there is actually still hope that fans may get one more installment of the zany comedy series. There have been talks of a potential wrap-up movie for the series for a while now, and now that the show's finale has aired, co-creator Tina Fey is keeping fans' hopes high that an Unbreakable Kimmy Schmidt movie is a possibility.

Last summer, back when the fourth season of Unbreakable Kimmy Schmidt was revealed to be the show's final season, there were also reports that co-creators Tina Fey and Robert Carlock were in discussions with Netflix over a potential movie. Now that the series is officially over, the two showrunners have revealed that those movie discussions are still going strong.

In a new interview with The Hollywood Reporter, the showrunners reveal that Netflix has asked them to be coy about the potential Kimmy Schmidt movie, but Tina Fey confirmed that the movie "is definitely a possibility" still. Robert Carlock's response was even more promising, teasing fans to look out for the movie announcement soon: "We believe there are more stories to tell, and hopefully there will be an announcement about that soon."

The show's stars Ellie Kemper and Tituss Burgess also commented on the potential movie. Kemper noted that the movie was still not a definite thing, but said she hopes it will happen. Burgess said he trusts Tina Fey and Robert Carlock implicitly if they are indeed working on a movie, also noting that the characters would need to be in completely new places emotionally and in new circumstances to warrant a movie.

Going along with Tituss Burgess' statement, Tina Fey assured fans that the Unbreakable Kimmy Schmidt movie would be "a freestanding thing" if it happens, suggesting that its plot will more or less be divorced from the Netflix series. That makes sense considering the show's series finale (spoiler alert) concluded with a four-year time jump into the future, revealing what Kimmy, Titus, Jacqueline, and Lillian were up to in the year 2023. The time jump showed that Kimmy had opened an amusement park ride based on her book The Legends of Greemulax, Jacqueline had finally found love with Zachary Quinto's new character Eli, and Titus and Mikey were married with children. The "freestanding" potential movie likely will not have to get caught up in the time complications of this flash-forward, and would deal with a completely new story for the show's characters to deal with. Of course, the movie would also be tasked with providing a second farewell to the franchise.

Unfortunately, we do not have any official announcement of an Unbreakable Kimmy Schmidt movie yet, but it sure sounds promising, and Robert Carlock's statement should give fans hope that Netflix may make an announcement pretty soon. Until then, fans can finish the final six episodes of Unbreakable Kimmy Schmidt, which just dropped on Netflix last week.

More like this
Is Netflix Making A 'To All The Boys' Spinoff Series About Kitty? Here's The Tea
By Rachel Varina
6 ‘Schitt’s Creek' Spinoff Ideas That Are Simply The Best
By Rachel Varina
'Selena: The Series' Part 2: Netflix Release Date, Trailer, Cast, & More News
By Dylan Kickham
Stay up to date