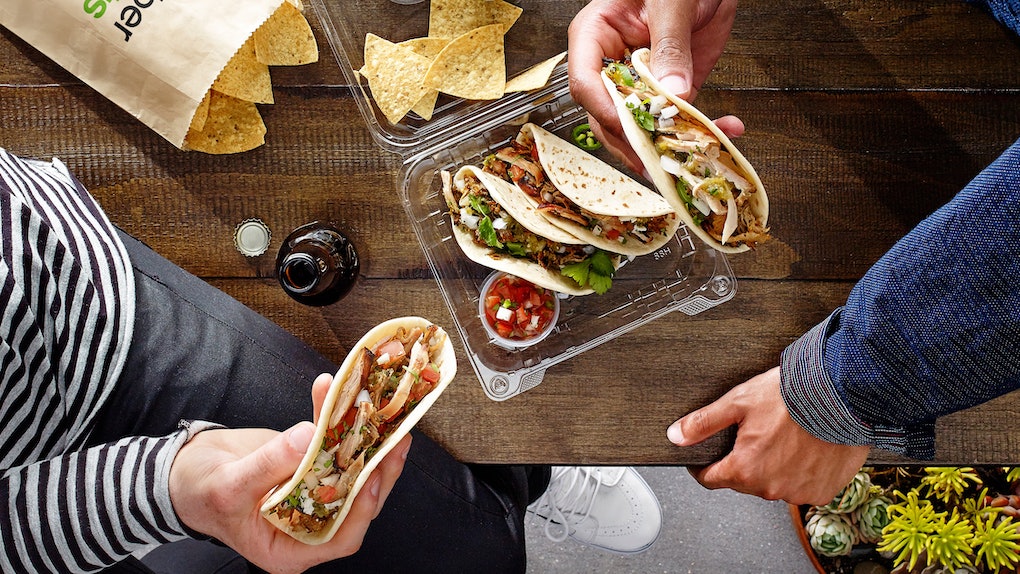 First came the Screen Actors Guild Awards, and then came the Grammys. Next in the lineup is the highly anticipated Academy Awards ceremony, and while you may be planning on watching them alone in your bed with an impressively hefty pint (because same), many movie buffs and entertainment kweens out there will most likely be hosting Oscar viewing parties. And if you happen to be one of those ambitious and outgoing people, Uber Eats' Oscars 2019 deal is a BOGO offer that you definitely will not want to miss.

If you've ever watched the Oscars in its entirety, you're most likely well aware of the fact that they go on for about four full hours. So, there's very little doubt in my mind that your guests will get hangry AF if you don't offer them anything to munch on. Luckily, Uber Eats is coming in clutch for the Feb. 24 award show by offering a buy one, get one free deal, so it goes without saying that I will definitely be eating for two that night. LOL.

Through Uber Eats' Oscars BOGO deal, you will be able to get any two dishes for the price of one from a variety of awesome restaurants, such as by CHLOE, Dos Toros, Van Leeuwen Ice Cream, or Milk Bar, according to Uber Eats. The best part of all, however, is that unlike the Oscars, the deal lasts far longer than one night. In fact, you can get in on it for a full five days between Feb. 20 and Feb. 25, per Uber Eats. That's right — not only are there so many delicious options to choose from, but there's also so much time to take advantage of it. Even if you don't utilize it to supply your viewing party snack table, you can still get two meals for the price of one. That's pretty freakin' rad, in my opinion.

To take advantage of the deal, you don't even need a promo code! If you're ordering in one of the 21 Uber Eats markets blessed with this BOGO deal, the participating restaurants will have a "special BOGO menu" from which you can choose your free meal to go with your purchase, per Uber Eats. Also, to make things easier, there will also be a BOGO banner right at the top of your Uber Eats app from Feb. 20 through Feb. 25. Seriously, I don't think scoring a free meal has ever been so easy.

Are you unsure of what you want on your Academy Award party menu? No worries there. Uber Eats actually curated an Oscar-themed menu, by pulling together the most frequently ordered menu items inspired by a handful of Oscar-nominated movies. For appetizers, according to Uber Eats, they're featuring the Drama Queen Roll from Mikado (a tribute to Bohemian Rhapsody) and the International Caviar Flight from the Beluga Caviar Bar as a nod to Crazy Rich Asians.

Moving on to the main course, Uber Eats is featuring the Famous Star With Cheese from Carl's Jr. to honor A Star is Born, as well as The Maverick from &pizza, recognizing the documentary RBG. Then, last but not least, the service is featuring the Fresh Baked Incredible Cookie from Jason's Deli for dessert, which — you guessed it — recognizes the one and only Incredibles 2. That is most definitely a winning lineup in my book.

Don't get me wrong, I always look forward to watching the Oscars. But when there's food involved, that's a completely different story. What can I say? I'm a hungry gal just looking to be entertained, and most importantly — I'm always looking for food.