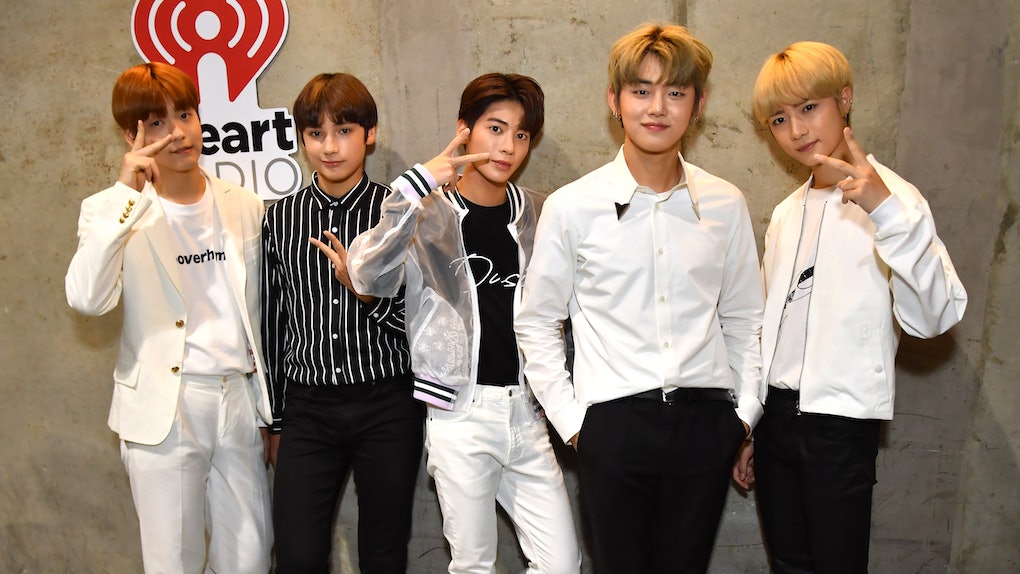 It's officially been a year since Tomorrow X Together debuted in March 2019. The group has been celebrating the occasion all week through a series of social media posts reflecting back at the past year. On March 13, TXT is celebrating their anniversary with a cover of Shawn Mendes' "In My Blood." TXT's Yeonjun, Soobin, Beomgyu, Taehyun, and Hueningkai previously talked about how much they love the singer's music, so TXT's cover of Shawn Mendes' "In My Blood" has been a long time coming.

TXT revealed they were Mendes fans in a June 2019 interview with Teen Vogue. While creating a "playlist of their lives," Hueningkai said Mendes' "Mercy" influenced him during his trainee days. "I heard this song when I was sixteen. I practiced this song when I was a trainee. I practiced this song for the vocals. Everything from the song beat to the lyrics, it's really awesome," he said, before TXT sang a snippet of "Mercy."

They only sang the line "Take it easy on my heart," but it was enough for fans to swoon hard. Ever since then, fans hoped TXT would cover a full song by Mendes, and now that day has finally arrived.

On March 13, TXT dropped a cover of Mendes' "In My Blood" on YouTube, and it's nothing short of amazing. The guys put a fresh spin on the song with their stunning vocals, while at the same time maintaining the track's original vibe. You can listen to it below.

TXT also shared a link to their cover on Twitter, along with the hashtags #To_MOA and #TXT1anniversary, implying the song was made for TXT's fans for the group's one-year anniversary. The best part is, TXT also made the cover free to download for fans via Google Drive.

Ahead of the cover's release, TXT shared emotional tributes on Twitter thanking fans for their support.

"I’m so amazed over how it’s already been a year since our team was formed… I think there have been a lot of very happy times in the past year! I feel like I’m seeing the memories go by like a panorama. I sincerely thank you. MOA and my members, thank you for always being a source of support for me," Hueningkai tweeted, according to a translation by Soompi.

I think fans can agree TXT's "In My Blood" cover was the ultimate anniversary gift fans could hope for.