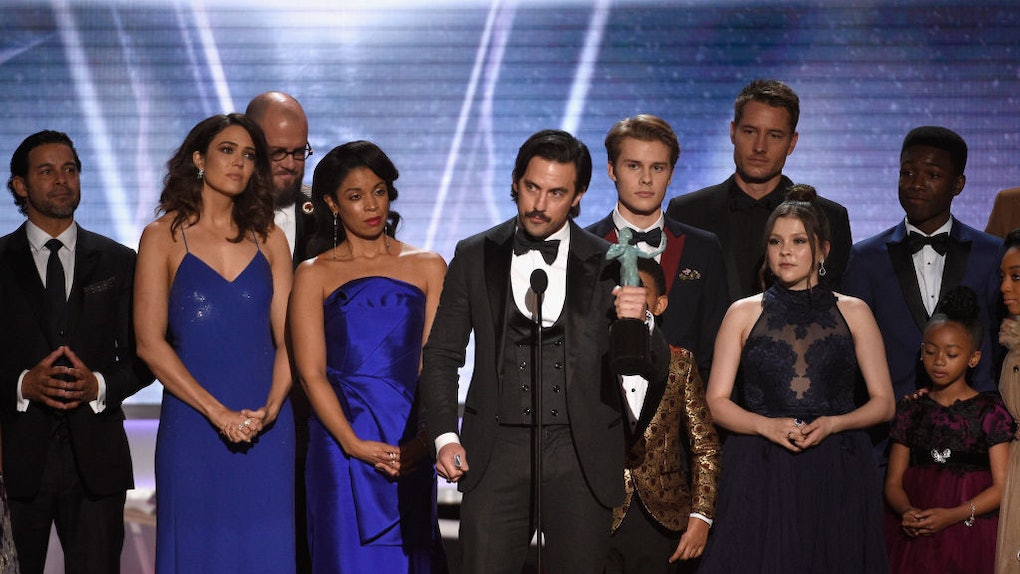 Tweets About 'This Is Us' SAG Award Win Will Make You So, So Happy

This year has been great for drama on television. Across all the award programs that honor the medium, from the Golden Globes to the Emmys to tonight's SAG Awards, drama has been a stacked category. There are heavy-hitters across the board, from Game of Thrones to The Handmaid's Tale. But even so, there are some shows no one expects to take the win, like the ones from broadcast networks, which have typically been shut out in favor of higher-budget cable fare. That's why This Is Us' SAG Award win for Outstanding Performance by an Ensemble in a Drama Series was a total shocker.

This was not This Is Us' only nomination tonight. As expected, Sterling K. Brown was nominated for Outstanding Performance by a Male Actor in a Drama Series for his role as Randall Pearson, and he walked away with the win, making a clean sweep for the actor across the board this year. (Some of his wins have even been historic.) But despite Brown's consistency in the winning department, no one expected This Is Us to be able to win in any overall category. At the Emmys and the Golden Globes this year, the show lost out to Hulu's The Handmaid's Tale both times. Last year, for Season 1, it lost to HBO's Game of Thrones at the Emmys, The Crown at the Golden Globes, and Stranger Things at the SAG Awards, respectively.

That said, no one expected This Is Us to take the Ensemble category Sunday night, especially with The Handmaid's Tale, the heavy-hitting winner all season, sitting there in the category as well. But perhaps the first hint things would be different was when Elisabeth Moss did not take the win for Outstanding Performance by a Female Actor in a Drama Series. Instead, it went to Claire Foy for The Crown Season 2. (Foy was so sure she wasn't winning, she wasn't even in attendance at Sunday night's ceremony.)

That suggested that The Crown might take the ensemble award... that is, if Game of Thrones didn't somehow magically reassert itself or Stranger Things didn't repeat their win from last year. And then, a miracle occurred...

This Is Us took home the W.

That is, when they didn't just outright start crying.

Look, the crying is a This Is Us fan thing. You wouldn't understand. It's what we do. (The Twitter emoji is a tissue box for heaven's sake.)

This acceptance speech from Milo Ventimiglia didn't help in the crying department either.

In his speech, Ventimiglia said:

We are just a small collection of a lot of very talented, very hardworking people that work on this show ... The people that watch with us every Tuesday night and embrace the show that reflects positivity and hope and inclusion, we love you. Thank you very much.

Milo Ventimiglia's speech wasn't the only one fans loved either.

Sterling K. Brown's earlier acceptance speech got lots of love as well. (And he wasn't played off halfway through either.)

Other fans took a cue from Milo's speech and thanked the crew as well.

But most fans didn't know who to root for and probably would have been happy with anyone winning. That's why this is such a hard category: Everyone deserves it, including This Is Us.

For the record, fans expect that the big reveal of Jack's death is happening this coming Tuesday, Jan. 23, so if Sunday's win causes a massive tune-in this coming week, there are going to be a lot of viewers who are starting with the solution to the puzzle, instead of the puzzle itself.

I should also note that Sunday, at least three of the show's actresses color-coordinated their blues on the red carpet — so the group looked like a set up there on sage.

Other fans noted it was the image of all the actors in the show from all the different stages of life that made for a weird but wonderful This Is Us family portrait.

Congrats to This Is Us tonight for a well-deserved win.