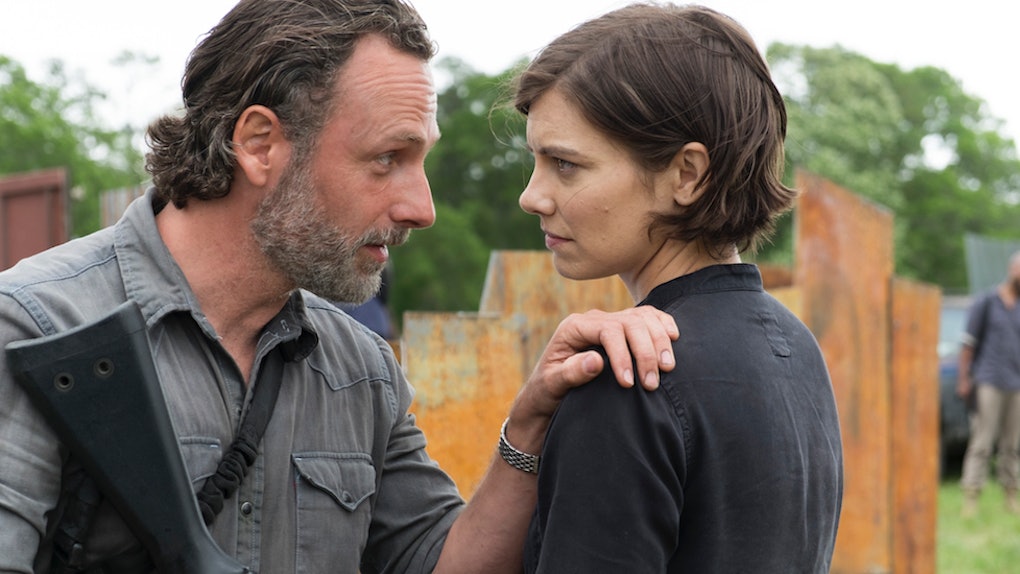 Pretty much everyone on Twitter was super perplexed about the, uh, apparently surprisingly rapid growth of the littlest Grimes. Even though she was born way back in Season 3, Judith has spent the past four seasons aging (or not aging) like she’s stuck in some kind of time warp. She’s gone from infant to infant to slightly older infant to baby to toddler and then suddenly, apparently — bam! To elementary school-aged kid. I know that TV in particular isn’t known for having the strictest adherence to realistic timelines (I mean, look at the Stark kids on Game of Thrones, who have literally gone through awkward puberty in what's meant to be one very long calendar season), but this is a little excessive.

Even weirder to fans?

Judith appeared to have aged at some weird Robin-Williams-in-Jack rates, and yet Maggie's never-ending pregnancy — fans found out she was pregnant way back in Season 6 — continued to never-end.

I mean, traditionally, these things should keep pace?

The answer to why Judith seems suddenly so much older is, of course, probably the fact that her advanced appearance is apparently part of some kind of flash-forward scene, set however many years after the war with Negan — and featuring Rick and his family in a nice, peaceful life in which he has the opportunity to grow a truly majestic beard and go to festivals with his little girl. Or it could be a hallucination, perhaps an optimistic vision of the more perfect world that our heroes are still hoping can be achieved. So, is it real? Who knows. But yeah, the wonky timeline maybe isn't so wonky after all.

Fans couldn't quite figure out where the scene fit in the timeline, whether or not it was real, or, you know, what the heck was going on.

Of course, there was a lot more going on in the episode than people wondering about the apparently unusually fast aging of a blond toddler (Renesmee, is that you??). I mean, there's the aforementioned all-out war with Negan thing, which was promised in last year's Season 7.

The premiere delivered, too — kind of. Even though there was no resolution (lol, it's only the season premiere, there's no way they're going to give us any kind of closure yet, what would they do with the next ten-plus episodes?), we did get to see some showdown between Negan's Saviors and Rick's Militia faction, including an awesome, badass moment in which the countdown ends on Rick's terms. (Spoiler: he started shooting when he damn well felt like it.)

Because every season premiere needs its badass moment.

But of course — there was also something else for fans to celebrate.

Namely, the fact that there's anyone left standing 100 episodes in.

I mean damn, when you lay it out like that. It's true that sometimes you just have to celebrate the little things. Like... at least three of your enormous ensemble cast making it from Episode 1 to Episode 100. In a show where the entire premise is "zombies are killing everyone," that's definitely an achievement.

I mean, small favors, I suppose.