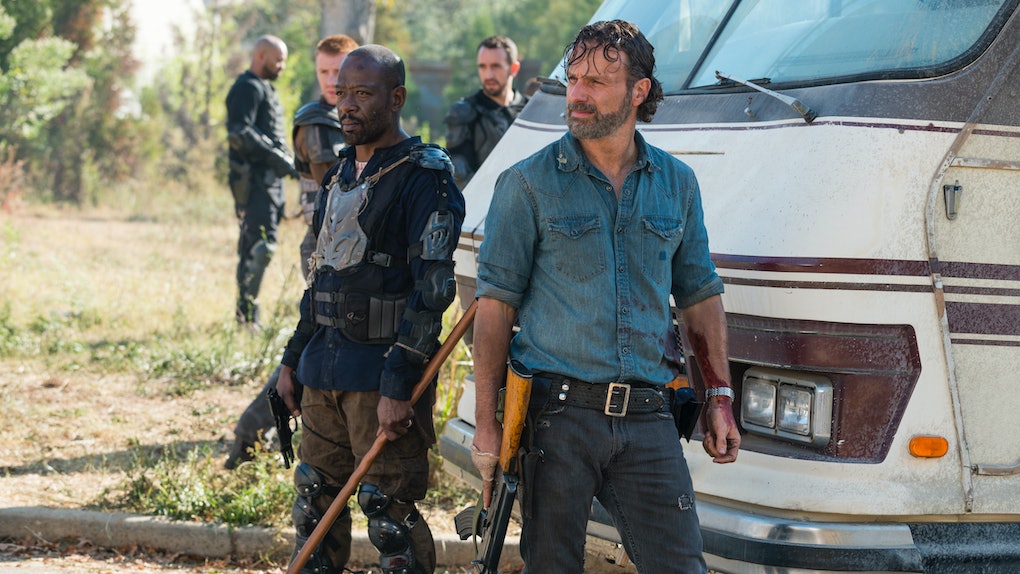 What Does The 'Walking Dead' Flashforward Scene Mean? Here's What We Know

In the middle of The Walking Dead Season 8 premiere, as the tensions ran the highest they had all hour with the first mano-a-mano between Rick and Negan, the oddest thing happened. We suddenly had a cross cut scene, one that featured Rick Grimes a few years down the line from now. His beard is longer and fuller. Michonne is thinner and grayer. And Carl is older and wiser. But what exactly was this weird The Walking Dead flashforward scene, and what exactly does it portend for our heroes?

It wasn't our only stop in the glimpses of a soft focused future. A second one came at the end of the hour, featuring Rick's beloved child Judith, now at school kid age, running in to lead him outside to see the "Big Owl" that they made for "the party." As Michonne points out to Rick, "People are taking this festival extremely seriously." Oh really? But what festival? Why an owl?

"I'm not afraid of a Big Owl. How big is he?" Rick murmurs as Judith leads him out into the world. A world where people aren't running around with guns, aren't shooting at zombies, aren't scrabbling in the dirt eking out a painful existence out of the leftovers of the old world.

Instead, this is a world of green, of farming and gardens in well tended yards, with old school homes, made of lovely brick, gleaming in the sunshine. And in one corner, yes, there is a large owl type mascot erected for the "festival."

It's a world with hope, a world worth fighting for, a world where the Negans have been defeated, and those who want to build a community together have won.

But is it real?

Fans are divided on whether or not this is a vision of things to come, the hopeful future the show is working towards, or if it's something else. For some, it strikes them to be a dream Rick is having, a beautiful, but unattainable dream, one that's playing all the time in his head, every time he closes his eyes.

It would certainly make sense that when about to be confronted by Negan and his cronies, Rick would see that vision again. It's everything that this war with Negan is about. Negan wants everyone to continue to live on the remains of the past, to feast upon the remains of the old without worrying about building the new. Get what's mine and screw everyone else.

This, on the other hand, is the endgame of the world that Rick wants to build. If it is a vision of things to come, it's the vision that Rick has seen in his mind's eye, a day the war is over. But it's also the world he's trying to build right now, along side the fighting.

This is a man who believes we can have both guns and butter. This future he's seeing, or flashing forward to, is not one that can be planted in a day. It's one that's been worked on, and tended to for years before we get to this vision. This is the world that Rick is working to build right now, as we see in the final segment of his speech to The Militia.

Because taking the time to start building this dream is the ultimate victory against Negan. It's why he does walk away from his chance to kill his rival, when Gabriel pulls at him, with a reminder that, once again, "it's not about you."

Negan doesn't have to die right away for this community of three different segments to grow together and make something special. That's the true meaning of winning, in the midst of a war on the ultimate terror.