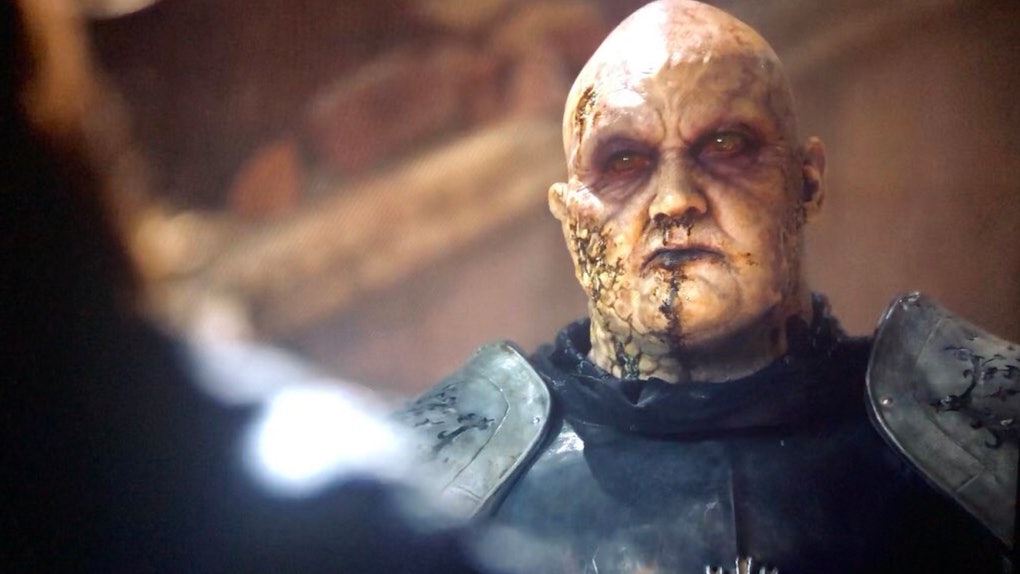 During the Sunday, May 12 episode of Game of Thrones, fans finally got to see Gregor "The Mountain" Clegane's face moments before his death — and it was terrifying. Viewers couldn't help drawing comparisons between the character and an Addams Family character, and you won't be able to unsee the comparison after seeing these tweets about the Mountain and Uncle Fester on Game Of Thrones.

Fans have been waiting seasons and seasons and seasons for even a hint that the Cleganebowl was actually going to happen (and wasn't just a much-buzzed-about internet theory fans were absolutely dying for), and during Season 8's fifth episode— the penultimate episode of the entire series — fans finally got their wish. Sort of.

Warning: Spoilers ahead for Season 8, Episode 5 of Game of Thrones ahead.

The episode plays out like this: Dany has a choice to make as she heads into the Battle of King's Landing, and while Tyrion advises Dany show mercy at the sound of the bell for the innocent of the city, the Dragon Queen choses the opposite. She lights up the city. The Mountain and The Hound meet on a stairwell as The Mountain attempts to usher Cersei to safety while the city falls around her. But when he meets up with his little brother, the plan changes. That's where the Cleganebowl tips off.

Removing his armored helmet, Game of Thrones fans steeled themselves to finally catch a glimpse of the zombie Qyburn created. Though fans had only been treated to a vision of his spooky, eerie red eyes for most of his GoT storyline, his facial reveal didn't exactly go as planned. Instead of looking absolutely terrifying (though, to be fair, he was), The Mountain just looked like, well; he looked like Uncle Fester from The Addams Family.

Not going to lie, the second I saw what Qyburn had created, I too was wholly surprised. I mean, seriously, all of this time, the face lurking under that huge steel helmet of armor was just Uncle Fester? Where was Gomez? The Hand? Cousin It? Was this not just the Cleganebowl, but the Addams-Family-Game-of-Thrones crossover that none of us had known to wish for?

"The Bells" had the hard work of setting up the finale of the Game of Thrones series. No small feat when you've got a slew of characters still to be killed off: a recently-gone Mad Queen and a fire-breathing dragon, a second, unofficial war to kick off and conclude all in the same episode, and two sets of sibling deaths to see through. But the episode did what it set out to do. I'm sure fans will be split in the coming days on whether or not the Game of Thrones writers' room lived up to their standards, but one thing is for sure: Fans definitely didn't expect The Mountain to look like Uncle Fester. If this is GoT's last and final joke, at least it was a good one.