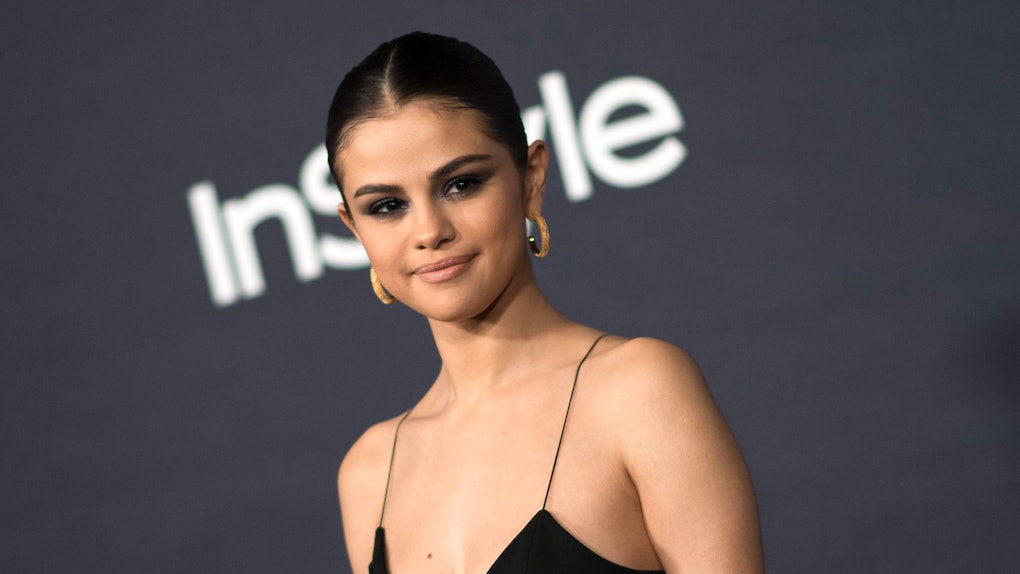 Selena Gomez's "Wolves" is finally here! The singer just dropped her collaboration with Marshmello, and fans are already in love with the new single (maybe just not with the cover art...). Gomez dropped the "Wolves" song lyrics yesterday, Oct. 24, in anticipation of the song's release today, and right off the bat fans were loving how romantic they were. But one thing her fans realized was that the music video for "Bad Liar" hinted that Selena Gomez's "Wolves" was going to be a thing.

You see, in the "Bad Liar" music video, Gomez is a high school student (and a dad, and a mom, and a teacher, this video is a lot of things) in the '70s. In one of the scenes, she's playing basketball during her gym class and her uniform says "wolves" on it. Fans think this was Gomez low-key dropping the name of one of her future singles right before their eyes. One fan called her the "queen of dropping hints," and given the fact that she teased the "Fetish" music video at the end of "Bad Liar," that fan isn't very far off.

Once they realized the hint from Gomez they completely missed, fans freaked out.

"Wolves" just dropped online, but there's only an audio video as of right now, so we can't know for sure yet if the above fan theory is correct.

It doesn't seem likely the song will be a continuation of the "Bad Liar" narrative, however. Gomez probably just likes to drop hints for her fans to see if they catch on to them.

Whether or not "Wolves" has anything to do with "Bad Liar," fans think it's a jam.

In an interview about the song, Gomez said she fell in love with an early version of the track when she was working in Japan.

In an interview with Beats 1, Gomez said, "This was a song that I heard in Japan for the first time." She continued,

I was talking to Andrew Watt, who is one of the writers I've worked with for years, played a rough version and I thought it was really beautiful. And he sent it to Marshmello, and we ended up talking. We created a really cool tone and a story with it. And the song is very beautiful and personal, and the lyrics just have a whole story of its own. Weirdly, at the same time I was working on it in Japan, I was going through stuff too, so it's mirrored everything.

She's not wrong when she says the lyrics tell a story of their own. Check out some of the "Wolves" lyrics:

In your eyes, there's a heavy blue

One to love, and one to lose

I wanna feel the way that we did that summer night, night

All for you, yeah all for you

Uh, yeah, those are emotional AF. Maybe the stuff she was "going through" when she first started working on the song was relationship stuff with The Weeknd? Whatever the inspiration, people can't stop making the same joke about one particular lyric in the song.

One line in the chorus says, "I've been running through the jungle, I've been crying with the wolves." People were quick to hit Gomez with the "first of all" meme, pointing out that wolves don't live in jungles.

Honestly, these tweets made me LOL. But let's be real, I'm sure Selena Gomez knows wolves don't actually live in a jungle. She's running through the jungle, and then she's crying with the wolves in a completely separate location! Right... ?