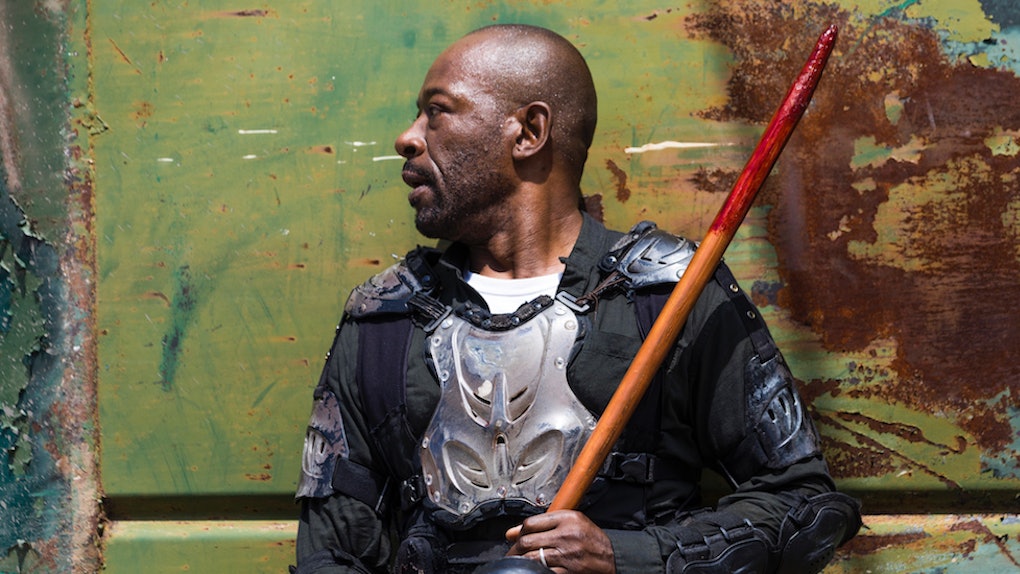 On the second episode of The Walking Dead's Season 8, "The Damned," the show came out with guns blazing. Following the (literally) explosive opening shootout scene, the show's Twitter fanbase went into a frenzy with tweets about Morgan on The Walking Dead. Fans were on a total roller coaster wondering whether or not Morgan was dead — and if he wasn't, what was happening?

About 15 minutes into the episode, Morgan was caught in a shootout with the Saviors and apparently shot and (maybe?) killed. Considering he had just said "I don't die" right before the scene, fans were already suspicious. that the line was written to foreshadow his death. Neither did it help that there'd been a considerable amount of speculation prior to the start of the season on who will survive — and Morgan's name is at the top of many hit lists for the season.

Actor Lennie James, who plays Morgan, addressed the topic of his character's death. Following the Season 8 trailer, which featured Morgan saying, "I don't die," questions came up surrounding the line that had everyone talking on Twitter. Co-star Jeffrey Dean Morgan mocked the line: "'I don't die' is probably not the best plan," he said according to ComicBook.com, hinting that Morgan's death this season is imminent.

To boot: The Hollywood Reporter gave Morgan's death a 95 percent chance of happening, referencing the fact that his connection to Rick evidences his likeliness that he will get axed this season. To sum up: Morgan is the first man that Rick meets in the apocalypse, and has a tumultuous history that now warrants him to crack at any moment. The Hollywood Reporter suggests that Morgan's deal could serve as a "wake-up call" for Rick, alluding to his closing line in the Season 8 premiere: “My mercy prevails over my wrath.”

So because of the speculation, fans naturally freaked when the scene closed without revealing whether or not Morgan did, in fact, die.

Many Twitter users referenced the "I don't die" line in their reactions.

But all was not lost. Following the gut-wrenching scene, viewers saw Morgan lying on the ground where he was shot, opening his eyes.

And fans on Twitter let out a collective sigh of relief.

After Morgan woke up, viewers could clearly tell that he was reverting back to "crazy mode" — and was about get absolutely savage.

Morgan has an extensive history of struggling with PTSD following the deaths of his wife and son. Morgan went on a zombie-killing rampage after the two deaths, completely grief-stricken. His mission to kill every last zombie on Earth eventually took its toll and turned Morgan into a straight-up murderer, killing anyone who got in his way.

After a period of time where he swore off killing and was completely against the idea of killing the Saviors, Morgan broke his own promise during the Season 6 finale when he killed Roman in an effort to save Carol. Though fans widely regarded this kill as justified, it was, nonetheless, a kill, which led to the brutal killing of his friend Richard in Season 7. With that kill, the creed that kept Morgan in line was gone. That means he might be ready to snap at any moment — and if there's nothing holding him back anymore, Morgan's even more likely to wind up dead himself.

Clearly, Morgan snapped in "The Damned," and this may very well be the beginning of the end of his character. Although he didn't die in tonight's episode (phew), the fact that he's reverting to his old killing ways might make this theory all the more likely. This will definitely make for an interesting season.

There's no sign telling us when we can expect Morgan to die, or even if he will. But if he does, there is sure to be a slew of overwhelmed reactionary tweets to follow.

More like this
In 'Riverdale' Season 5, Toni Topaz Is The Black Superwoman Without A Cape
By Erika Hardison
These Tweets About Regé-Jean Page Leaving 'Bridgerton' Are Royal Bummers
By Cianna Garrison
Here's How To Vote For The Next 'American Horror Story' Theme Among 6 Options
By Cianna Garrison
Stay up to date