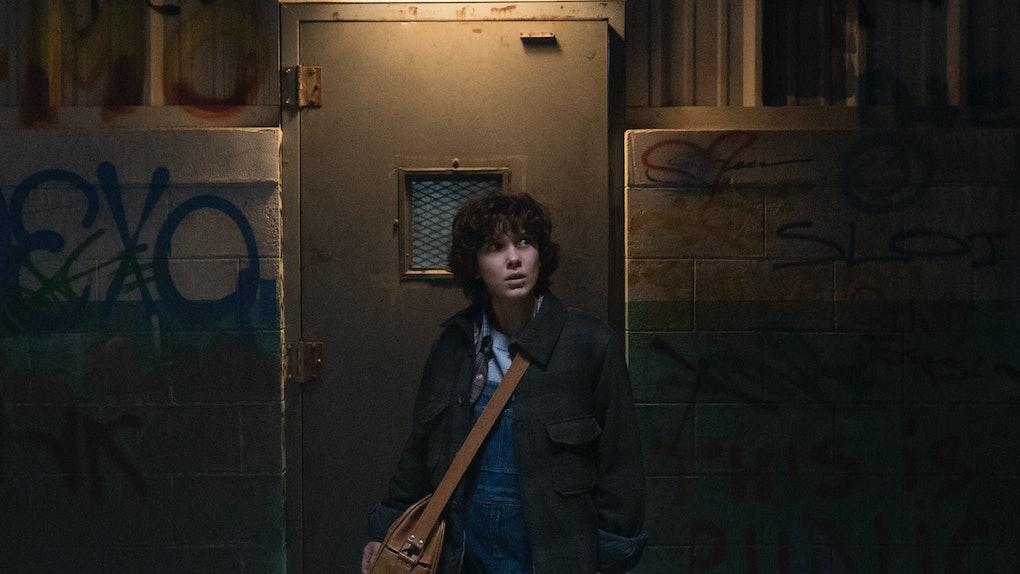 Hear ye, fellow Netflix addicts, come one, come all and gather round, for today is the day the Netflix gods hath made: That's right, after an excruciatingly long hiatus, Stranger Things is back for our binge-watching pleasures and it's low key better than ever. Warning: This post has spoilers for Stranger Things Season 2. The second season of the critically acclaimed Netflix mystery was uploaded in full to the streaming service on Oct. 27 and, already, fans of the show are freaking out because — you guessed it — Eleven is back. Naturally, Stranger Things diehards are excited to see Hopper has been taking care of El, and their tweets about Eleven and Hopper prove they have just freakin' lost it.

If you've been anxiously awaiting Season 2 of Stranger Things since last July, which — let's be real — you have, then you'll remember the mysterious Season 1 finale had us all shook after El destroyed the Demogorgon and vanished into thin air. For a solid 10 minutes it looked like we had seen the end of Eleven and, TBH, it was more devastating than when Nancy discovered Barb dead AF in the Upside Down. The next scene, however, showed Hopper dropping some neatly saran-wrapped Eggo waffles (aka El's version of fine-dining) off in a box in the woods and, since then, the major question on all of our minds has been: Does Hopper know where Eleven is?

Now that Season 2 is streaming, we've got the answer and it does not disappoint: Hopper has known where Eleven was the entire time, and, what's more, he's been taking care of her.

Understandably, this is great news for fans because Stranger Things without El would be like Joyce without grease in her hair or Hopper without a cigarette in his mouth... just not the same.

On top of that, we finally got to see some of the "rich emotional arc" David Harbour (the actor who plays Hopper) promised us last October at New York Comic-Con. Indeed, for some time now, fans have theorized Hopper is Eleven's dad and, though some have discredited that idea, many have held on to hope; one fan even pressed Harbour last year during the Stranger Things panel at NYCC, asking him if Hopper would adopt El in Season 2. Without giving too much away, the actor responded,

We end season one with Hopper sort of selling Eleven out. He doesn't know that she's capable of destroying groups of people, but he does kind of give her up to go into the Upside Down to save Will. [...] I think it's a very complex relationship. So should Eleven reemerge, and Hopper knows something about that with those Eggo waffles...there's a lot of territory there.

At the end of Season 2, we see Eleven's new birth certificate, so Hopper becomes a father-like figure for her (aside from, ya know, leaving her alone in a house in the woods for hours at a time). Harbour wasn't lying when he said it's a "very complex relationship"; clearly, he knows (and has known) something we don't, so now the question is: How far back does their backstory go?

While Season 2 doesn't answer that question, the fact that Hopper gets Jane's birth certificate in the finale episode lets us know we'll be seeing more of their relationship next season. Though I'm sure there'll be a bigger, more demonic monster to deal with in Stranger Things 3, at least we know El is safe for now.