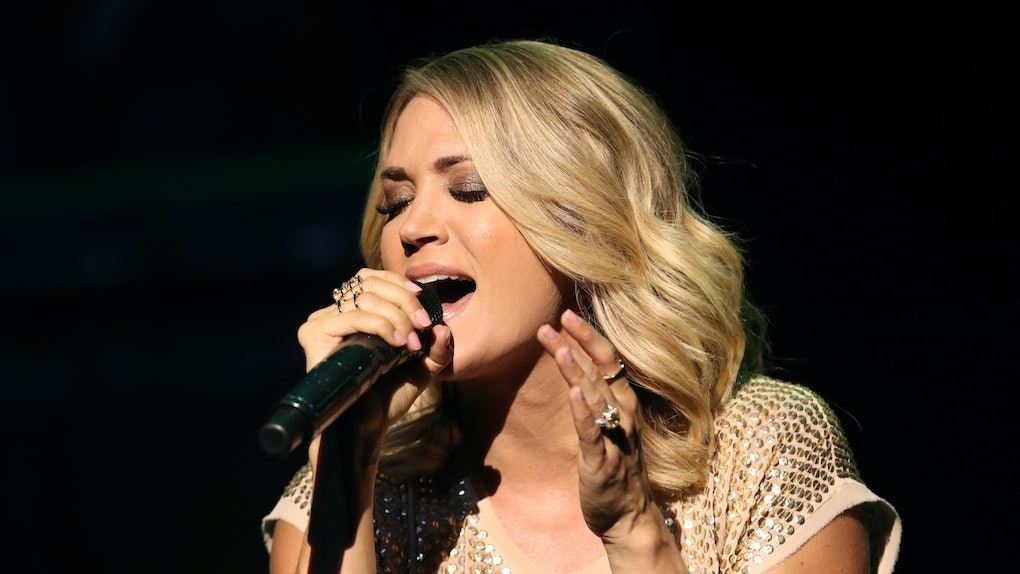 Carrie Underwood revealed in an emotional letter to fans on Jan. 1 that following a bad fall outside her home in Nashville in November, in addition to breaking her wrist, the singer had to get 40 to 50 stitches on her face. In the letter, she promises fans she's making her comeback soon and is working on new music, but the letter also came with a warning saying she might look different when she returns due to the stitches. Most fans offered their support to the singer, but some tweets about Carrie Underwood's face stitches accuse the singer of lying about her injury. On Nov. 15, Underwood tweeted that she had surgery on her wrist, but it wasn't until yesterday that she revealed the injury to her face. Some Twitter users are saying she actually had facial plastic surgery and is using this injury as a coverup, which is all kinds of messed up. Part of Carrie Underwood's letter to her fans read,

In addition to breaking my wrist, I somehow managed to injure my face as well. I'll spare you the gruesome details, but when I came out of surgery the night of my fall, the doctor told [my husband] Mike that he had put between 40 and 50 stitches in. Now, here we are 7 weeks later and, even though I've had the best people helping me, I'm still healing and not quite looking the same.

Underwood hasn't been seen much since the incident, but one photo posted of her after a workout on Dec. 12 is making some people doubt her injuries. In the photo posted by celebrity chef Adrienne Gang, Underwood's face seems to be in good health, although you cannot see one side of her face entirely.

There are lots of people on Twitter saying they think Underwood just got a facelift based on this photo.

Let's break down all the reasons this isn't cool at all.

First of all, it's just another way of policing women's bodies. Whether you believe she got plastic surgery or that she's telling the truth about her accident, it's no one's business what she does with her own body. It's also just messed up as hell to accuse someone of lying when they've just come forward detailing the effects of a traumatic injury they sustained. Underwood has stayed out of the public eye since the fall — there's a reason for that. She had to have a serious surgery on her wrist, and 50 stitches in your face is no joke. Not cool to doubt what she says just because she's a celebrity.

In another part of her letter, she tells fans, "I honestly don't know how things are going to end up but I do know this: I am grateful. I am grateful that it wasn't much, much worse. And I am grateful for the people in my life that have been there every step of the way."

Despite the trolls who are saying she's lying, there are plenty of people offering their support for Underwood.

Underwood hasn't posted many pictures of her face since the accident, but she has still been active on social media. She posted this selfie last week, but her face was covered by one of the wraps in her Calia by Carrie line.

Her caption didn't reveal anything about her injuries. It read, "When in 5 degree weather, wrap your @caliabycarrie scarf around your neck and face...you keep warm AND look like an awesome winter snow ninja! #WinWin #StayThePath #LetItSnow #BabyItsColdOutside."

Fans have been super supportive in the comments section of this photo.

Underwood's letter promises she's going back to the studio to make new music soon, so let's focus on the excitement of that.