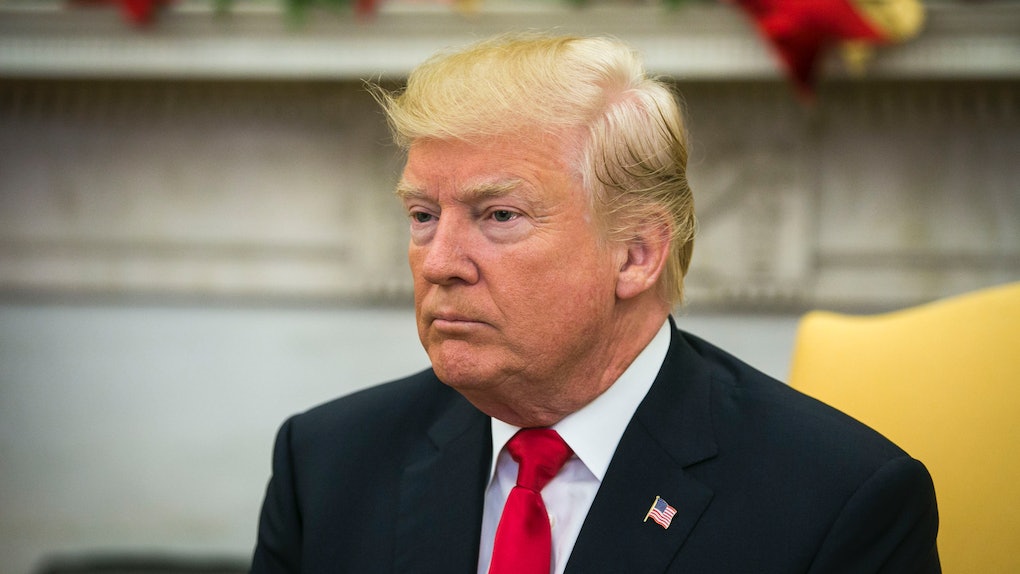 President Donald Trump seems to have forgotten a key talking point while crafting his statement on World AIDS Day. Namely, he totally ignored an entire segment of the population who suffer disproportionally from the disease. Trump's statement on World AIDS Day left out LGBTQ+ people altogether, which is both so infuriating and not at all surprising.

On Dec. 1, Trump released some thoughts on World AIDS Day, an annual event that raises awareness and commemorates those who lost their lives to the disease. Trump's statement read, in part,

Today, on World AIDS Day, we honor those who have lost their lives to AIDS, we celebrate the remarkable progress we have made in combatting this disease, and we reaffirm our ongoing commitment to end AIDS as a public health threat.

Since the beginning of the HIV/AIDS epidemic, more than 76 million people around the world have become infected with HIV and 35 million have died of AIDS. As of 2014, 1.1 million people in the United States are living with HIV. On this day, we pray for all those living with HIV, and those who have lost loved ones to AIDS.

It's a pretty vague proclamation, and doesn't at all touch on the two communities that have suffered, and continue to suffer, the most from the disease. Gay and bisexual men make up 82 percent of HIV diagnoses among males and 67 percent of the diagnoses altogether, according to the U.S. Department of Health & Human Services. African American gay and bisexual men are diagnosed the most frequently with HIV.

This oversight definitely wasn't lost on Twitter users, many of whom pointed out the glaring flaws in Trump's statement.

Trump's remarks certainly marked a departure from his predecessor, Barack Obama, who spoke plainly and directly about the populations that are suffering the most from HIV.

"Here in the United States, we need to keep focusing on investments to communities that are still being hit hardest, including gay and bisexual men, African Americans and Latinos," Obama said during his 2013 World AIDS Day speech.

He doubled down again in his 2016 speech, noting, “gay and bisexual men, transgender people, youth, black and Latino Americans, people living in the Southern United States, and people who inject drugs are at a disproportionate risk.”

Easy, simple, and accurate. It's just plain confusing (and perhaps slightly pointed?) that Trump neglected to put a face to those suffering the most from HIV.

This, unfortunately, isn't the first time that the president has ignored the LGBTQ+ community.

The Trump administration completely failed to acknowledge Pride Month in June, which celebrates the historical, social, and political impact that the LGBTQ+ community has had on the world. While certain members of Trump's circle sent out supportive tweets, like Secretary of State Rex Tillerson and Ivanka Trump, the president remained silent.

On Jan. 27, Trump released his statement on International Holocaust Remembrance Day, and completely neglected to mention the 6 million Jews who were killed or anti-Semitism in general. His remarks, in part, read,

It is with a heavy heart and somber mind that we remember and honor the victims, survivors, heroes of the Holocaust. It is impossible to fully fathom the depravity and horror inflicted on innocent people by Nazi terror.

It turns out, the Trump administration purposefully left out any mention of Jews because, White House spokesperson Hope Hicks told CNN, “despite what the media reports, we are an incredibly inclusive group and we took into account all of those who suffered.”

OK, so, there's inclusive and then there's completely ignoring a population that disproportionally suffered.

It's worth noting, once again, that Trump's predecessors had a very different take on the day of remembrance.

Obama’s statement pointed to the “6 million Jews and millions of other people” killed by Nazis, and President George W. Bush commemorated the 60 year anniversary of Auschwitz’s liberation by calling the day “a reminder that when we find anti-Semitism, we must come together to fight it.”

Not so difficult, right? It's at least comforting to know that even if Trump isn't able or willing to acknowledge populations who have suffered, there are many, many people and organizations that do. Big thanks and cheers to them.