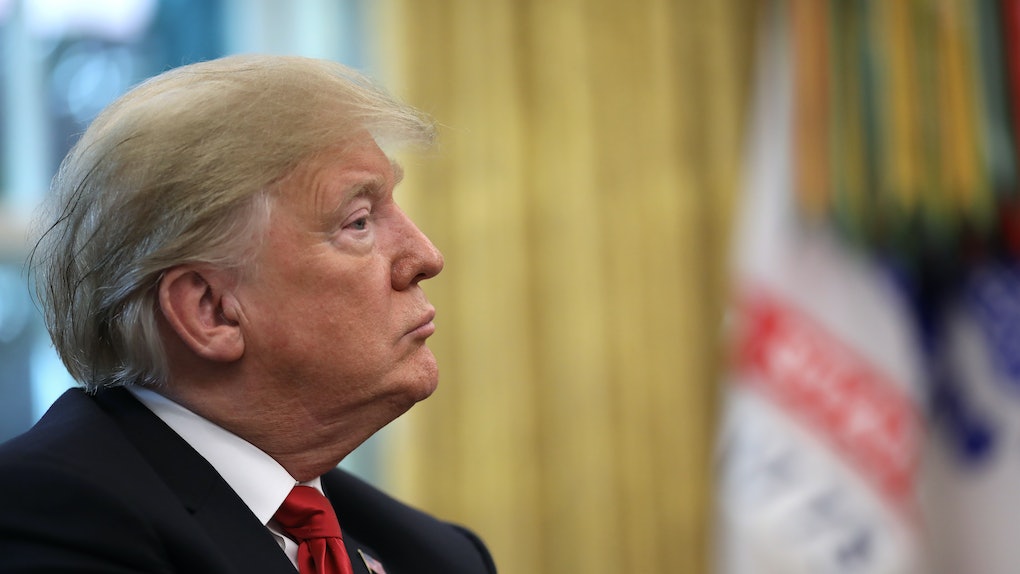 For almost a year now, the Trump administration has been fighting to be able to remove limits on detention for migrant children. Finally, he might be getting what he wants. On Aug. 21, President Donald Trump announced new immigration laws for children and families that would undo decades of protection for young migrants.

In a press release on Aug. 21, the White House said it would end “outdated” immigration policies that prevent the government from detaining migrant children for over 20 days. Under the new regulations, the administration will be able to hold immigrant families, including children, in custody indefinitely, as well as change licensing requirements for facilities where migrant families are held. The Department of Homeland Security (DHS) did not immediately respond to Elite Daily's request for comment on the change.

The move will roll back the Flores settlement, a 1997 ruling that laid out standards for the treatment of young migrants, requiring that the U.S. government both detain unaccompanied migrant minors in the “least restrictive” settings and release them as quickly as possible. In 2015, the courts upheld and clarified the Flores settlement, also called the Flores agreement, and established the 20-day limit for detaining children. The regulations, which were first proposed last fall, are scheduled to go into effect in 60 days. However, it will almost certainly be challenged in court, which will likely draw out the timeline.

The Flores settlement is at the heart of last year's “zero-tolerance” policy and family separations at the border, under which all adults crossing the border without documentation were prosecuted. Since the agreement banned children from being detained for the amount of time required to prosecute adults, the administration began separating families in order to detain and deport the adults. Though no official policy required families to be split up, the mass separations were somewhat made possible because of the settlement: Minors were legally required to be released, while the government wanted to detain and prosecute the adults. In September, the administration announced preliminary plans to end the Flores settlement.

Prior to the "zero tolerance" policy, detained families with children were often released together, in order to avoid violating the agreement — something Trump has referred to as “catch and release.” In a tweet after the new announcement, Trump quoted Brandon Judd of the National Border Patrol Council that his new policy would effectively end this practice.

Now, under the finished law, families can just stay together while being detained indefinitely. In a speech on Aug. 21, DHS Acting Secretary Kevin McAleenan echoed Trump by saying this would curb what he called a “dramatic” increase in immigration while upholding the Flores settlement’s original intent to "ensure appropriate care for all children.” He said the new rule would enforce a high standard of care, facilities and information resources for detained children.

Critics have condemned the rule change, suggesting that it puts children and families at risk. The White House and DHS did not respond to questions about criticisms regarding children's safety.

McAleenan insisted the new rule mirrors Flores by protecting migrant children in safe detention conditions. "All children in the Government’s care will be universally treated with dignity, respect, and special concern, in concert with American values and faithful to the intent of the settlement," McAleenan's prepared statement said.

Administration officials acknowledge that a court challenge will likely delay the new legislation's 60-day implementation, per The New York Times, but regardless, the Trump administration has surely followed through on its promises. No matter what happens next, it seems to involve more detained children.