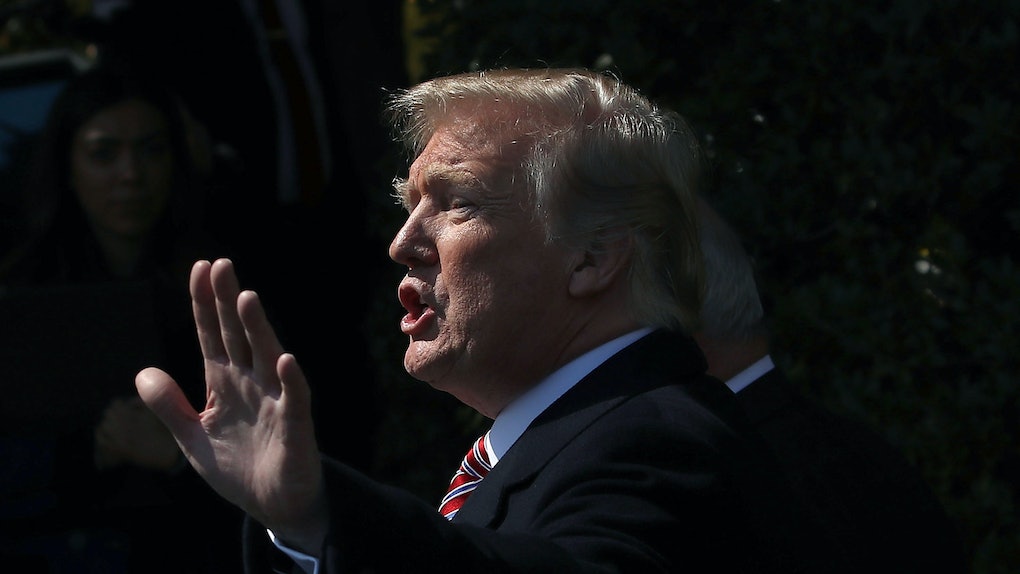 Welfare programs in the U.S. are designed to promote the basic well-being of people in need and help them transition to financial independence. But things could be about to change, as the White House just took a major step to reduce its spending on those programs. President Donald Trump's executive order on welfare and food stamps makes it harder to get, and it's unclear what will happen next.

Trump signed the order on Tuesday, April 10, while news of his personal attorney's office being raided by federal agents continued to dominate headlines. In 2017, the federal government spent more than $700 billion on low-income assistance, according to the order.

"Unfortunately, many of the programs designed to help families have instead delayed economic independence, perpetuated poverty, and weakened family bonds," the executive order reads, going on to say, "The Federal Government’s role is to clear paths to self-sufficiency, reserving public assistance programs for those who are truly in need."

The document strongly implies that not all who take part in the government's welfare programs are deserving of financial assistance — a major talking point of Trump's campaign and a staple Republican talking point. The order directs the Departments of Health and Human Services (HHS), Housing and Urban Development (HUD), Agriculture, and others, to review their welfare offerings and investigate ways of pumping people back into the workforce, and thus, reducing the government's spending on such services. The order highlights increasing work requirements for public assistance. The purported push to reduce poverty had been on the president's agenda for months, Politico reports, but that internal debate at the White House held things up.

"We can lift our citizens from welfare to work, from dependence to independence, and from poverty to prosperity," President Trump said in a statement.

Executive orders are not legislation, per the American Bar Association (ABA), because they require no approval from Congress. They are simply published directives from the president that deal with any operations of the federal government. According to NPR, HHS began offering states more flexibility to impose work requirements on Medicaid recipients in January 2018. That requirement is only for able-bodied adults — not children or those who qualify for Medicaid due to disability.

The degree to which the government funds welfare programs has been a hotly contested issue between Democrats and Republicans for years, stemming from what they're used for and who uses them. So, to clarify, there is no federal program actually called “welfare,” but rather, it is a catchall term for financial assisting services. Moreover, a HuffPost/YouGov survey in February found that the American public has a distorted and racist perception that drastically overestimate the number of African-American benefactors.

To apply for Supplemental Nutrition Assistance Program (SNAP), more commonly known as food stamps, applications send details of resource and income limits to the state government. SNAP income and resource qualifications are updated annually. Of some 47 million Americans benefitting from the SNAP program, about 40 percent are white, according to 2013 data from the U.S. Department of Agriculture as reported by The Huffington Post.

What's more, advocates for the poor continue to argue that many government-assistance benefactors do have jobs, but that their income is entirely too low to pay for rent, groceries, and health care, according to an NPR report. "Evidence shows that such [work] requirements have few long-term positive effects on employment and often result in families losing help they need to afford the basics," Sharon Parrott, a senior fellow at the left-leaning Center on Budget and Policy Priorities, told NPR.

Rebecca Vallas, vice president of poverty for the Center for American Progress, took to Twitter immediately following the announcement on Tuesday, April 10, to criticize the order and remind people that it does not itself effectuate a change, but could signal things to come.

"Worth nothing: This EO itself doesn’t carry any real weight — it directs agencies to review programs that help families make ends meet," Vallas tweeted. "Its real purpose is to smear the programs Trump and his colleagues in Congress want to slash to pay for their millionaire tax cuts."

Vallas added, "If Trump were really trying to promote 'self-sufficiency' — a concept he clearly doesn't think applies to the millionaires he just gave massive tax cuts — he'd be all over raising the minimum wage."

The executive order was signed to little media fanfare, but Twitter users reacted to the White House announcement.

Conservatives were apparently thrilled by the news.

Majority Leader Sen. Mitch McConnell told NPR that any legislative push to scale back such programs must be bipartisan — which is not likely in this election year. So while the president's executive order has been published, Americans likely will not see changes until after November.