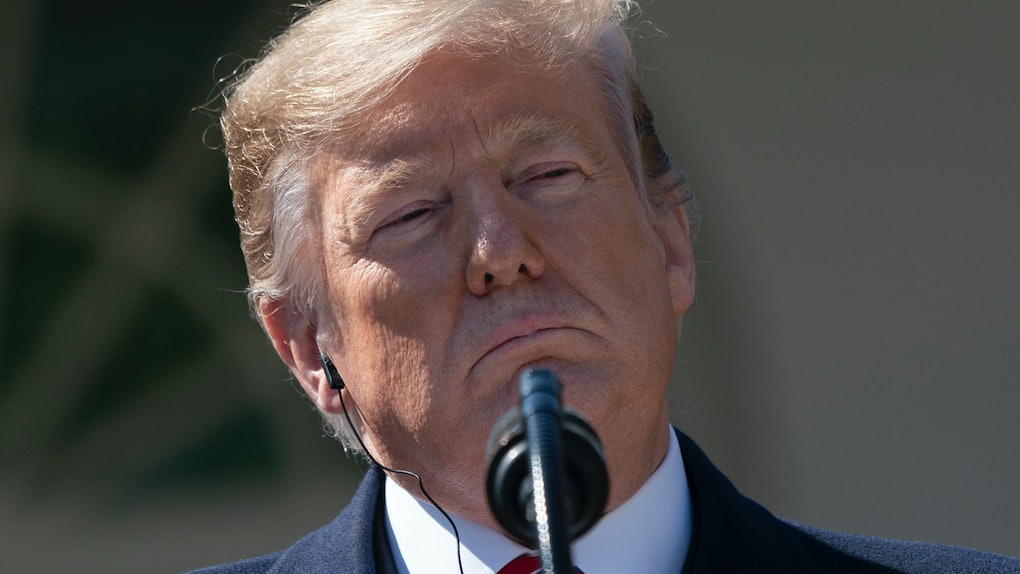 If reports are to be believed, FBI Special Counsel Robert Mueller's investigation into possible collusion between Russia and members of the Trump 2016 campaign is nearing completion. While there's no guarantee the public will ever see the report, as the decision to share it rests with Attorney General William Barr, President Donald Trump is apparently OK with it. If Trump's comments on whether the public can see the Mueller report surprise you, you're probably not alone.

He made the announcement on Wednesday, March 20 while speaking to reporters on the South Lawn of the White House, per The Hill. He expressed hopes that it will vindicate him. “I don’t mind,” Trump apparently said in response to a reporter who asked if the public has a right to see the investigation's final report. “I mean, frankly, I told the House, if you want, let ‘em see it.”

He added that his supporters, who helped him win "one of the greatest elections of all time in the history of this country," want to see the report.

"I want to see the report. You know who wants to see it? The tens of millions of people that love the fact that we have the greatest economy we've ever had," he continued. "I look forward to seeing the report." Elite Daily reached out to the White House for additional comment on his remarks, but did not immediately hear back.

Let me just say that these are interesting comments to hear from a man who was just on Twitter on March 15 saying that there should be "no Mueller report" after the House passed a resolution calling to publicize it.

On the other hand, Trump has maintained that there was no collusion between his campaign and Russia, and routinely criticized the investigation (which has nabbed six of his former associates and several Russian nationals and companies), calling it a "witch hunt" and "bullsh*t." So at this point, maybe he's just ready to clear his name by letting the public see what's up themselves. Elite Daily previously reached out to the White House for comment on those criticisms, but did not hear back.

His comments come amidst speculation that the investigation is coming to a close. The special counsel's office previously declined to comment to Elite Daily on whether the investigation was wrapping up and whether a final report was in the works. But one of the latest signs that the probe is nearing its end came on March 18, when it was announced that a top prosecutor, who handled former national security adviser Michael Flynn's plea deal, was leaving the investigation, marking the second departure as of late.

However, even if it's true that the probe is winding down, the public may never get a glance at the report, given there's is no rule that requires it be made public. The only way you and I may ever be able to feast our eyes on it is if Barr follows through on his plans to be as "transparent" with Congress and the public as possible (as long as it's "consistent with the rules and the law," as he said).

Let's bank on the latter and hope that Barr will come through. Who knows — maybe Trump's latest words will have an effect on his decision.