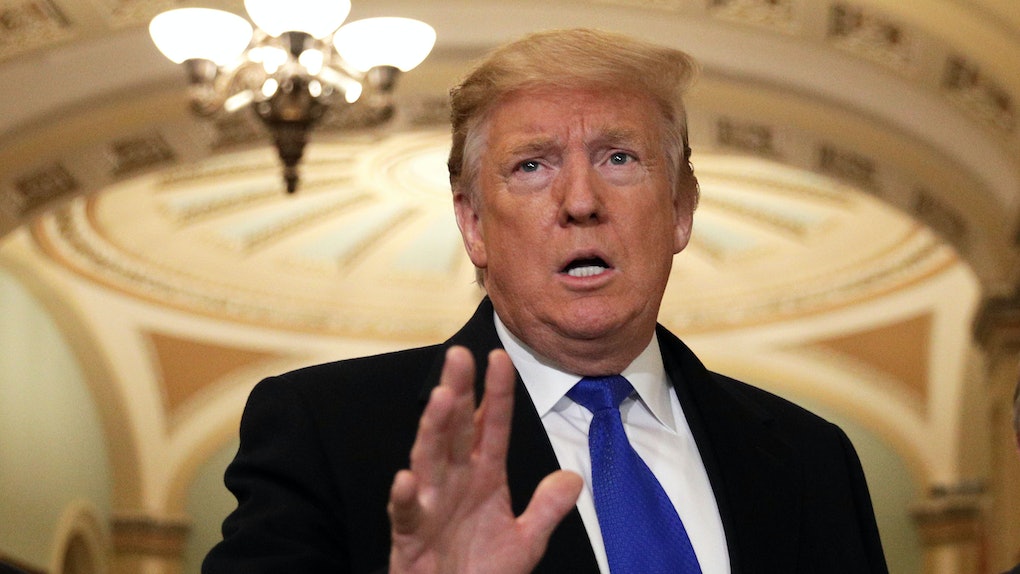 It looks like there are renewed tensions between the United States and North Korea following the seizure of a North Korean cargo vessel and the foreign country's launch of two short-range ballistic missiles. This seems to end more than a year of unexpectedly friendly ties between the two nations, and President Donald Trump is not happy about it. In a recent conversation, the president complained about North Korean leader Kim Jong-un and his alleged treatment of others, including his very own uncle. Trump's comments on Kim Jong-un's uncle's death sound like something straight out of Game of Thrones.

The president apparently made the comments while speaking at a private gathering of supporters. Citing a source who attended the event and spoke under the condition of anonymity, The Washington Post reported on Thursday, May 9 that Trump sounded off about Kim's tough demeanor and firm stances. “It’s not like [I’m] dealing with the president of France,” Trump reportedly said.

The president reportedly went on to tell the group about the death of Kim's uncle Jang Song-thaek, describing in "[graphic]" detail how Kim allegedly killed his uncle and then supposedly displayed his head for onlookers to see. In a statement to the Post, White House Press Secretary Sarah Huckabee Sanders said that Trump "likes Chairman Kim." The White House did not respond to further questions from Elite Daily.

Um, what type of King's Landing stuff is that?

There's some cloudiness around Trump's claim, though. According to The Guardian, Jang was killed in December 2013 over "factionalism, corruption and dissolute [behavior]." The Post notes, though, that there is no record of his body being put on display, and that Jang is believed to have been killed by a firing squad. So, it's not exactly what Trump reportedly painted it out to be. Maybe someone has been watching a little too much Game of Thrones.

For what it's worth, while North Korean state media confirmed Jang's execution, there was a now-debunked rumor afterwards that Jang had been fed to dogs, a story which appeared to have started via a Hong Kong tabloid. So, Trump's not the first to have taken a depressing story and made it even more dramatic.

To boot, it appears that things aren't going as smoothly between the U.S. and North Korea as they once were. The two countries have been forging a cordial relationship since 2018, when Trump and Kim met for a historic summit to talk about a nuclear deal, but those conversations have since stalled and things seem to be getting heated.

On Thursday, May 9, federal officials seized a North Korean cargo vessel suspected of violating U.S. sanctions, marking the first time a North Korean ship has been claimed by the U.S. over sanctions violations, according to NBC News. North Korea has 60 days to respond to the allegations in federal court. The move came just hours after the foreign nation fired two short-range ballistic missiles, marking the second time it's done so in a week.

North Korea also fired projectiles off its eastern coast on May 4, which analysts suggested was done in an effort to force Trump's hand in easing sanctions on the country. North Korea has long asked for sanctions relief in exchange for giving up its nuclear weapons, but its asked for more than Trump is willing to give.

Analysts also told The New York Times that the move suggested North Korea was considering reimposing its moratorium on nuclear and missile tests, but Trump didn't seem so worried about any of that. In a tweet shared later on May 4, he wrote that he was "with" Kim and didn't believe the North Korean leader would do anything to jeopardize their ongoing negotiations.

Is it just me or does that comment conflict with his newer one? Winter or no, it sounds like trouble is coming.

More like this
These Tweets & Memes About Matt Gaetz's Venmo All Make The Same Joke
By Cianna Garrison
The More Contagious B-117 COVID Variant Is Now The Most Common Strain In The U.S.
By Rhyma Castillo
These White Claw Surge 8% Hard Seltzer Flavors Sound Super Refreshing
By Lara Walsh
Stay up to date