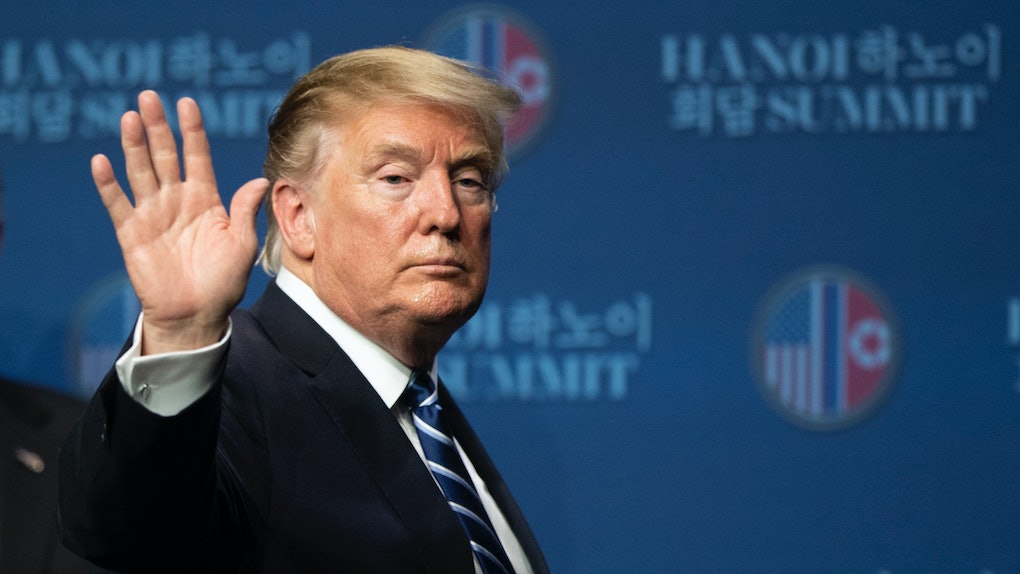 On Monday, Feb. 25, President Donald Trump departed the U.S., bound for Vietnam where he was scheduled to meet with North Korean Supreme Leader Kim Jong-un. In what was their second time meeting, the two world leaders were expected to continue their discussion of a nuclear agreement, and the world was watching to see how it went over. The answer? Apparently, not well. These tweets about Donald Trump's failure to make a deal with Kim Jong-un explain everything you need to know about what went down, and more specifically, what didn't.

The summit took place on Feb. 27, and it was the second time the world leaders held a one-on-one meeting to hash out the logistics and terms of a possible denuclearization deal. Trump made it clear he was still pushing for a plan to cease development of North Korea's nuclear arsenal, but it was less clear how he'd navigate those rough waters.

"Meeting for breakfast with our Nation's Governors - then off to Vietnam for a very important Summit with Kim Jong Un," Trump tweeted on Monday. "With complete Denuclearization, North Korea will rapidly become an Economic Powerhouse. Without it, just more of the same. Chairman Kim will make a wise decision!"

There was a lot on this line in this meeting, but it looks like he wasn't successful in making a deal with the North Korean leader. After the meeting with Kim, Trump held a press conference, in which he had stated he had to walk away from the situation. "Sometimes you have to walk," Trump said during the press conference. "This was just one of those times."

The sticking point, per Trump, was sanctions. The Guardian reported the Kim demanded full relief of sanctions on North Korea in exchange for the closure of one nuclear complex, while Trump was insistent that sanctions would only be lifted with the closure of all sites, including covert ones. In the meantime, both countries will keep on keeping on, with North Korea continuing to put a pause on nuclear and missile tests, and the United States avoiding joint military exercise with South Korea, per The Guardian.

On Twitter, people were reacting to the meeting between the two leaders on Tuesday and Trump's failure at making a nuclear deal with Kim. Let's just say, people didn't hold back since the hashtag #Trumpfail started surfacing all around the web. Elite Daily reached out to the White House for comment, but did not immediately hear back.

If the tension was palpable online, it's not hard to see why: the stakes were high going into the meeting.

Expectations in Washington were low as Trump is on his way to meet with Kim, even among top officials in the administration. Their first summit in June was a success by some measures, but underwhelming by others: Though the leaders agreed on some general goals, as Bloomberg points out, the specifics were iffy, and the lack of a full-fledged deal left some room for concern going into the second summit.

Trump, too, had sought to lower the bar for himself ahead of the meeting, saying he was "not in a rush" to push Kim to denuclearize. "I don't want to rush anybody, I just don't want testing," the president told governors gathered at the White House on Sunday, per the Associated Press. "As long as there's no testing, we're happy."

Going into the week, Senate Democrats urged Trump to pursue verifiable denuclearization, one of the key components of the "CVID" standard for denuclearization — which stands for complete, verifiable, and irreversible. Meanwhile, Kim, for his part, warned in his New Year's address that economic sanctions by the U.S. could derail their negotiations.

Politics can be ruthless, and clearly, so can Twitter.