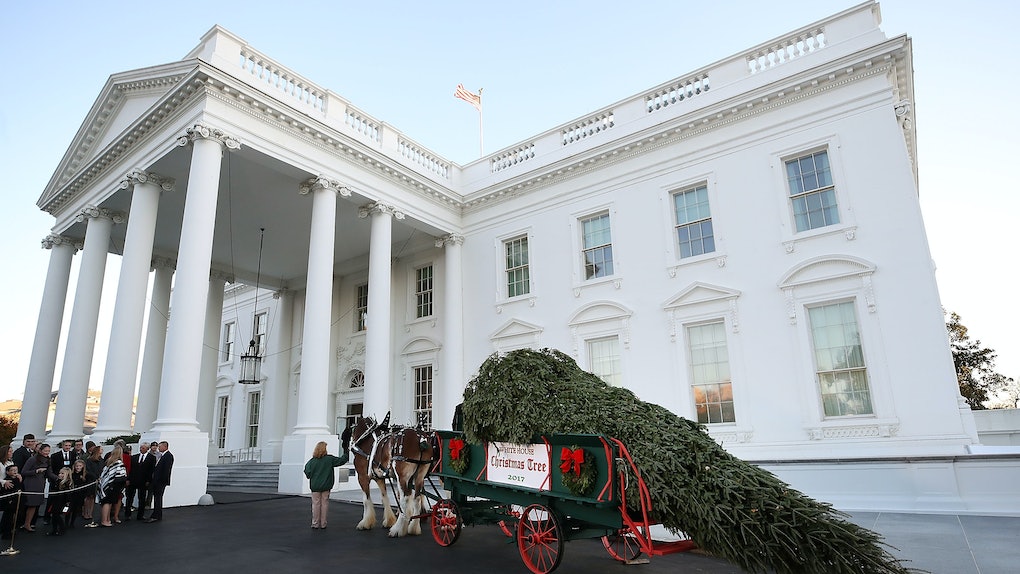 Trump’s Christmas MAGA Hat Is Double Price, Because The Holidays Are A Time To Give

Jesus, as they say, is the reason for the season. Which is why some people are puzzled by a Christmas-themed MAGA hat being sold by President Donald Trump. For the Trump supporter-slash-Christmas warrior in your life, you can buy a Christmas-themed "Make America Great Again" hat just in time for Dec. 25. Decked with colored lights and an all-caps "Merry Christmas" on the back, the hat costs $45 — almost double the price of regular MAGA hats, which sell for $25.

Part of Trump's online store, the Christmas-themed MAGA hat is one of several seasonal gifts available for purchase. The Trump store is also selling a $45 collective MAGA hat ornament, which is "finished in 24-karat gold." Similarly, the Trump store offered a $45 Jack-o-Lantern themed MAGA hat for Halloween, which was roasted for the eerie similarity to Trump's orange visage, but has, according to the store, sold out.

These Christmas-themed goods fall well in line with Trump's consistent promises to make sure the United States says "Merry Christmas" again (as opposed to more inclusive terms like "Happy Holidays"). Over the years, Trump has made what some have dubbed "the War on Christmas" a central theme of his anti-political correctness ethos.

At a campaign rally in 2015, per CNN, he said, "I'm a good Christian. If I become president, we're gonna be saying Merry Christmas at every store [...] You can leave happy holidays at the corner."

At a Dec. 2016 victory rally after he won the presidency, Trump repeated those sentiments; he also said of department stores, "I think they’re gonna start putting up ‘Merry Christmas.'"

His insistence upon saying "Merry Christmas" again has popped up several times during his administration, as well — most recently during a speech at the far-right Values Voter Summit. According to Time, Trump told the crowd,

We are stopping all our attacks on Judeo-Christian values. We don’t use the word Christmas because it’s not politically correct. You’ll go to department stores and they say ‘Happy New Year’ instead. [...] We’re saying Merry Christmas again! Our values will endure. Our nation will thrive. Our citizens will flourish, and our freedom will triumph.

It's clear that Trump is equating "Merry Christmas" (and his fight against what he has described as political correctness gone awry) with Judeo-Christian values.

But the other side of the War on Christmas argument Trump has been peddling is "Keep Christ in Christmas" — to keep the spirit of the holiday in the celebration.

And these hats are, according to some, not exactly Christ-like: doubling the price of foreign-made hats just in time for a holiday celebrating the birth of a man who was virulently anti-consumerism and who once said, If you want to be perfect, go, sell your possessions and give to the poor, and you will have treasure in heaven. Then come, follow me." In other words: you cannot be invested in material and money if you're going to follow him. Which means that Jesus probably would have frowned upon charging your followers $45 for a baseball hat.

Newsweek compiled several Bible passage examples to argue that Jesus himself would be strongly opposed to Trump's themed MAGA hats. They quote, for instance, 1 Timothy: "For the love of money is a root of all kinds of evil. Some people, eager for money, have wandered from the faith and pierced themselves with many griefs."

But Trump may be using dog-whistle politics to tap into his base. White evangelicals voted for Trump in droves according to the Pew Research Center (they were the ones he was addressing the first time he mentioned Christmas in 2015 and again most recently in October), and a majority of white Americans believe they face discrimination and even oppression, per NPR. (It's not a new sentiment: evangelical Christians have been claiming Christianity is under attack for at least a decade.)

And many conservatives also believe in the so-called "War on Christmas." For example, every year since at least 2015 people have become upset about the Starbucks holiday cup supposedly peddling a liberal agenda that prioritizes showing people of color, non-denominational holidays, and LGBT couples over overt displays of Christmas cheer.

So in that sense, maybe these MAGA hats are on the nose.

And one could argue that these expensive MAGA hats are taking advantage those who believe there is a War on Christmas and who would spend any amount of money to show that they will not be cowed.

But the hat is still, all in all, silly. At least if you take Twitter's word for it.

At the end of the day, regardless of motive, Trump's noble fight against the War on Christmas knows no bounds, especially if he stands to profit directly.