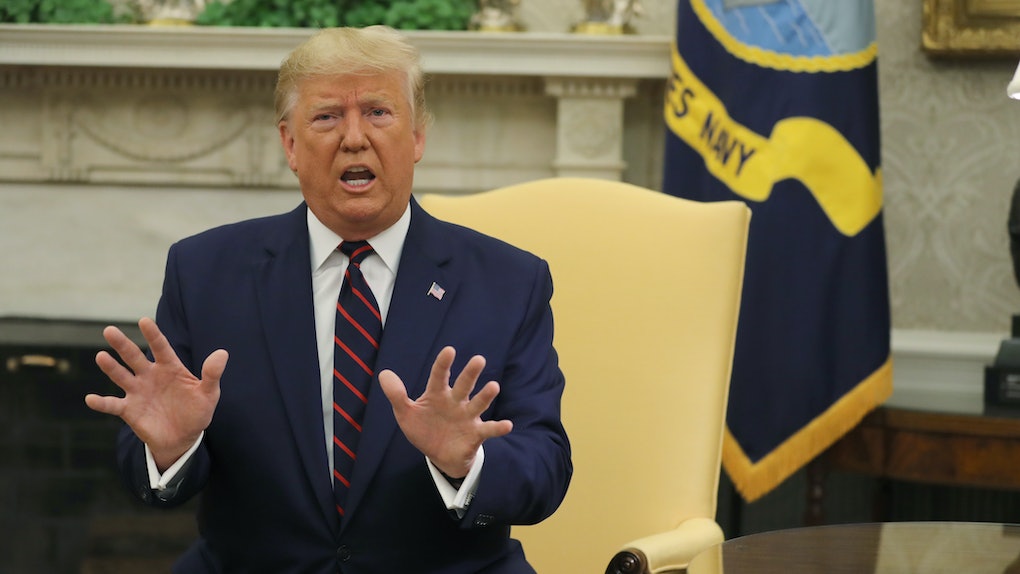 Trump Wanted An Alligator-Filled Border Moat, According To This Report

Even before he became president, Donald Trump notoriously made troubling remarks about immigrants in public. But according to a New York Times report published on Oct. 1, Trump's comments in private might be an even greater cause for concern. At one point, Trump reportedly wanted an alligator-filled border moat to deter migrants, and was frustrated when White House officials discouraged him. The White House did not immediately respond to Elite Daily's request for comment on the report. Wait, I'm sorry, is this real life? Or is this a bad James Bond knockoff?

In March, Trump met with White House advisers in the Oval Office to discuss immigration. During that meeting, Trump reportedly demanded that the border between the U.S. and Mexico be shut down by noon the next day, a threat he also reiterated publicly. The president's advisers were reportedly concerned about these demands, but it apparently wasn't the first time that Trump had called for something so extreme.

Before that March meeting, Trump reportedly proposed constructing a water-filled trench at the border, complete with snakes or alligators, per The New York Times report. The report also stated he even asked White House aides to look into how much that would cost. Trump also reportedly privately called for an electrified border wall, with spikes along the top that would be sharp enough to cut human skin. Elite Daily reached out to the White House for comment on the report, but did not immediately hear back.

Trump didn't stop there. On Nov. 1, 2018, Trump appeared to publicly suggest that soldiers stationed at the U.S.-Mexico border should shoot migrants if they threw rocks at them. "They want to throw rocks at our military, our military fights back," Trump said at the time. The White House did not previously respond to Elite Daily's request for comment on the remarks. He tried to walk back these comments, CNN later reported, after other administration officials warned him that such an action would be illegal. But in private, The New York Times reported that Trump allegedly suggested that soldiers at the border should shoot migrants in the legs to slow them down, which is, again, illegal. Elite Daily reached out to the White House for comment, but did not immediately hear back.

What is clear, however, is that Trump both privately and publicly wanted to put a stop to immigration across the southern border — or, at the very least, slow migrants down — and this apparently prompted concern from White House staff. According to The New York Times, Trump's call to fully shut down the 2,000-mile U.S.-Mexico border resulted in conflict with some top officials. Trump reportedly clashed with his then-Homeland Security Secretary Kirstjen Nielsen for not being tough enough on immigration, after she warned him that migrants could still seek asylum. Elite Daily has reached out to the White House for comment on the president's reported differences with his staff, but did not immediately hear back .

Not long afterward, Nielsen resigned in early April 2019, after meeting with the president. According to The New York Times, it was Trump who reportedly demanded Nielsen's resignation — and her staff had worked on her letter of resignation without her knowledge even before her decision to leave the administration.

When Trump was running for president, he drew widespread criticism for making offensive, generalized statements about immigrants. One of the key tenets of his platform was a call for a border wall between the U.S. and Mexico. After he was elected, Trump simply doubled down on his desire to limit immigration to the U.S. — and his comments in private once again confirm that Trump is clearly, not concerned about criticism, or really anything, when it comes to the southern border.