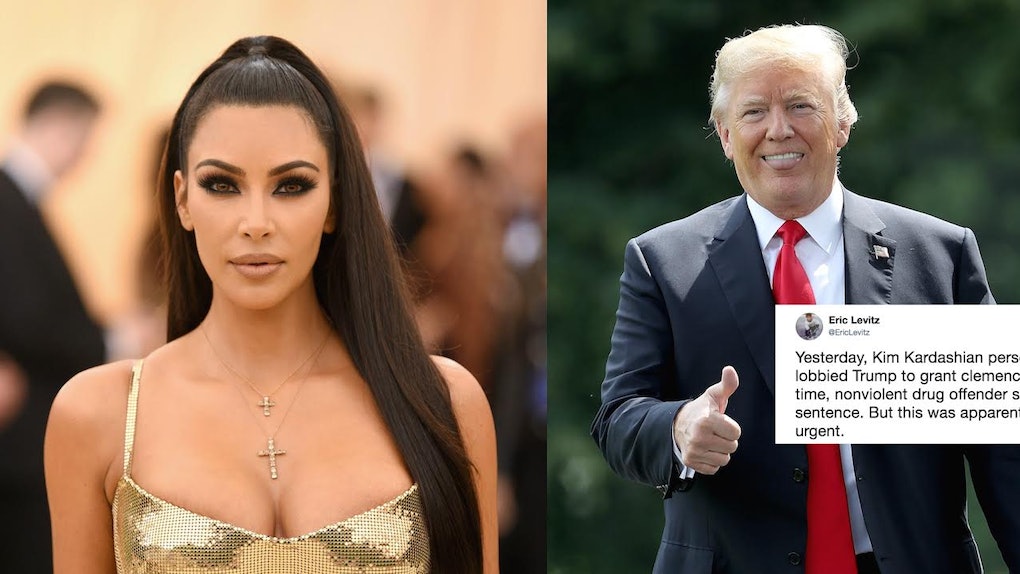 On Wednesday, May 30, Kim Kardashian went to the White House to campaign for the early release of Alice Marie Johnson, a 63-year-old woman serving a life sentence in federal prison for a drug-related crime committed over two decades ago. The next day, the president indeed announced plans for a pardon, just for someone else. On Thursday, Trump pardoned Dinesh D'Souza, the right-wing figure famous for his frequent appearances on Fox News and his reputation for being a provocative political commentator.

The president announced his plans in a tweet, which read, "Will be giving a Full Pardon to Dinesh D’Souza today. He was treated very unfairly by our government!"

By choosing to pardon D'Souza, who plead guilty in 2014 to violating campaign finance laws, Trump painted a picture of ultimate irony. A day after both Kardashian and his son-in-law, White House adviser Jared Kushner, met in the Oval Office to talk about prison justice reform and Johnson, the president pardoned a supporter of his who never went to prison.

Elite Daily reached out to the White House for comment on whether the pardon of D'Souza was in any way related to Trump's meeting with Kardashian, and whether or not there were plans to offer clemency to Johnson. At the time of writing, the White House did not respond.

The irony was not lost on people on Twitter, and many reacted accordingly, by either mocking Kardashian's meeting at the White House or simply pointing out the timing.

"Not sure this is what Kim Kardashian had in mind when she visited the WH yesterday," tweeted Lynn Comella, an author and professor at the University of Nevada-Las Vegas.

Leah Litman, a professor at UCLA, went in the opposite direction of mocking Kardashian. "I'm not willing to blame this latest travesty on @KimKardashian," Litman tweeted on Thursday. "I think that says something bad about the person we elected as POTUS."

Kardashian's meeting with President Trump had been months in the making. In April, Axios reported that the reality TV star had held multiple phone calls with Kushner over a period of months, all the while discussing criminal justice reform and the possibility of an expedited release for Johnson.

Johnson's story had been gaining an increasing amount of attention in the press when Kardashian noticed the story on Mic in October 2017. The following month, Kardashian began consulting with her lawyer to explore options for aiding Johnson earn a release. On Wednesday, Kardashian's efforts to help the 63-year-old woman landed her a meeting in the West Wing.

“It was very general,” Brittany Barnett, a legal representative of Johnson's, said about the meeting, according to The New York Times. “We just don’t know, but it seems like the meeting was positive, and it is in President Trump’s hands now as to what he decides to do.”

Following the visit in Washington D.C., Kardashian took to Twitter to express her hope for positive outcome.

"I would like to thank President Trump for his time this afternoon," she tweeted. "It is our hope that the President will grant clemency to Ms. Alice Marie Johnson who is serving a life sentence for a first-time, non-violent drug offense."

It's unclear in which the direction Trump is leaning on whether or not to fulfill that hope. In the meantime, D'Souza gets a pardon.