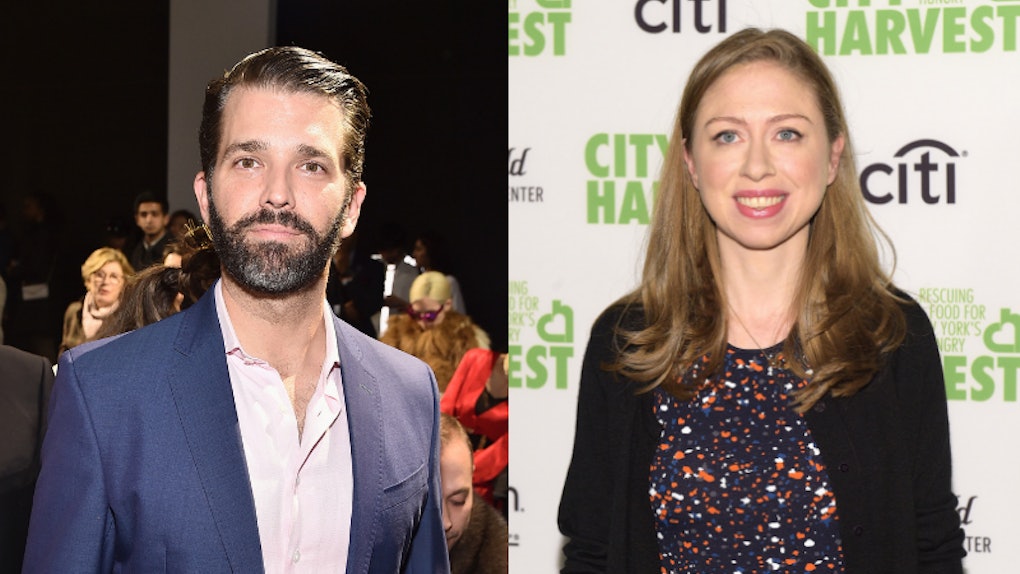 Donald Trump Jr. is speaking out in support of Chelsea Clinton in the aftermath of two deadly shootings at mosques in Christchurch, New Zealand. While the Clintons and Trumps haven't exactly seen eye to eye on many issues in the past, the businessman took to Twitter to air his thoughts after video footage surfaced of a New York University student accused the former first daughter of inciting Islamophobia. Trump Jr.'s response to people blaming Chelsea Clinton for the New Zealand attack was supportive, and it turned the focus back on stopping hatred.

On Friday, March 15, Clinton incited backlash when she attended a vigil at New York University just hours after a white nationalist entered two mosques and started shooting at the worshippers with a semiautomatic rifle and shotgun. Per reports, the gunman killed at least 49 people and injured many others during the massacre. Emotions were running high after the deadly incident, and a Twitter user captured the moment that a NYU student confronted Clinton at the vigil for the victims and appeared to blame her for the incident, saying that the shooting was fueled by "the rhetoric you put out there."

It was a lot of blame to put on someone, and Donald Trump Jr. took to Twitter on Saturday, March 16 to voice his support for the former first daughter while reminding people that no form of hate is OK.

He began, "It’s sickening to see people blame @ChelseaClinton for the NZ attacks because she spoke out against anti-Semitism."

"We should all be condemning anti-Semitism & all forms of hate," he continued. "Chelsea should be praised for speaking up. Anyone who doesn’t understand this is part of the problem."

Clinton has yet to publicly respond to Trump's tweet, but she took to Twitter shortly after the attack to share her condolences for the Muslim community and all those impacted by the tragedy.

Heartbroken & horrified by the white nationalist terrorist attack during Jummah on the mosques and Muslim community in Christchurch. Keeping all affected by this tragedy in my heart and prayers. We need a global response to the global threat of violent white nationalism.

Several students at the vigil were calling out Clinton over a Twitter exchange she had with Rep. Ilhan Omar back in February. At the time, the author wrote, "We should expect all elected officials, regardless of party, and all public figures to not traffic in anti-Semitism" in response to controversial comments the elected official made about Israel and Jews. Omar tweeted out an apology for her controversial tweet on Feb. 11, and Clinton and Omar exchanged tweets planning to come together for an in-person dialogue.

Clinton later apologized for her statement, but one student seemingly brought up the tweet while confronting her at the gathering, saying:

This right here is the result of a massacre stoked by people like you and the words that you put into the world. And I want you to know that and I want you to feel that deeply – 49 people died because of the rhetoric you put out there.

Clinton responded, "I’m so sorry you feel that way. That was certainly never my intention. I do believe words matter, I do believe we have to show solidarity." At the time, Elite Daily reached out to Clinton's team for further comment, but did not hear back.

Later, on March 15, the purported individual in the video added in a tweet, "[I] can’t believe this has to be said, but [I] didn’t tell [C]helsea [C]linton she was the one who put a gun to [M]uslims’ heads."

While reactions to the video were mixed, I think it's safe to say that the gunman, not Clinton, was responsible for the terrorist attack. Tensions may be running high, but Trump Jr.'s tweet is a reminder for us to focus on the real issue at hand — In this case, hatred and white nationalism — without assigning blame.