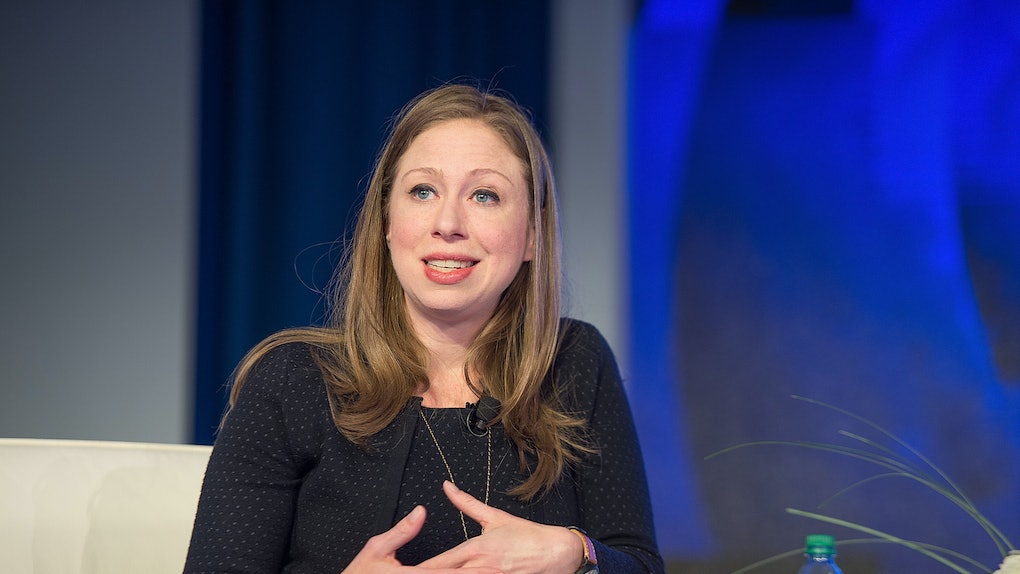 In the wake of a deadly attack on two mosques in Christchurch, New Zealand, many have named Islamophobia as the motivating factor in the massacre — and they've been calling out those who have apparently been hostile toward Muslims. Among those facing backlash is former first daughter Chelsea Clinton. However, the situation isn't as heated as it might sound. Chelsea Clinton's response to a confrontation at NYU was understanding.

Following the March 15 shooting, which claimed the lives of at least 49 people, Clinton attended a vigil at New York University on Friday evening to honor the victims, per Business Insider. However, some people apparently weren't too thrilled to see her there. At one point, a student activist confronted Clinton, saying:

This right here is the result of a massacre stoked by people like you and the words that you put into the world. And I want you to know that and I want you to feel that deeply – 49 people died because of the rhetoric you put out there.

“I’m so sorry you feel that way,” Clinton, who is pregnant with her third child, responded. "That was certainly never my intention. I do believe words matter, I do believe we have to show solidarity." At that point, other students chimed in on the criticism, but then video of the incident cuts so it's unclear whether she offered up an additional response.

Elite Daily reached out to representatives for Clinton for comment on the confrontation, but did not hear back by the time of publication.

I don't know about you, but it seems like Clinton was sincere with her apology to the student who was likely referring to Clinton's tweets about Rep. Ilhan Omar back in February 2019. Shortly after the shooting made headlines on Friday, March 15, Clinton took to Twitter to call out white nationalism and pay her respects to the victims, writing:

Heartbroken & horrified by the white nationalist terrorist attack during Jummah on the mosques and Muslim community in Christchurch. Keeping all affected by this tragedy in my heart and prayers. We need a global response to the global threat of violent white nationalism.

But apparently her words have hurt others. It seems as though the activist was criticizing Clinton over her comments about Rep. Ilhan Omar (D-Minnesota), who faced widespread backlash in February for making what people have said are anti-Semitic comments. Omar's comments included a suggestion that U.S. politicians' support of Israel is fueled by donations from the American Israel Public Affairs Committee (AIPAC), a prominent pro-Israel group, which people say spreads tropes about Jewish money and political influence. Representatives for Omar did not return Elite Daily's previous requests for comment, but she later shared a statement on Twitter saying she "unequivocally apologize[d]."

“We should expect all elected officials, regardless of party, and all public figures to not traffic in anti-Semitism,” Clinton tweeted on Feb. 10.

After Clinton's tweet, political organizer Melissa Byrne called her out for not reaching out to Omar personally to which Clinton responded that she would. The next day, following Omar's apology for those remarks, Clinton tweeted that she was "looking forward to learning from [her] and with [her], and to [their] conversation about anti-Semitism, Islamophobia, racism, xenophobia, allyship, bad-faith attacks & more."

After the March 15 video surfaced, people came out on both sides of the issue, and the purported individual in the video added in a tweet, "[I] can’t believe this has to be said, but [I] didn’t tell [C]helsea [C]linton she was the one who put a gun to [M]uslims’ heads."

Tensions are definitely high, considering the weight of this tragedy. But it's really a time for healing and helping the victims. If that sounds like something you can get on board with, check out these ways to help the victims of the Christchurch tragedy.