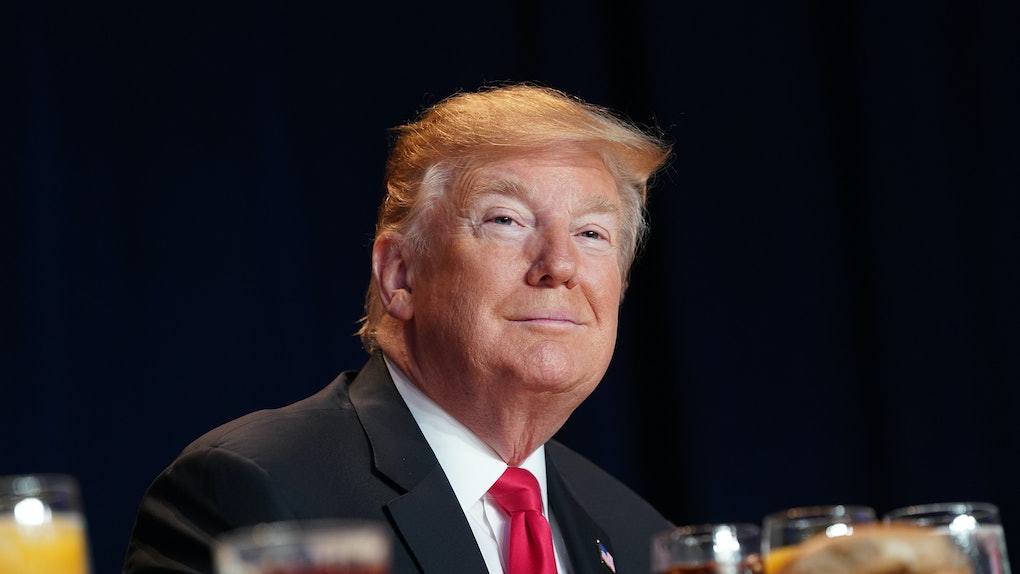 Trump Has A VR Golf Simulator At The White House So He Can Play Anytime, Reports Say

Even the leader of the free world needs a hobby and President Donald Trump's is apparently golf. Even with a country to run, the president can always find the time to hit the links — at least virtual ones. According to a Feb. 11 report by The Washington Post, Trump has a golf simulator at the White House so he can play anytime. So, he doesn't have to worry about making tee time now that the government's back to work.

Virtual reality games are popular enough that they've apparently made it to the White House. Sources told The Washington Post that the president installed a "room-sized" golf simulator at the White House that allows him to play on golf courses across the world without ever leaving Washington, D.C. The new system — which replaced an older and less sophisticated system that President Barack Obama had while in office — was reportedly installed over the last few weeks and the president paid the $50,000 it costs out of pocket. Elite Daily reached out to the White House for confirmation on reports of the new simulator, but did not immediately hear back.

Finding when Trump has time to play virtual golf is a whole other story. Recently, Axios got hold of Trump's leaked private schedules over the course of a three-month period, from Nov. 7, 2018 to Feb. 1, 2019, and found that around 60 percent of the president's schedule was blocked off for "executive time." White House aides have said that time is used for impromptu meetings, tweeting, or watching television, according to The Washington Post. A White House official told the publication that the president does not use his simulator during "executive time." Elite Daily reached out to the White House for comment on whether the simulator has been used during "executive time," but did not immediately hear back.

During the 2016 presidential campaign trail, Trump said, "I'm going to be working for you. I'm not going to have time to go play golf," according to CNN. However, since being elected, number 45 has been criticized for his golfing habits. Trump Golf Count, a site devoted specifically to tracking Trump's golfing habits, reported that as of Feb. 13, 2019, the president has made 156 visits to golf courses in the two years since his inauguration, for an estimated taxypayer cost of $87 million. The White House did not immediately respond to Elite Daily's request for comment on the subject. Comparatively, Obama played 333 rounds of golf over the course of his eight years as president, according to CNN.

Between 2011 and 2016, Trump tweeted about Obama's golf habits 27 times, according to SBNation. Just before the 2016 election, during his final campaign trail appearance in New Hampshire, Trump said Obama's "played more golf than most people on the PGA Tour," according to CNN. Trump said,

I mean he's played more golf than most people on the PGA Tour, this guy. What is it, over 300 rounds? Hey, look, it's good. Golf is fine. But always play with leaders of countries and people that can help us! Don't play with your friends all the time.

I guess presidents just really love golf, and some presidents love it more than others. Then some others love it enough to tell other presidents how much they love it while also loving it.