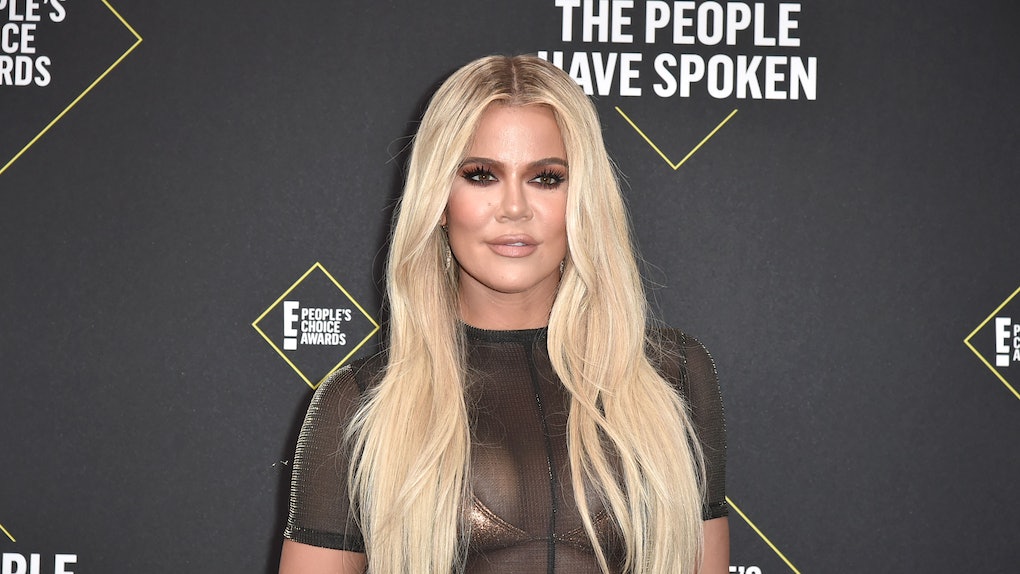 Tristan Thompson's Comment Calling Khloé Kardashian "Perfection" Is Too Much

For reasons literally no one can fathom, Tristan Thompson continues to do the most when publicly praising his ex Khloé Kardashian. Coming shortly after he referred to the mother of his child as a "beautiful [diamond]" and shared a pretty cringe-worthy tribute to her People's Choice Awards win on social media, the basketball player continued to take the flirting up a notch while thirsting over one of Koko's latest IG photos. Fans are scratching their heads over Tristan Thompson's comment calling Khloé Kardashian "perfection," because it doesn't seem like the dude is taking a hint.

If you've been keeping up with the pair's relationship since their split following reports of infidelity on Thompson's part, you know that he can't stop won't stop commenting on his ex's Instagram posts. While I was definitely giving him some virtual side eye when he took to social media to share an over-the-top birthday message back in June, things have definitely taken an uncomfortably flirty turn since then.

The Cleveland Cavaliers player slid into the comments section of Kardashian's latest Instagram post with what can only be described as a thirsty AF comment. Kardashian took to the social media platform on Wednesday, Nov. 27, to share a promo photo of her modeling a white high-neck bodysuit from her Good American line. Thompson, one of the hundreds who took to the comments section to compliment the Keeping Up With the Kardashians star, made his ~feelings~ known as he wrote, "WOW! PERFECTION! WOW."

Now, I'm not disagreeing with Thompson's assessment at all, but judging from the responses, confused fans are wondering, "Tristan, WYD?" While Koko has yet to respond to any of Thompson's comments (she doesn't even follow him back on Instagram), that didn't stop him from recently sharing a post where he applauded Kardashian for being recognized as the best reality star during this year's PCA. Alongside a collage of the star from the event, he wrote, "Wow wow wow @khloekardashian. Congrats Momma Koko on winning best reality star 2019, that’s two years in a row. Two time champ. I love the sound of that. So proud of all you have accomplished this year."

He continued, "Revenge body is something that always stands out to me, you challenge people to fight for a better YOU. It’s more about what in life really gives us true happiness and is holding us back from achieving that. True and Myself are so proud of you and the sisters for everything last night. Y’all are truly role models to our younger generation. Keep leading with love and happiness. You go girl!!! *martin voice.*"

Again, Kardashian has yet to publicly acknowledge Thompson's posts and comments, so I wouldn't take his recent social media activity to mean that there's anything romantic going on between the two. From the sound of things, they're focused on co-parenting True as amicably as possible, and I wouldn't be surprised if we see more of the athlete on-screen (and on Instagram) as the Kardashians gear up for the holidays.