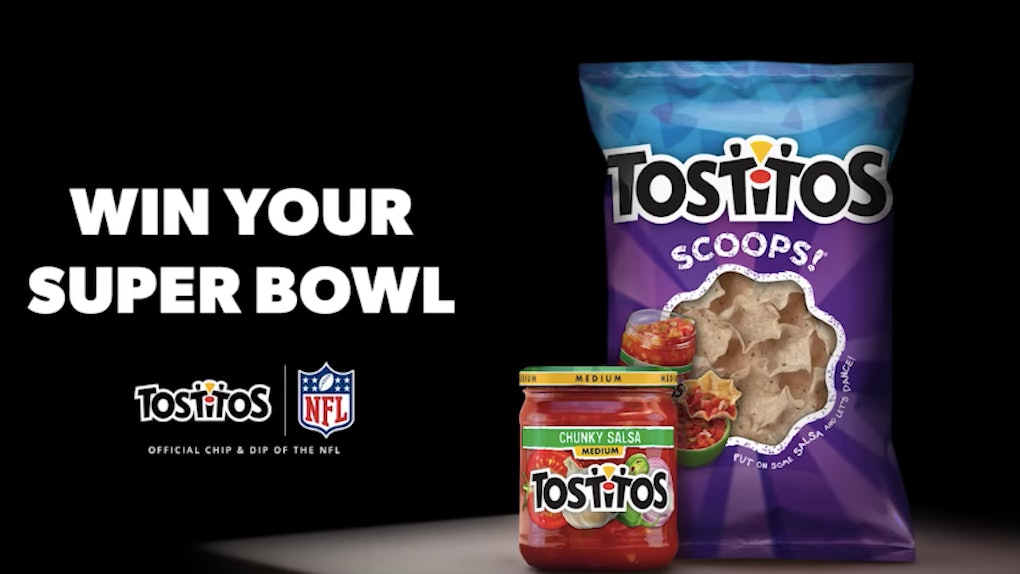 You could livestream quite literally anything in the world, and people would still probably still get excited about it. Whether it's something as beautiful as the birth of a baby giraffe at at a zoo, or if it's — say — as random as a bowl of tortilla chips, people would still manage to get totally pumped up. And speaking of live-streaming a bowl of tortilla chips, Tostitos' world record livestream for the 2019 Super Bowl is about to rock the big game far more than a win from either team. As a completely food-focused Super Bowl party attendee, I am beyond pumped.

Move over Super Bowl — Tostitos is going to livestream a tortilla chip bowl for a record-breaking amount of time straight out of Atlanta, Georgia (which is where the Super Bowl is being held this year, for my fellow non-footballers). According to the press release, the chip company will be setting the unofficial world record for the longest livestream of a tortilla chip bowl, which will last an entire 53 consecutive hours to honor of the 53rd Super Bowl ever. It's going to require an unbelievable amount of dedication, and TBH I don't plan on watching it in its entirety, but I can definitely appreciate the relentless commitment to the joke. The livestream will start at 1:29 p.m. ET on Friday, Jan. 31, and will last until one minute before kickoff, at 6:29 p.m. ET on Sunday, Feb. 3. So, get your game face on.

The best part of it all is that Tostitos will be live-streaming fans — as well as various NFL stars — as they dip their beloved tortilla chips. That's right — according to the press release, Tostitos will be inviting current and former players to the chip dipping bowl, such as Barry Sanders, Dak Prescott, Matt Ryan, Baker Mayfield, and Tony Gonzalez. The bowl will be regularly refilled throughout the 53 hours, so everyone is sure to get their hand on a chip, and a number of Tostitos flavors are also able to be requested. Hint of lime for me, please!

It looks like this shindig is going to be pretty organized, though, as there are a ton of rules to the livestream. For example, if there are at least 53 comments using the hashtag #TostitosLiveBowl, they'll bring out Queso Blanco for dipping, according to the press release. The 53rd person to comment with the hashtag will win a jar of Queso, and if they end up receiving 53 million comments (bc everyone should try and shoot for the stars, right?) using the hashtag #TostitosLiveBowl, the 53-millionth commenter will win an entire 53 bags of Tostitos. That's enough to last at least a few weeks, isn't it?

In the press release, Sheldon Boyea, the Senior Director of Marketing at Tostitos, said that regardless of your Super Bowl traditions (which now may include watching a snack livestream), Tostitos are a totally classic part of it all.

According to the press release, Boyea said:

For every kind of fan embodies the notion that while we all have different teams, favorite players, different pre-game parties and routines — such as watching a 53-hour livestream of a tortilla chip bowl — we can all agree that Tostitos is essential to any game day get-together. Our variety of chip & dip offerings fits virtually any fan’s game day snacking desire.

I don't know about you, but all of this hype is getting me hella ready for Super Bowl Sunday. I'm not sure if it's merely getting me excited to eat lots of tortilla chips or if it's actually getting me riled up, but either way, it's going to be great. So, happy munching, and hopefully I'll be seeing you on the livestream.