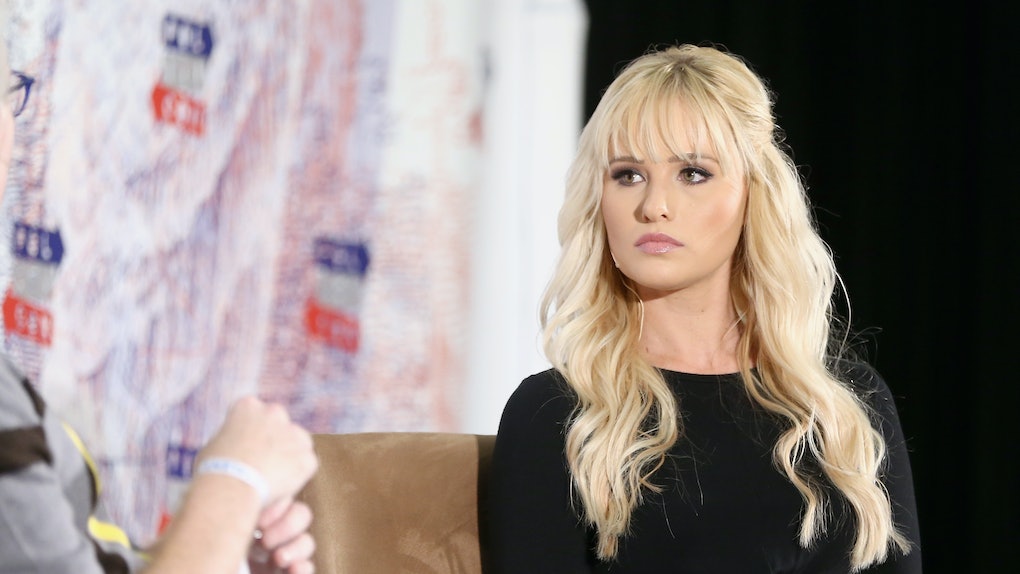 Tomi Lahren's Tweet About JAY-Z & The NFL Slammed Them Both

Does anyone else feel like the 2019 Super Bowl just happened? Well, apparently the National Football League (NFL) is already planning its next halftime show, and sitting down with one of their top choices for the February 2020 event. Nearly everyone is excited to hear who will perform, except one, because Tomi Lahren's tweet about JAY-Z and the NFL slams them both.

On Tuesday, Aug. 13, FOX News contributor Tomi Lahren took to Twitter to slam rapper JAY-Z for reportedly speaking to the NFL about possibly working on the 2020 Super Bowl halftime show. In the tweet, Lahren called the artist a "former drug dealer" and implied that the NFL "hates America and law enforcement officers." Lahren wrote,

Jay-Z will be consulting with the NFL for the Super Bowl halftime show and other performances because apparently the league doesn’t hate America and law enforcement officers at a level satisfactory enough for the former drug dealer.

Roc Nation, which is owned by JAY-Z, and the NFL did not immediately respond to Elite Daily's request for comment about the partnership or Lahren's criticism.

The NFL shared an announcement on Aug. 13 that stated the league would be partnering with JAY-Z and his record label Roc Nation to work on future live performances and also incorporate more social justice efforts into the organization. A part of the announcement read,

Roc Nation, the entertainment company founded by rapper and businessman Shawn "Jay-Z" Carter, is entering into a multiyear partnership with the NFL to enhance the NFL's live game experiences and to amplify the league's social justice efforts.

This is not, however, JAY-Z's first foray into dealing with sports. The artist has been an outspoken supporter of former San Francisco 49ers quarterback Colin Kaepernick, who drew controversy for his protests against racial discrimination and police brutality during the national anthem. Kaepernick's protest, which started in 2016 and involved kneeling instead of standing during the anthem, inspired other athletes to follow suit and kick-started a controversy around patriotism and free speech. Kaepernick left the 49ers in 2017 and has been a free agent since. JAY-Z has previously turned down invitations to perform at the Super Bowl halftime show per USA Today, but it looks like as of 2019, he might be trying to work something out with the NFL.

JAY-Z, who is one of the most influential and success artists in the rap music industry, currently runs his own fashion brand, record label, and talent agency, making his estimated net worth $500 million, according to Business Insider. He has also been open about his past dealing drugs while growing up in Brooklyn, New York, neighborhood Bedford-Stuyvesant, prior to his success. In November 2013, he sat down with Vanity Fair and discussed his rise to fame, as well as his desire to get involved in sports, actively citing his past dealing drugs. "I really want to help these athletes," he told the publication. "Do you know how many athletes go broke three years after they stop playing? I want to help them hold on to their money. I mean, I know about budgets. I was a drug dealer.”

Of course, there's been no confirmation from the NFL or JAY-Z as to whether the rapper will be gracing the 2020 Super Bowl halftime stage, but I can hope. However, now that these two are working together, I have no doubt that we're in for a spectacular show next year. I may not be the biggest football fan, but I'm already looking forward to the game.

More like this
Here's Why EXO's BAEKHYUN, CHANGMO, & Raiden's "Runner" Is The Perfect T1 Theme Song – EXCLUSIVE
By Michele Mendez
Cardi B's Quotes About The Racial Pay Gap In The Entertainment Industry Needed To Be Said
By Brandy Robidoux
Justin Bieber's Response To Criticism For Including An MLK Speech On 'Justice' Is Open-Minded
By Brandy Robidoux
Stay up to date