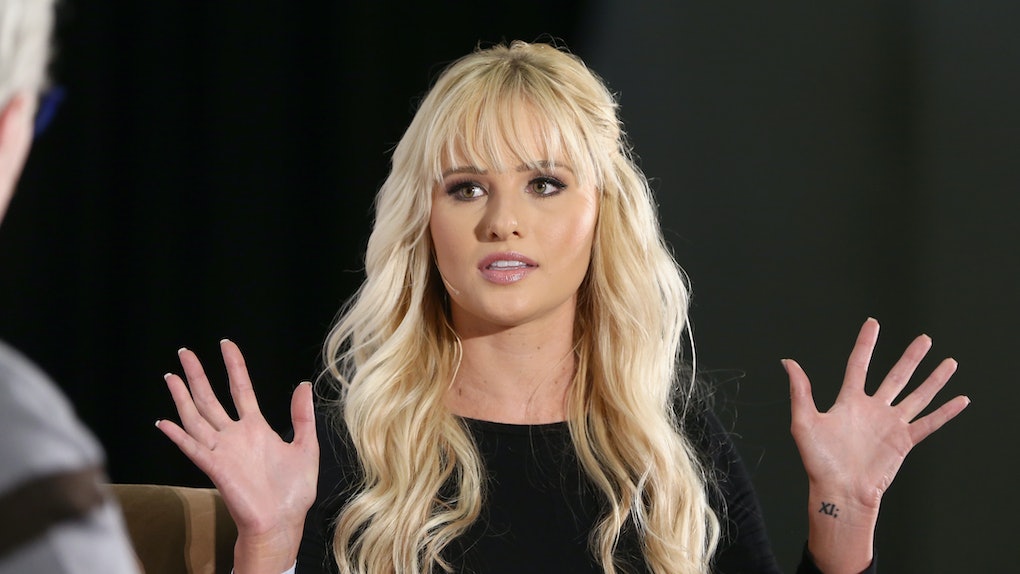 Tomi Lahren's Tweet About Her Ancestors "Discovering" America Is Getting Dragged

It may be a new year, but some things never change. Its not uncommon for a certain controversial television figure to cause a stir with her controversial tweets, but Tomi Lahren's tweet about her ancestors "discovering" America might be the most ludicrous one yet. Never fear, it looks like a member of rap royalty is calling her out for it.

On Monday, Feb. 4, conservative television personality Tomi Lahren took to Twitter to bring up rapper 21 Savage being arrested by the U.S. Immigration and Customs Enforcement (ICE) on Sunday, Feb. 3 in Atlanta, Georgia due to him allegedly being in the United States on an expired visa. Representatives of the rapper did not immediately respond to Elite Daily's request for comment. Well, following this news, Lahren took to social media to share a taunting message directed to the rapper, which got criticized by entertainers such as Cardi B and Nicki Minaj. In response to Lahren's tweet, Minaj blasted the television figure for her comment, and taunting those being deported "as if [her] ancestors discovered America," per Minaj's tweet. Lahren's response? Well, it's out there to say the least.

In response to Minaj's tweet, Lahren defended ICE arresting 21 Savage and proceeded to claim that her ancestors "did discover America," despite the fact that Lahren does not appear to have Native American heritage, and, you know, you can't "discover" a place where people are already living. Representatives for Lahren did not immediately respond to Elite Daily's request for comment.

Don't believe me? Just see for yourself.

Following Lahren's tweet, numerous people on Twitter started calling the FOX News contributor out for her bold claim, particularly that you can't "discover" a land when other people are already living on it.

Lahren certainly hasn't been shy about expressing her anti-immigration viewpoints and opinions, and has led the public to call her out for her comments on immigration, and the contributor has even be trolled for her own genealogical history. The thing is, Lahren claiming that her European ancestors "discovered America" disregards the entire Native American population, who have historically been overlooked throughout United States history. Despite the myth that Italian explorer Christopher Columbus "discovered" America, that's hardly the case. Columbus reached United States' soil in 1492, and according to CNN indigenous people had been living on that land centuries prior to his arrival. Plus, Columbus wasn't even the first European to travel to America, seeing as Leif Eriksson and other Vikings had visited the land five centuries earlier. Not that it matters, because — again — you can't discover a place where other people are living.

So, given that, per The Hill, Lahren is German and Norwegian, it's safe to say that her ancestors probably didn't "discover" America.

Minaj isn't the first entertainment figure to go head to head with Lahren over social media lately. In January, rapper Cardi B shared an (iconic) Instagram video discussing the government shutdown, particularly President Donald Trump's order that federal workers were to return to work. The video received nearly 20 million views, and went viral across numerous webpages. However, Lahren didn't seem to enjoy the video as much as the rest of us, especially since she criticized Cardi B for endorsing Democrats. Well, in true Cardi B fashion, the Bronx native decided to follow up with Lahren's remarks with a straight to the point threat.

Eventually, the rapper did end up expanding on the issue more, claiming that Lahren is "blinded with hate" and a "sheep."

That Twitter feud was definitely one for the books, but it looks like this beef is far from over. Following Lahren's tweet about 21 Savage's arrest, Cardi B tweeted at the contributor with a comment that truly brings this whole ordeal full circle.

Safe to say, it doesn't look like Lahren will be attending any Nicki Minaj or Cardi B concerts anytime soon. I guess you'll have to stick to the radio, Tomi.

More like this
These Tweets & Memes About Matt Gaetz's Venmo All Make The Same Joke
By Cianna Garrison
The Best "Just Because You're Vaccinated" Memes With Iconic Pop Culture References
By Lara Walsh
Can You Put Emojis In Your TikTok Username? There's A Catch
By Lara Walsh
Stay up to date