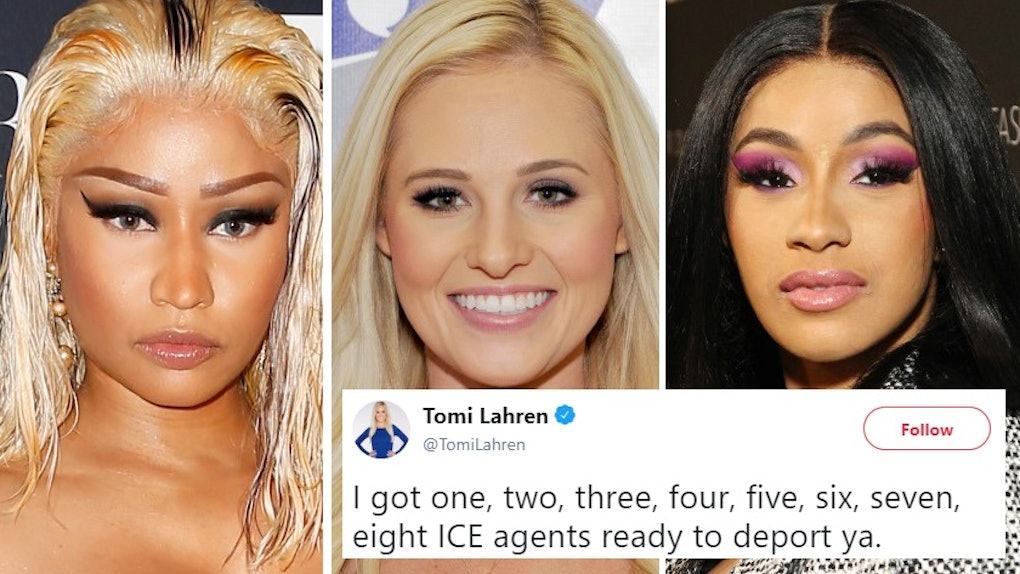 Cardi B and Nicki Minaj may have a long and complicated history thanks to their ongoing feud, but there’s one thing that they seem to agree on: that deportation isn’t a joke. On Sunday, Feb. 3, news broke that 21 Savage had reportedly been arrested for allegedly overstaying his visa. Elite Daily reached out to 21 Savage's team for comment on the arrest, but did not hear back by the time of publication. When political commentator Tomi Lahren joked on Twitter about his possible deportation, Cardi and Minaj both responded with tweets of their own. In their responses, it was clear that Minaj and Cardi didn’t take Lahren’s insensitive commentary on the situation lightly. Overall, Tomi Lahren’s joke about 21 Savage facing deportation didn’t go over well with many folks, especially Minaj and Cardi.

“I got one, two, three, four, five, six, seven, eight ICE agents ready to deport ya,” Lahren wrote in a tweet quoting an article about 21 Savage’s possible deportation.

Lahren’s tweet was clearly a riff on 21 Savage’s song “Bank Account” in which he raps, “I got one, two, three, four, five, six, seven, eight M's in my bank account, yeah.”

Lahren received quite a bit of backlash from Twitter for tweeting such an insensitive joke. Surprisingly, Cardi and Minaj responded to Lahren’s tweet with some heavy criticism and ultimately showed that, despite their history of beefing, they are united on this front, at least.

“Don’t make me get my leash,” Cardi said in a tweet quoting Lahren’s joke. Her response was in reference to an exchange she had with Lahren just a few weeks ago during which the rapper said she would “dog walk” Lahren.

In response, Lahren explained that she was a fan of Cardi’s and of 21 Savage.

“Here’s something maybe we can agree on, our immigration system is broken,” Lahren wrote. “We need to keep our country safe while also making sure people who work hard, contribute and don’t leech off the system are able to LEGALLY immigrate here. I’m a fan of @21savage and I’m a fan of yours.”

Minaj took a more serious approach, chastising Lahren for tweeting the joke and insinuating that she craved attention.

“Your obsession w/our culture is scary to say the least,” Minaj tweeted. “I hate giving you the attention you so desperately crave. Laughing @ ppl getting deported as if your ancestors discovered America. Are you Native American? You fkn clown.”

Minaj’s tweet didn’t seem to bother Lahren at all and she responded just as strongly, even claiming that her ancestors did, in fact, “discover America.”

“When you’re in the country illegally, you get deported,” Lahren wrote. “I didn’t write the law and neither did ICE. They enforce it. I hope @21savage is able to get an entertainment visa or become a citizen one day. P.S. My ancestors did discover America.”

Although Cardi and Minaj didn't respond to Lahren, Twitter did not let Lahren's insinuation that her ancestors discovered America slide, dragging her in the replies.

21 Savage, whose real name is Shayaa Bin Abraham-Joseph, was arrested on Sunday, Feb. 3 by U.S. Immigration and Customs Enforcement (ICE) and could face deportation. In a statement to E! News, the rapper’s lawyer Dina LaPolt explained that she was working to “clear up any misunderstandings.”

"We are working diligently to get Mr. Abraham-Joseph out of detention while we work with the authorities to clear up any misunderstandings,” LaPolt wrote. “Mr. Abraham-Joseph is a role model to the young people in this country, especially in Atlanta, Georgia, and is actively working in the community-leading programs to help underprivileged youths in financial literacy."

So, this is a complicated issue and definitely not something to joke about, regardless of what people may think of current border security standards. With any luck, 21 Savage can get this all cleared up as soon as possible!