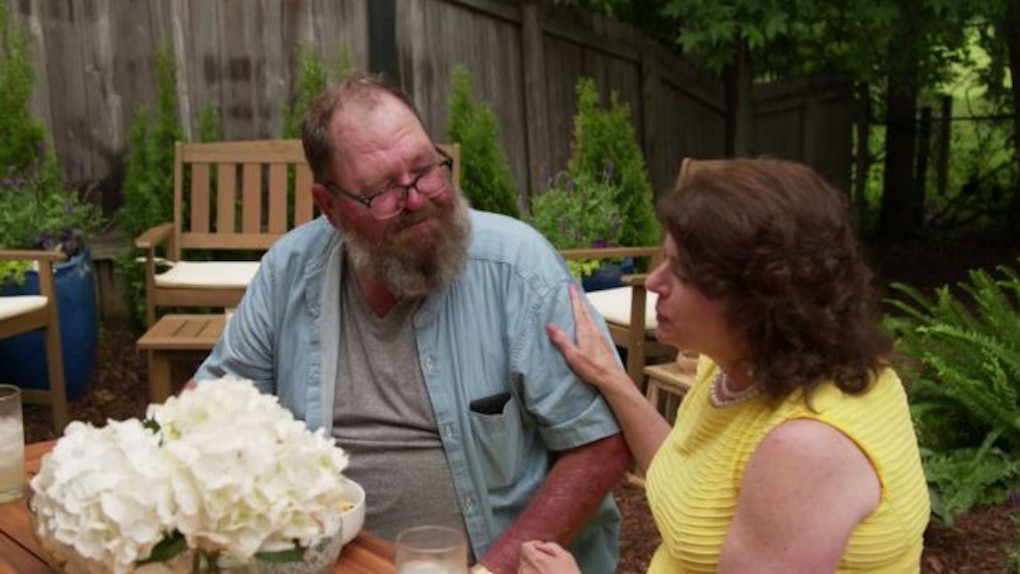 Queer Eye for the Straight Guy/Netflix

For those of us hoping for 2018 to be the light at the end of the tunnel that was 2017, that unfortunately has not panned out to be the case. That being said, 2018 has given us one precious gift: Netflix's reboot of 2003's Queer Eye. In the show's pilot episode, they give a man named Tom Jackson, a self-described "dumb old country boy from Kentucky," a total life makeover. Despite his fondness for jorts and passion for watching TV from outside while he smoked cigarettes, people loved Tom. Why? Because Tom and Abbey from Queer Eye have an incredibly beautiful love story. And because Tom is literally the most adorable man ever.

On the show, we learn that Tom hasn't had a whole lot of luck with love. In fact, he explained with a laugh in the beginning of his episode: "I think I'm unlucky in love because I'm butt ugly." (TOM, NO!) We also learn he's been married and divorced three times and still keeps in touch with his most recent ex, Abbey. "I see my ex wife Abbey every now and then," he shared on the show. "We're still friends and I want her to be excited about the new me."

Throughout the episode, Tom continued to make his feelings for Abbey clear by casually saying things like "Well, I love Abbey more than anything, I want to spend the rest of my life with her." More. Than. Anything. Ugh, so cute. And Abbey has feelings for him, too! "She says she loves me, I know I love her," Tom continued. "You'll have to ask her why she's not with me."

On the episode, after his literally incredible makeover, Tom invited Abbey to his car show on Friday and — get this — she agreed to go! Her going to this car show was a pretty big deal because she was finally going to see the new, made-over version of Tom. It was her chance to "be excited" about the new Tom, just like he wanted. Then, she showed up at the show, and it really did seem like she was impressed! They held hands and they even set up a date in the end. Things were looking up!

Here's a picture of them looking so freaking fabulous post-filming.

While we all ended that episode with the hope of a more permanent reunion between the estranged lovers, their love story, unfortunately, did not end quite like we had hoped, according to Tom.

Yesterday, he took to Twitter to give his fans a devastating update:

I just watched my episode for about the 20th time. I cry like a baby ever [sic] time I watch it. Just to let the world know, Abby and I are no longer together. She will always be the love of my life. I will always love her more than anything!!!!!!!

Of course, he also included some emojis for dramatic effect:

Can you imagine Tom sitting on his lawn chair outside, smoking a cigarette, sipping on one of his "redneck margaritas," watching Queer Eye through the open door while he cries? I don't know about you, but I am devastated. Just the thought of it is heart-wrenching. And people on Twitter are just as heartbroken.

They're sending him hugs.

They're here to remind him that he can do better.

And that he's a great guy!

Even his daughter chimed in to share her support.

OK, now that we've all dried off our tears, let's put some good vibes out there for Tom. Here's to hoping he finds someone new to share his love with!