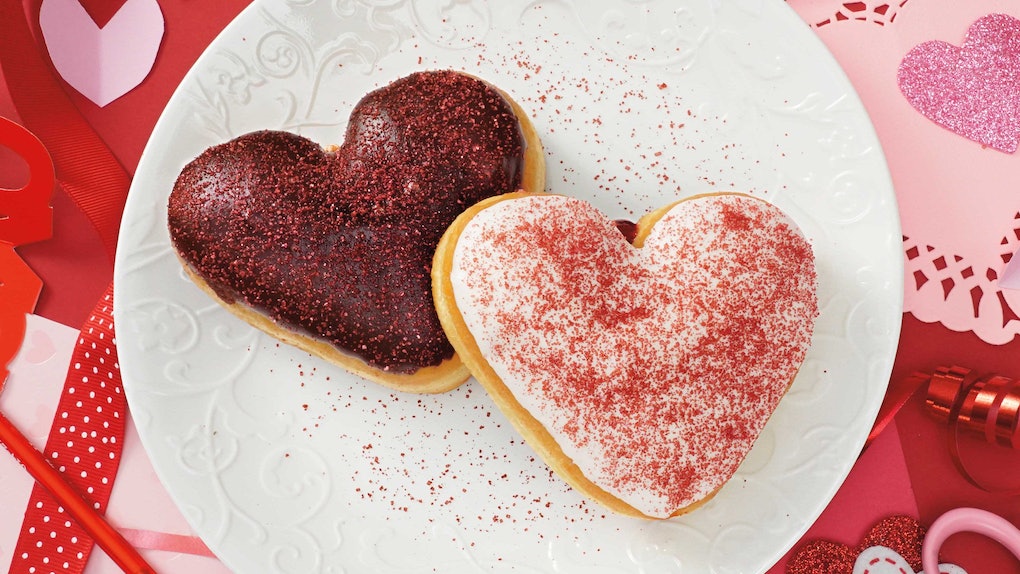 From quite a young age, I've looked forward to celebrating Valentine's Day. Even back in my single-and-ready-to-mingle days, I reveled in being able to dive face first into endless amounts of cheesy cards from my gal pals, candy hearts (may they rest in peace), and — most importantly — a wide variety of incredibly decadent desserts (which I would sometimes shamelessly buy all for myself, #SorryNotSorry!). Anyway, if you haven't already seen Tim Hortons' Valentine's Day 2019 Be Mine Donuts, they will totally make your holiday sparkle... regardless of your relationship status.

On Feb. 6, 2019, the chain known for its delectable coffee and sweet breakfast treats, Tim Hortons, will be releasing two new donuts in honor of the most romantic time of the year, according to a press release. Aside from the fact that they sound absolutely delicious, they're completely covered in *glitter*. So that's a win all by itself.

The first (and my personal favorite) flavor is known as the Vanilla Be Mine Donut, which — according to a press release — is filled with raspberry jam. It's hand-dipped in vanilla fondant, and topped off with a glitzy red shimmer, so it sparkles when the light hits its outer shell. Take a look at the photo of it, below — she's absolutely gorgeous, and TBH, it might be the ultimate Valentine.

The second flavor is totally dreamy for any choco-monster out there. I mean, it's called the Chocolate Be Mine Donut, for crying out loud. This rare treat is a a venetian cream-filled heart-shaped donut, which is delicately dipped in chocolate fondant, according to the press release. All of it is carefully sprinkled in a fabulous red shimmer, and IMO, the photo below doesn't even come close to doing it justice.

Oh, and did I mention they're sparkly? Yeah, take note of that. It's the best part.

According to the press release, Shawn Thompson, the President of Tim Hortons U.S., is very excited about sharing the new (super shimmery) flavors with their loyal fans this Valentine's Day.

According to the press release, Thompson said:

Sharing is caring and what better way to show your Valentine you care than with a donut. We encourage guests to share love and donuts with their sweetheart this Valentine’s Day with our Chocolate and Vanilla Be Mine Donuts.

Sadly, though, these donuts are V-Day themed, and they won't be around forever. In fact, according to the press release, you'll only be able to find them at participating U.S. Tim Hortons locations, and they will only be available while supplies last. The restaurant recommends calling your nearest Tim Hortons location to confirm their prices and availability beforehand, because you definitely would not want to be disappointed.

If regular chocolate and vanilla doughnuts don't quite do it for you, participating Tim Hortons locations throughout the U.S. market will be offering an entire Red Velvet line-up, according to the press release. That's right, if you crave decadent dark red-hued chocolate, look no further than the chain's Red Velvet French Vanilla, Red Velvet cookies, and most importantly, their Red Velvet muffins. Good lord, these sound heavenly.

Regardless of how you feel about Valentine's Day, I can already tell this one is going to be one for the books. Nothing can surpass the power of sparkly donuts, to be completely honest, and just so you know — eating an entire box by yourself is totally acceptable. I'm definitely not one to judge.