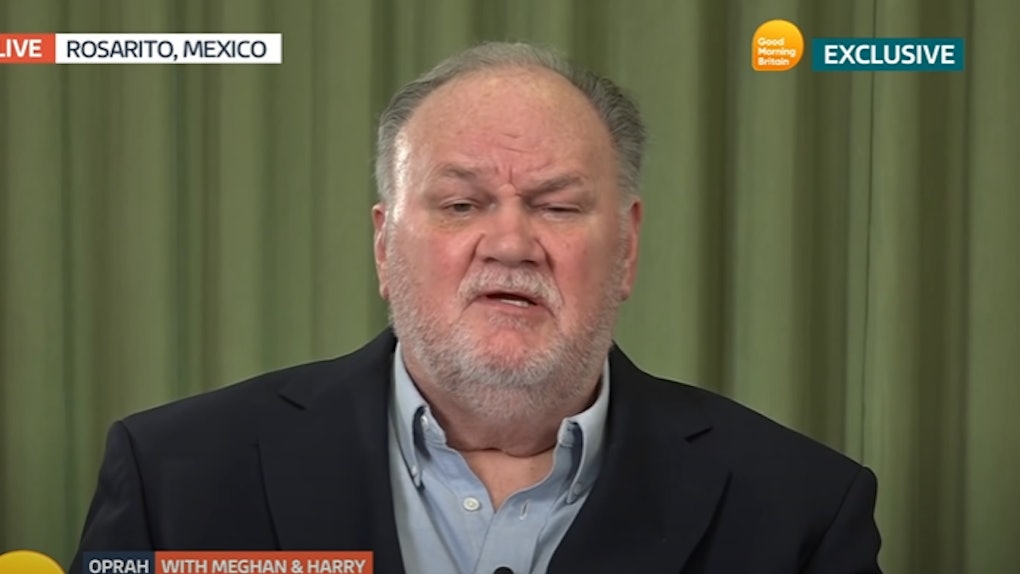 Thomas Markle's Quotes About Meghan & Harry's Oprah Interview Are Too Much

Thomas Markle was bound to comment on Meghan Markle and Prince Harry's interview with Oprah. He's spoken to the press repeatedly about his estranged relationship with his daughter, so it was only a matter of time before he shared his opinion on what happened during the television special. If you're a supporter of the royal couple, Thomas Markle's quotes about Meghan and Harry's Oprah interview will make you furious.

During the interview, which premiered on CBS on Sunday, March 7, Meghan shared her thoughts about her father speaking to the press. "For over a year, the U.K. tabloids were trying to find my dad, offering people so much money to try to find his address," Meghan said, adding that once they did, tabloids "moved into the apartment next door and across from him."

A few days before her wedding on May 19, 2018, Thomas was caught staging photos with the paparazzi, which her half-sister, Samantha Markle, confirmed on Twitter. Due to the drama surrounding the incident, Thomas decided not to attend her wedding ceremony. Since then, he's accused Meghan of distancing herself from him and the rest of her family. Oprah asked the Duchess if she felt betrayed by her father, and she admitted being unsure if she was comfortable "even talking about that."

The Duchess said she confronted him about the situation over the phone, but he didn't want to explain what really happened. "I said, 'I just need you to tell me, and if you tell me the truth, we can help,' and he wasn't able to do that," Meghan explained.

Now, just two days after the tell-all interview, Thomas appeared on Good Morning Britain to discuss what he thought about Meghan's remarks. "This is the first time I've heard her speak in four years," Thomas said. "I'm very disappointed about it. Bottom line is I’ve never heard back from Harry and Meghan in any way, shape or form."

When asked why he keeps talking to the media, Thomas admitted it's because he wants to get the couple's attention. "Because I don’t hear from them, I do a story with the press. If I don’t hear from them in 30 days, I’ll do another one. I would love to hear from them. When they decide to talk to me, I’ll stop talking to the press," he said, adding he would like to apologize to Meghan about the paparazzi photos. "I’d like to say sorry for what I’ve done but this was two years ago. I’ve tried to make up for it. But these stories in the paper are because I haven’t heard from you."

It seems Meghan and Thomas' relationship is only getting more complicated each day.