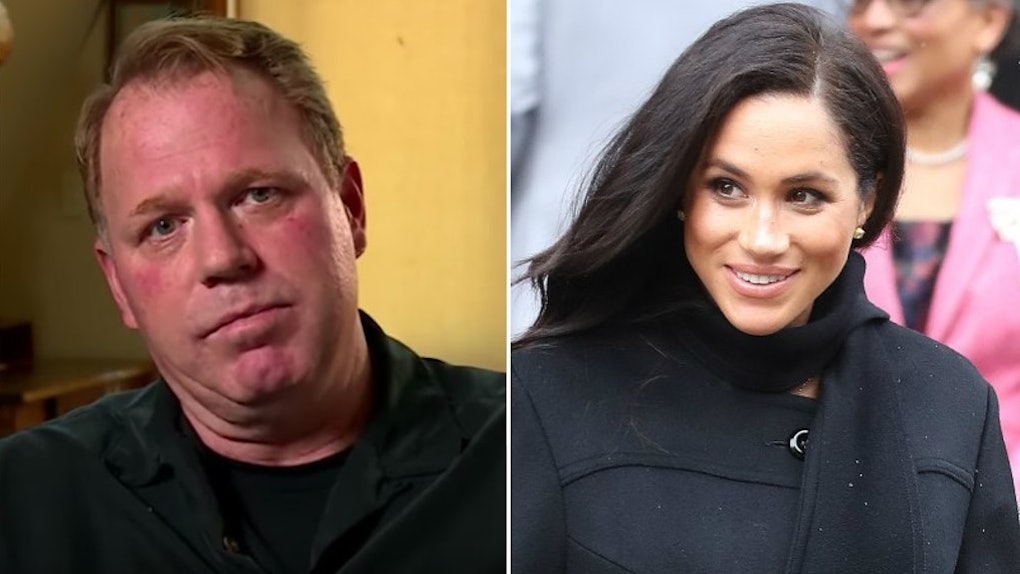 Will Meghan Markle ever get a break from her dad’s side of the family? Not if her brother has anything to do with it. According to a new report from OK! Magazine, Meghan’s brother Thomas Markle Jr. blames her for all the ups and downs the family has been dealing with over the past year. Thomas Markle Jr.’s comments blaming Meghan for their family drama are totally uncalled for. Elite Daily reached out to Kensington Palace regarding the report, but did not hear back by the time of publication.

In OK!’s report, Thomas Jr. spoke at length about why he thinks Meghan is at fault for all the family drama. In his mind, Meghan’s career is 100 percent to blame when it comes to the growing rift on the Markle side of the family.

"A lot of the distance happened between Meghan when she went to Toronto and her first big break in TV which was Suits and it turned out to be a big hit in the USA,” Thomas Jr. explained to OK! Magazine. “I think she turned into a little Hollywood starlet and she was focused on her career so much. I get it. I get being in that world because once you’re down that path you’ll do anything it takes to be successful so that had a lot to do with being distant from her whole family.”

Thomas Jr. also sides with his dad, Thomas Markle Sr., when it comes to all that has gone wrong in the months following Meghan’s wedding back in May 2018. According to Thomas Jr., his dad is “hurt” that Meghan has distanced herself even more from the family now that she’s a royal.

"He’s hurt and very confused about what happened to his relationship with his daughter and I think he’s a little more frustrated now because he’s got a grandchild coming up with his favorite person that he worshiped," Thomas Jr. said. "They had such a tight bond together and now he’s worried about if he’s ever going to get to see his grandchild. It’s a new addition to the family and now would be a perfect opportunity for the family to get back together."

While Thomas Sr.’s alleged feelings about meeting his new grandchild are valid, they don’t take away from the fact that he apparently leaked a private letter that Meghan sent him after her wedding. The letter was a direct response to all the drama that ensued in the weeks leading up to Meghan’s wedding, including Thomas Sr. negotiating and posing for paparazzi photos.

In the letter, which was leaked to the Daily Mail, Meghan reveals that her dad’s actions were heartbreaking to her.

“Your actions have broken my heart into a million pieces — not simply because you have manufactured such unnecessary and unwarranted pain, but by making the choice to not tell the truth as you are puppeteered in this. Something I will never understand,” Meghan wrote, according to the Daily Mail.

So, the whole situation is a lot more complicated than Meghan going to Hollywood, becoming famous, and keeping her unborn child from her dad’s side of the family. The drama goes way deeper than that and will probably take a lot of time and effort to heal, if it ever does.