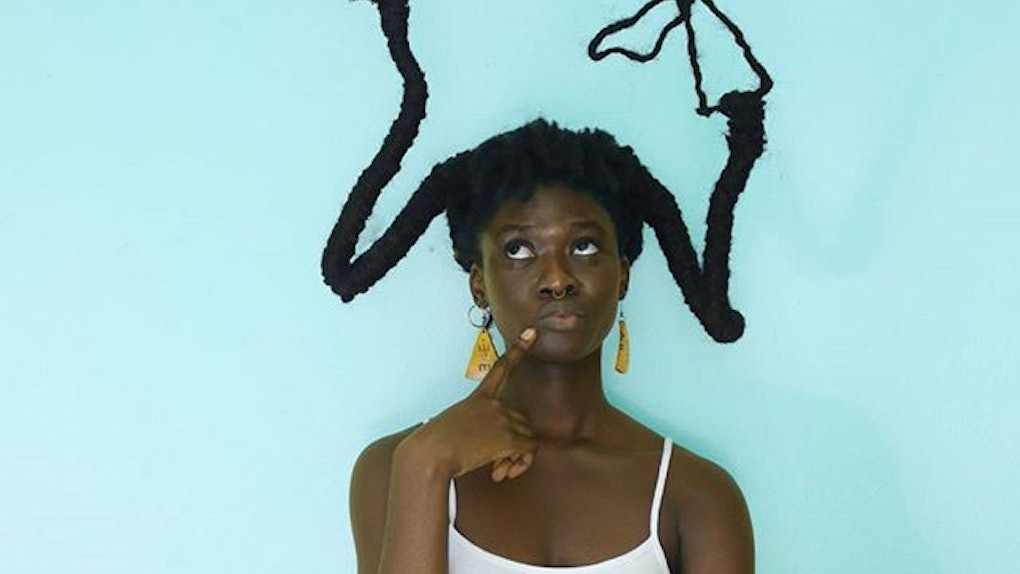 Whether sculpted in the chairs of celebrity stylists or on the living floor, between a mother’s knees, black hair has always been a dynamic art medium. Just recently, hair artists such as Shani Crowe and Joanne Petit-Frére have received well-deserved attention for styling celebrity hair and gaining recognition for the craft as an art form. Now, 21-year-old artist Laetitia Ky who uses her hair to create art, is joining in the movement to not only showcase her remarkable talent, but to also call attention to issues plaguing women in our society.

Not only is Ky, who is from the Ivory Coast in West Africa, the architect of these vanguard styles, she is also her own canvas. The results of her creativity could accurately be characterized as head-turning, but according to Ky, it’s never available for public consumption outside of the pictures she posts online. After molding and documenting the awe-inspiring sculptures, which can take anywhere from 20 minutes to two hours, she dismantles them.

In an interview with Elite Daily, Ky tells us how she got started making her unique hair art. While her mother taught her how to braid her own hair at a very young age, she’s only been fashioning her hair into the creations that can now be found all over the internet for about a year. In that short time, her imaginative coiffing has understandably attracted a flood of attention, garnering her more than 55,000 followers on Instagram.

For the most part, Ky says she's experienced an outpouring of praise and support but, as is customary of any artist creating their own waves, there are those who've been less receptive. Some Instagram users have expressed that they don’t understand the point of crafting hairstyles that take hours, only to have to take it apart. Ky says some followers have even gone so far as to suggest that her hair art is "witchcraft." However, the negative comments don't seem to be slowing her down. Ky says, “I only remember the positive. We cannot please everyone anyway.”

Her intricately styled, gravity-defying hair often shows straightforward images, like a teapot pouring liquid into a teacup or hands holding flowers. Depending and her mood and the feeling she is trying to convey, the 3-D shapes atop her crown, coupled with a coordinating facial expression, range from audacious to sweet. On occasion, they send gut-punching messages of resistance.

Hair, particularly among black women, has been and continues to be the subject of controversy and a symbol of black women's refusal to assimilate to a culture that is often non-inclusive. More than just a popular hairstyle in the '60s and '70s, the afro became, in itself, an unspoken political message of the Black Power movement in the fight against racial inequality. Ky is continuing that legacy and using her hair to comment on social issues that she cares about.

As an homage to the #MeToo movement, she created a scene of a man pulling at a woman’s skirt and she throws up her arms in protest. This image, posted on her Instagram, began with the caption, “Thousands of women are raped every day in the world, but very few are able to talk about it, to complain or fight.” The photo was met with hundreds of responses from women thanking Ky for speaking on such an important issue.

Before adding her voice to the issue of sexual assault and harassment, she tells Elite Daily that her work was always a part of social commentary. “The whole idea of ​​the whole concept is social because it promotes the enhancement of black beauty, self-confidence and self-love. It will be hard for me to tell you exactly when I started fighting with what I am doing, but it must have happened [organically] because I am naturally committed to the issues that are close to my heart.”

Ky says she was inspired by images she’d seen of women's hairstyles from various African tribes and she, similarly, hopes her Instagram will be a source of motivation to create and encourage young women to indulge in self-love. But there’s someone in particular who she hopes her art will reach.

“I hope my art will touch Rihanna,” she said, explaining that she’d been a devoted fan of the songstress, beauty maven, and all-around role model for a decade. “She is true, strong, intelligent, enterprising, and extremely inspiring! In short, her whole aura is exceptional and I think that I would go crazy if one day she liked one of my photos on Instagram.”

With a growing following and her ever-changing styles, we're guessing it might not be much longer before more tune into Ky's message and hair mission.